Genocide in Darfur, then and now

The genocidal campaign against Darfur was only part of the crimes of the Bashir regime after Omar al-Bashir took power through a military coup in 1989. 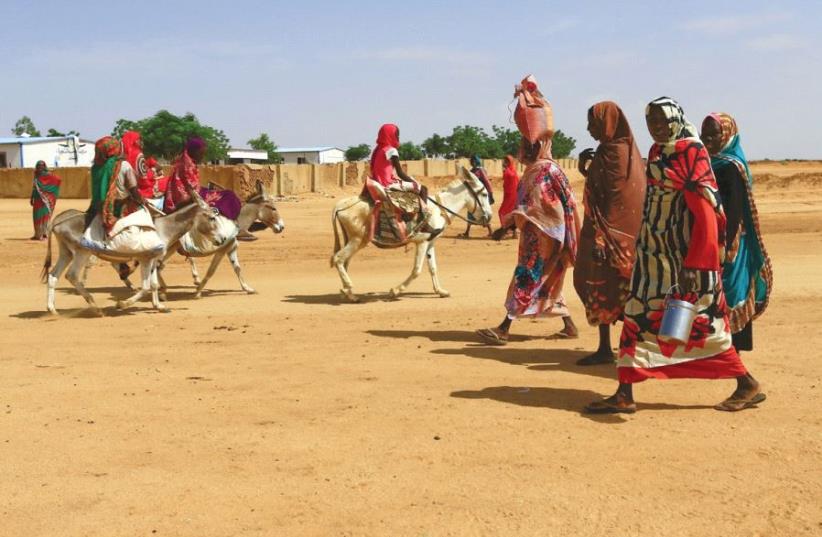 WOMEN WALK to the market in Abu Shock IDPs camp in Al Fashir, capital of North Darfur, Sudan, last year.
(photo credit: REUTERS)
Advertisement
More than 2.6 million Darfurians still dwell in squalor in Internally Displaced Persons (IDP) camps in Darfur.Over 300,000, mostly women and children, live in Chad and another 100,000 in UNHCR refugee camps in Ethiopia. Israel has several thousand Sudanese asylum seekers, mostly from Darfur. These people are witnesses to genocide. They follow political events in Sudan closely and know that the genocide policies that shocked the world in the past persist.The Darfur uprising began in February 2003 when insurgents attacked government facilities in El Fashir. The rebels demanded the end of discrimination against Darfur’s non-Arab Muslim African inhabitants and a federal system granting Darfur greater autonomy.In 2004, the Sudanese government launched a massive military campaign to crush the Sudan Liberation Army (SLA) and the Justice and Equality Movement (JEM), the two main rebel movements in the region. The Sudanese Armed Forces (SAF) targeted civilian populations and armed local Arab-dominated Janjaweed militias to drive the inhabitants out of their villages and take over their land. The army and militias bombed, burned and looted villages, destroyed food and systematically raped women.In April 2004, Eli Wiesel, Holocaust survivor and Nobel Prize winner, began a campaign to alert public opinion to the atrocities taking place in Sudan. The cries of “Save Darfur!” and “Never Again!” resounded throughout America.The campaign aroused world condemnation.On September 9, 2004, US secretary of state Colin Powell declared that the situation in Darfur constituted genocide. International pressure prodded the regime to temporarily moderate its attacks on Darfur’s civilian populations and accept external humanitarian aid to ease their plight while rejecting military intervention to stop the carnage.In 2007, the United Nations authorized a UN peace-keeping force (UNAMID) to safeguard the lives of the tens of thousands of Darfurians living in IDP camps.While UNAMID provided some protection, it was unable to stop attacks on women and other individuals venturing outside the camps in search of food, water and firewood.That same year, Sudan attempted to silence regime critics and organizations monitoring human rights violations by shutting down 13 international humanitarian and human rights NGOs and national human rights organizations.Attacks on civilian populations continued relentlessly, forcing more people to leave their homes and seek refuge elsewhere – in IDP camps, refugee camps in neighboring countries, and asylum in Europe, America and Israel.A decade later, media coverage had shifted away from Darfur to other world trouble spots – e.g., the devastating civil wars in Syria, South Sudan and Yemen, the refugee crisis in Europe, and the rise of Islamic State and terrorist attacks in America and Europe.The genocidal campaign against Darfur was only part of the crimes of the Bashir regime after Omar al-Bashir took power through a military coup in 1989. Hassan al-Turabi, a close ally of Bashir, urged him to make Sudan the ideological leader of radical anti-Western Islamist movements in Africa and the Middle East. The Bashir regime tried and failed to impose Islam and Shariah law on the predominantly Christian and Animist populations in South Sudan. The result was a long and bloody civil war, eventually leading to South Sudan’s independence in 2011. Sudan welcomed Osama bin-Laden as well as the support of Iran, which provided military training and intelligence, weapons and planes used to crush the non-Arab Muslim populations of Darfur, Kordofan and Blue Nile regions. The Bashir regime also sent convoys to deliver arms to Hamas to be used against Israel.International criticism and pressure on Sudan has steadily declined over the past three years, even though Sudan has not changed its genocidal policies in Darfur.The International Court of Justice (ICC) indicted Bashir and other senior officials for crimes against humanity and issued warrants to have Bashir arrested in December 2009. Citing the lack of support and cooperation from the UN Security Council and African states, the ICC decided to drop its efforts to have Bashir arrested in December 2014.The acute refugee crisis in Europe softened the European Union’s critical stance toward Sudan. Now it sees Sudan as Europe’s partner in restricting African migration to the continent. The US increasingly regards Sudan as an important source of intelligence concerning al-Qaida, Islamic State (ISIS) and other radical Islamist terrorist groups rather than a perpetuator of genocide and has loosened sanctions on the Bashir regime.After breaking with Iran and aligning itself with the Saudi-led Sunni Arab alliance in 2015, Sudan received $5 billion from Saudi Arabia to shore up the Bashir regime, threatened by economic collapse and growing political opposition.A recent Amnesty International report documented the use of chemical weapons against civilians in Darfur’s Jebel Marra region from January 2016 through August 2016. The report contains photos of scarred children and accounts of people gasping for breath from “poisoned air.”Despite overwhelming evidence that Sudan had used chemical weapons, the Organization for the Prohibition of Chemical Weapons (OPCW) elected Sudan to be one of its three deputy chairs, in March 2017, only a few weeks before the world reacted in shock and outrage following graphic media coverage of Syria’s employment of chemical weapons on civilian populations in Khan Sheikhun.Claiming that the conflict in Darfur was over and the rebels defeated, Bashir intends to close the IDP camps. The Sudanese government is pressuring UNAMID forces to leave and has signed an agreement with the UNHCR in Chad to send Sudanese refugees back to their homes.The departure of UNAMID and the weakening of rebel forces will leave the people of Darfur unprotected and more vulnerable to genocidal assaults.Most IDPs in the Darfur region and the refugees in Chad don’t want to leave the camps because they don’t trust the Sudanese government.They fear they will be attacked or killed if they attempt return home.“Save Darfur” and “Never Again!” no longer resound around the world. The main hope for ending the genocide now lies with the growing political opposition demanding regime change and a transition to democracy and those continuing to risk their lives to make this happen.

The author is an Africanist scholar and consultant specializing in democracy, development and religion and politics issues in Africa and the author of Senegal: An African Nation Between Islam and the West.
Advertisement
Subscribe for our daily newsletter