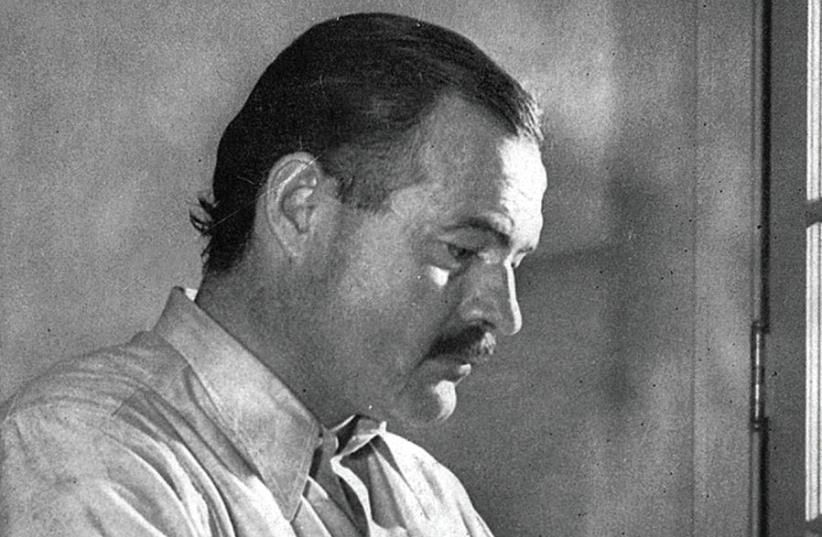 Ernest Hemingway
(photo credit: Wikimedia Commons)
Advertisement
Nostrils flare dripping with venomous anger, the eyes are big, onyx and lifeless; crimson blood pours from its back consecrating the arena; the front hooves beat the ground relentlessly as dust, sweat and rage hang heavy in the afternoon sun; it snorts and roars with contempt; the head, crowned with piercing horns, is lowered; and the pent-up energy is unleashed with a furious charge at the taunting matador who turns on his axis elegantly to enshroud the incensed bull in his blood red cape as man and beast engage in a choreographed macabre dance of death. It was at the Pamplona Fiesta in Spain in the 1920s that Hemingway fell in love with the metaphysics of bullfighting, which became a metaphor for his search for meaning and the essence of life and death. The result of this quasi-religious experience was his masterpiece Death in the Afternoon. Not surprisingly, Hemingway intensely admired Sidney Franklin, a sublime bullfighter, who was born in Brooklyn, New York to Orthodox Jewish parents. Writing in Death in the Afternoon, Ernest Hemingway said, “Franklin is brave with a cold, serene and intelligent valor, but instead of being awkward and ignorant, he is one of the most skillful, graceful and slow manipulators of a cape fighting today. His repertoire with the cape is enormous, but he does not attempt by a varied repertoire to escape from the performance of the veronica as the base of his cape work and his veronicas are classical, very emotional, and beautifully timed and executed. You will find no Spaniard who ever saw him fight who will deny his artistry and excellence with the cape.” Hemingway adds, “He is a better, more scientific, more intelligent, and more finished matador than all but about six of the full matadors in Spain today and the bullfighters know it and have the utmost respect for him.” In his book Double-Edged Sword: The Many Lives of Hemingway’s Friend, the American Matador Sidney Franklin, Paul Bart observes that Death in the Afternoon describes Franklin as having the “ability in languages, the cold courage and the ability to command of the typical soldier of fortune.” “Yet Franklin wasn’t any kind of soldier,” writes Bart, “resembling instead the womanly Europa in the classical Greek myth where Zeus disguises himself as a bull to rape Europa.” Benjamin Ivry expands on the theme of rape when he writes that Franklin’s bullfighting career was punctuated by genuine violations of his body. In a particularly horrific 1930 episode requiring multiple surgeries, a dying bull’s horn “caught Sidney at the base of his tailbone, plunging into his abdominal cavity through the rectum, piercing the sphincter muscle and large intestine.” Franklin repeatedly risked similar gory disasters long after this 1930 catastrophe. One wonders if his courage in looking death in the eyes and never averting his gaze compensated for his deeply felt sense of inadequacy due to his unorthodox sexual preferences; a desire that dare not speak its name had to be sublimated and buried in the sands of the corridas drenched in blood. When the Spanish Civil War erupted, Franklin sided with Franco, who was also among his admirers, under whose aegis he continued to perform. Before the result of the war was determined, he tagged along as a paid interpreter while Hemingway and director Joris Ivens filmed the classic documentary of Spain’s doomed war against nationalism, The Spanish Earth. He eventually fell out with Hemingway as casting his lot with the Spanish Phalange, after personally witnessing the tragic Republican effort, was simply reprehensible to the author. Hemingway, like George Orwell and Andre Malraux, fought against Franco and wrote about the war. For many, the turning point came when Nazi bombers appeared over the skies of Guernica, transforming the sleepy market town into an everlasting symbol of the atrocity of war in 1937. Immortalized by Picasso’s grey, black and white painting, Guernica was a prelude to Hitler’s and Mussolini’s crimes in the approaching global calamity. His friends back in the USA were furious with Franklin after the Spanish Nationalists murdered the poet Federico Garcia Lorca. Other Jews like Milt Wolff, fighting with Spain’s Abraham Lincoln Battalion for the Republicans, were also unforgiving. Perhaps Franklin, counter-intuitively seeking death through the excitement of life, as epitomized by bullfighting, was also trying to exorcise his personal demons by cleansing his sins with blood: either the bull’s or his. After the war, his days as a matador behind him, Franklin appeared in a few films in the USA and Mexico. Later he presented bullfights on American TV. He wrote an autobiography, Bullfighter from Brooklyn, and he also was a close friend of the American actor and legend James Dean, who was a big fan of the art of Plaza de Toros. Hemingway, who had parted company with him, paid him the ultimate tribute in the last chapter of Death in the Afternoon when he concluded: “I can tell you truly, all question of race and nationality aside, that with the cape he is a great and fine artist and no history of bullfighting that is ever written can be complete unless it gives him the space he is entitled to.’ The “Matador of the Torah,” as he was known in Spain, died in obscurity in an old age residence in New York in 1976. Federico Garcia Lorca’s famous quote, “As I have not worried to be born, I do not worry to die” could have been Franklin’s epitaph. Erol Araf is a Montreal-based strategic planning consultant and writer.