Humanity’s march, from Nuremberg to today 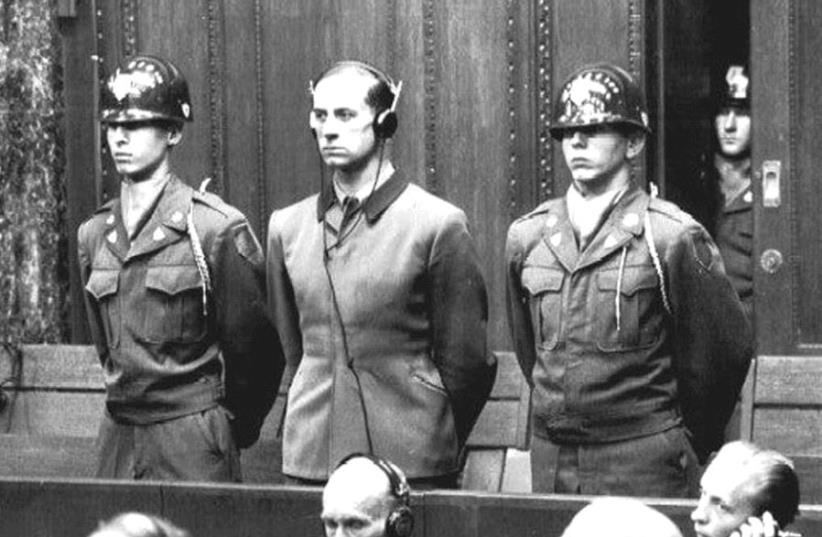 Karl Brandt stands trial at Nuremberg
(photo credit: Wikimedia Commons)
Advertisement
People in Germany and observers who were farther away always knew much about the hatreds and evils of Adolf Hitler and his followers.From the antisemitism of Mein Kampf, to the implementation of policies that oppressed German Jews and other “enemies,” to the devastation of war and military occupations across the European continent, Nazi Germany was no mystery.But for many, specific, detailed knowledge of these evils was lacking at first, or beyond the comprehension that marks true knowledge.The Nuremberg Trials, commenced in Allied-occupied former Germany in fall 1945 and continuing until spring 1949, were the beginning of, and they made possible, the widespread understanding, based on evidence, of the Nazis’ genocidal conduct.At first, even Nuremberg’s chief architects struggled to comprehend the enormity of the crimes that they were prosecuting. In June 1945, US Supreme Court justice Robert H.Jackson, appointed by President Truman to serve as US lead prosecutor of the surviving Nazis, was incredulous when one of his principal Jewish advisers told him that “six million” European Jews had been “exterminated” by the Nazis.Justice Jackson insisted on proof.Five months later, when Jackson made his opening statement at the first Nuremberg trial, he described the evidence that the Allies would offer: The conspiracy or common plan to exterminate the Jew was so methodically and thoroughly pursued that despite the German defeat and Nazi prostration, this Nazi aim largely has succeeded. Only remnants of the European Jewish population remain in Germany, in the countries which Germany occupied, and in those which were her satellites or collaborators. Of the 9,600,000 Jews who lived in Nazi-dominated Europe, 60 percent are authoritatively estimated to have perished. Five million seven hundred thousand Jews are missing from the countries in which they formerly lived, and over 4,500,000 cannot be accounted for by the normal death rate nor by immigration; nor are they included among displaced persons. History does not record a crime ever perpetrated against so many victims or one ever carried out with such calculated cruelty.The 1945-46 Nuremberg Trial delivered the evidence of those crimes.Some was in Nazi documents. Some came from victims, including an Auschwitz survivor. Other evidence came from the mouths of perpetrators – in April 1946, for example, former Auschwitz commandant Rudolf Hoess testified that “at least 2,500,000 victims were executed and exterminated there by gassing and burning...”Subsequent Nuremberg trials, especially the Einsatzgruppen case 70 years ago (1947) that revealed the million-plus murders of Jews and others by killing teams in Nazi-occupied nations to the east, proved and thus helped the world to begin to comprehend the enormity and evil of the Shoah.In addition to educating the world about Nazi crimes, antisemitism, and the suffering of victims, the Nuremberg Trials also demonstrated that law and governments can hold perpetrators accountable. Indeed, the trials were an impetus for global support of the creation of the State of Israel and, in time, its apprehension and prosecution of Adolf Eichmann.The March of Living physically embodies those Nuremberg achievements.The march shows and teaches, in Auschwitz and Birkenau, the enormous, incontrovertible horrors of hatred, and the victory of those who opposed it during World War II.The thousands who participate each year in the March of the Living carry forward the memories of the lost, the inspiration drawn from survivors, and the vital legacies of those who, including at Nuremberg, took the side of humanity.

John Q. Barrett, a professor of law at St. John’s University in New York City, is a biographer of Justice Robert H. Jackson. Professor Barrett participated last year in the March of the Living, and in its conference in Krakow on the 70th anniversary of the Nuremberg Trials.