ISIS will attack synagogues and churches 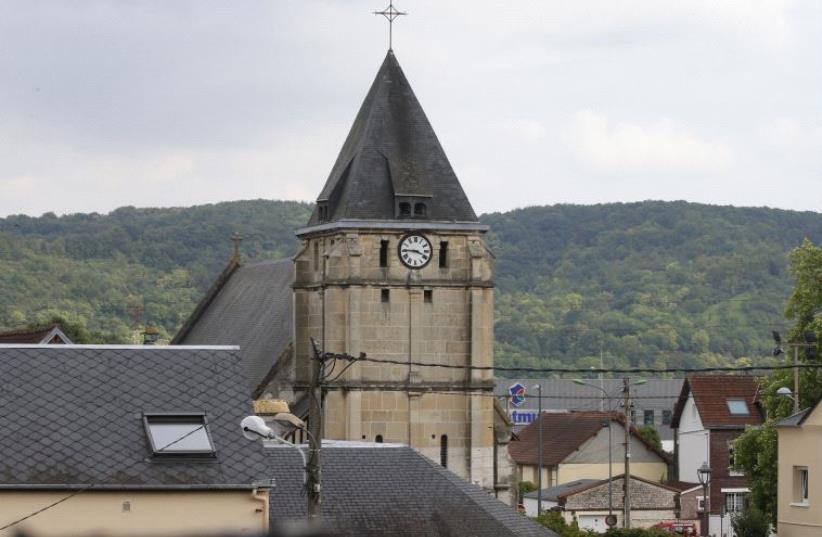 ISIS militants attack church in Normandy, France
(photo credit: REUTERS)
Advertisement
Details of the recent attack in Normandy, France, are horrifying, but the attack itself should not have come as a surprise.The Islamic State (ISIS) terrorists proclaimed their allegiance to the Caliphate as they carried out their gruesome deed. One of the terrorists, Adel Kermiche, was known to police. He wore an electronic tracking bracelet most of the day except between 8:30 a.m. and 12:30 p.m., following two failed attempts to travel to Syria. The murder of Father Jacques Hamel was committed at 9:43 a.m.When Sid Ghlam was arrested in April 2015 on suspicion of planning terrorist attacks, the Saint Etienne du Rouvray church was on his list of targets to be pursued.Ghlam had already been in contact with an ISIS leader in Syria who ordered him to strike churches and actually listed the church in Saint Etienne du Rouvray as a prime target.ISIS has been proclaiming its intention to attack churches and infidels since it first emerged on the scene. To date, it has successfully murdered thousands of Christians living within ISIS-controlled territories. So brutal were the murders of these Christians that most Internet and news sites never show the images. There are pictures of slaughtered Christian children, pictures of the heads of children atop poles in a park in Mosul.Time and time again spokesmen for ISIS call on adherents to strike at the infidel in the heartland – not in Syria or Iraq, but in the Western world. ISIS recruiters have been telling their recruits that they are not needed in Iraq and Syria. Telling them that their actions will be more worthy and significant when they attack infidels in their own lands.Here are quotes from an ISIS spokesman during a 42-minute audio post. The post is online and available for all to hear. No secret password needed.Speaking to Muslims, he says: “If you can kill a disbelieving American or European, especially the spiteful and filthy French, or an Australian, or a Canadian or any other disbeliever, then rely upon Allah, and kill him in any manner or way however it may be.”He continues, now speaking to the West: “You will not be safe, even in your own bedrooms while you sleep. Your Crusader campaign will fail. You will pay the price and we will hit you on your home front in a way that will cripple you to never extend your long arm ever again.”There is even an ISIS propaganda image sent around the world through ISIS media depicting an ISIS fighter waving a flag while perched atop a European church.The caption reads: “Truly, we will fight you even in your churches until we raise there that the name of Allah is the only God.”Much of ISIS propaganda quotes from Islamic thinkers like 14th century cleric Ibn Rajab, who wrote, “in charity it is permitted to kill people and animals in the easiest way... the easiest way is to strike off the neck with the sword of violence.” Quoting from the Koran, Ibn Rajab continued, “when you meet non-believers strike off their heads.”And yet, despite all these pronouncements and all the acts of murder and terrorism, leaders are shocked anew each and every time by ISIS’ actions.Shame on them. Shame on their naivety. Shame on them for being shocked.Vatican spokesman Rev. Frederico Lombardi termed the execution of the Normandy priest “evil.” Why? “Because this horrific violence took place in a church, a sacred place in which love of God is announced, and the barbaric murder of a priest and the involvement of the faithful.”ISIS is committed to the murder of priests in their churches.This murder of the French priest has been called “barbaric” by many religious leaders – but that hardly describes the horror. Greeks, Romans and Christians all used the word “barbaric” in the same way. It meant the behavior of someone outside their culture. Plato rejected this word, writing in his epic work The Statesman that the Greek-Barbarian dichotomy was logically absurd because it said nothing about the barbarian, only that it was “the other.”Calling it barbaric is as ridiculous as saying that churches and synagogues should be off limits for ISIS.ISIS terrorist attack fellow Muslims in mosques in the midst of prayer and during pilgrimages. They attack and murder each other because others do not all believe in the same shade of Islam.If ISIS attacks Muslim religious sites how can anyone expect ISIS to respect the religious sites of infidel Christians and Jews. We are targets. I repeat: we are targets. Do not expect ISIS to grow a conscience and change their ways. The responsibility is ours to protect and secure ourselves and our religious sites.