The emphasis on water – and the talk about making the desert bloom – accelerated after independence in May 1948. 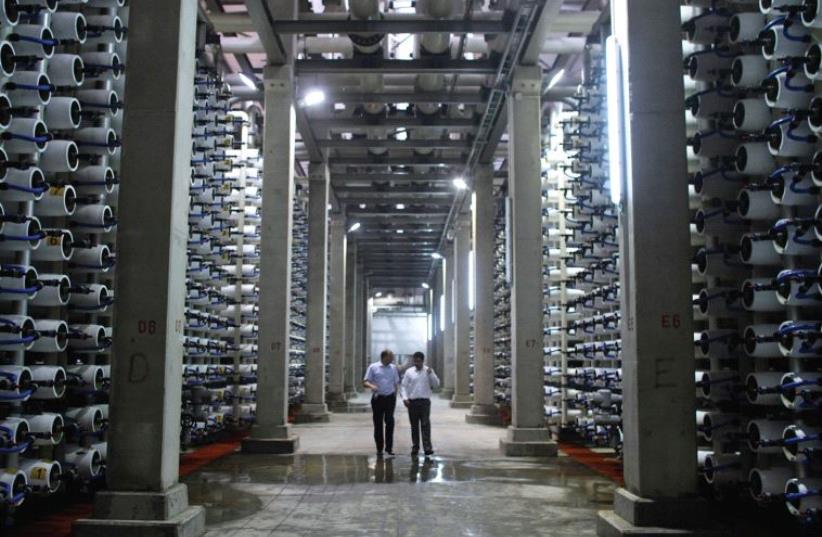 An Israeli desalination plant.
(photo credit: REUTERS)
Advertisement
There isn’t a high school student in Israel who doesn’t know about the War of Independence, the Six Day War and the audacious raid at Entebbe among other Israeli triumphs on land, sea and air. Far less known to most – yet with potentially greater impact and reach – is Israel’s triumph over nature and its current water abundance in a time of growing global scarcity.Long before the state was founded, the Zionist leadership made water a priority the equal of the far better known concerns around defense and the absorption of immigrants. The diaries and letters of the pre-state leaders were filled with a worry that there be adequate water to grow food for what they accurately foresaw as a rapidly a growing population.This emphasis on water – and the talk about making the desert bloom – accelerated after independence in May 1948.While other newly decolonialized countries of that era put their focus elsewhere or sabotaged their future by diverting public money for corrupt purposes, Israel – even while still barely able to pay its bills – embarked on large infrastructure projects such as the National WWater Carrier, to bring water from the Sea of Galilee to the Center and the South. The government also began experimentation in a range of water technologies, ultimately, and most significantly, in desalination.Israel also had the good fortune of having a now-forgotten hero, Simcha Blass, as head of its water planning for decades.But when Blass got into a principled dispute with leaders such as David Ben-Gurion, Levi Eshkol and Pinchas Sapir in 1959, he resigned from public life and retired to a two-room apartment in Tel Aviv. A short time later, in remarkable circumstances, Blass began a second career as the inventor of drip irrigation, a water-saving technology that is being speedily adopted in water-scarce nations all over the world.With the US government predicting that 60 percent of the world’s land mass and billions of people will soon be affected by often crippling water scarcity, Israel’s many decades of smart water practices will not only insulate the country from the worst consequences of the global drying out, but will also offer it an opportunity to help the world with what could be the gravest world problem of the coming 25 years.For many years, Israel has offered its water expertise to less developed countries as well as to the Palestinians in the West Bank and, until recently, the Gaza Strip. Egypt and the Kingdom of Jordan have also benefited from Israeli knowhow and training as have more than 100 countries at one time or another.The early Zionists, quoting the prophet Isaiah, spoke of the re-born Israel being a “light unto the nations.” A water-starved world will be in ever greater need of the water wisdom and techniques Israel has developed, opening the door to commercial opportunities and to enhanced diplomacy around the world, and offering a powerful response to antagonists’ BDS efforts.Seth Siegel is the author of Let There Be Water: Israel’s Solution for a Water- Starved World, the New York Times bestselling account of how Israel developed the most advanced water system in the world, now available in Hebrew as Maavak al Kol Tipa (Sella Meir Publishing).