The NRA, the chief guardian of America’s gun culture, rationalizes the propriety of private citizens owning weapons of war and lobbies successfully to thwart numerous proposals for gun control. 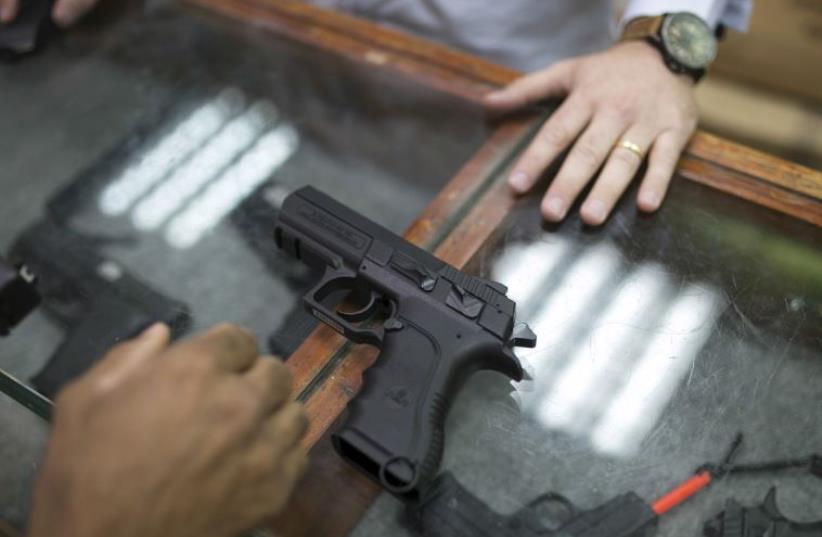 A man looks at guns in a gun shop in Tel Aviv, October 20, following a wave of stabbings by Palestinians that led Israelis to look to self-defense measures
(photo credit: REUTERS)
Advertisement
The latest gun massacre of innocent civilians in the United States once again draws focus to what some have described as that country’s “gun culture” – a supposed legacy of the wild frontier period and of the Constitution supposedly guaranteeing the absolute right to bear arms. However, is it an American’s right to own a military- style assault weapon designed solely for mass murder? Gun culture may be defined by the numbers. Americans own more guns per capita than any other people in the world. According to UN figures, the US has more firearms than the 23 countries that rank behind it combined. The Japanese own some 710,000 guns, or 0.6 per 100 persons. In contrast, Americans own some 270 million guns, or 88.8 firearms per 100 persons.“We make it very easy for individuals who are troubled or disturbed or want to engage in violent acts to get very powerful weapons very quickly, and that’s a problem,” President Barack Obama said Monday.The National Rifle Association, the chief guardian of America’s gun culture, rationalizes the propriety of private citizens owning weapons of war and lobbies successfully to thwart numerous proposals for gun control. The NRA calls the AR-15 (the civilian version of the M-16) “the most popular rifle on the market today.” Twenty-five percent of all rifles manufactured in the United States are AR-15s and Americans buy about a million of them each year. The NRA says these are for “personal protection, marksmanship competitions and high-powered hunting.”The NRA leaves out mass murder. Before last week’s Orlando gunman murdered 49 people and wounded 53, the weapon was used to kill 14 workers in December 2015 in San Bernardino, California; to murder 20 elementary schoolchildren and six adults in December 2012 at Sandy Hook Elementary School in Newtown, Connecticut; and to slaughter 14 moviegoers in July 2012 at a theater in Aurora, Colorado – to cite just a few killings.According to the Law Center to Prevent Gun Violence, unbelievably, sales of the weapon have spiked nationally following each mass shooting. “It is no wonder that this weapon was chosen by [the Orlando] shooter, as it has been by so many before him and as it undoubtedly will be again,” Josh Koskoff, a lawyer representing families bereaved by the Sandy Hook massacre, said in a statement Sunday. “It is the gold standard for killing the enemy in battle, just as it has become the gold standard for mass murder of innocent civilians.”In 1994, a federal assault weapons ban was enacted, but Congress, spurred by the NRA, allowed it to expire in 2004.Since then deranged gunmen have used these weapons to massacre people in a nightclub, church, schools and movie theaters. Only seven states out of 50 – California, Connecticut, Hawaii, Maryland, Massachusetts, New Jersey and New York, and the District of Columbia – have passed laws banning assault weapons.Florida, the proud state with one of the weakest gun control policies in the US, not only does not require background checks on private gun sales, but also doesn’t regulate assault weapons or large capacity ammunition magazines.Retired US Supreme Court chief justice Warren E. Burger wrote: “Nor does anyone seriously question that the Constitution protects the right of hunters to own and keep sporting guns for hunting game any more than anyone would challenge the right to own and keep fishing rods and other equipment for fishing – or to own automobiles.”In the spirit of democratic solidarity, Israel should offer President Obama the benefits of its rather stricter gun control law. Unlike in America, where possessing firearms is considered a right, Israelis understand that this is a privilege.Only certain categories may possess firearms: IDF reservist regimental commanders; ex-special forces enlisted men; retired police sergeants and above; settlers; licensed hunters; licensed animal-control officers.To obtain a firearms license, an applicant must be a resident of Israel for at least three years, pass background checks in health, mental and criminal history, and pass a weapons-training course. Gun owners must renew licenses, re-take a shooting course every three years, and pass a psychological exam every six years. Israel rejects some 40 percent of applicants for firearms permits.According to the UN, in 2013, the homicide rate in the US per 100,000 inhabitants was 3.8, while Israel’s was about half that, 1.8 in 2012. The difference is the price of playing gun politics.