It was the Jewish people through the Bible who gave to humanity this gift of literary authority. 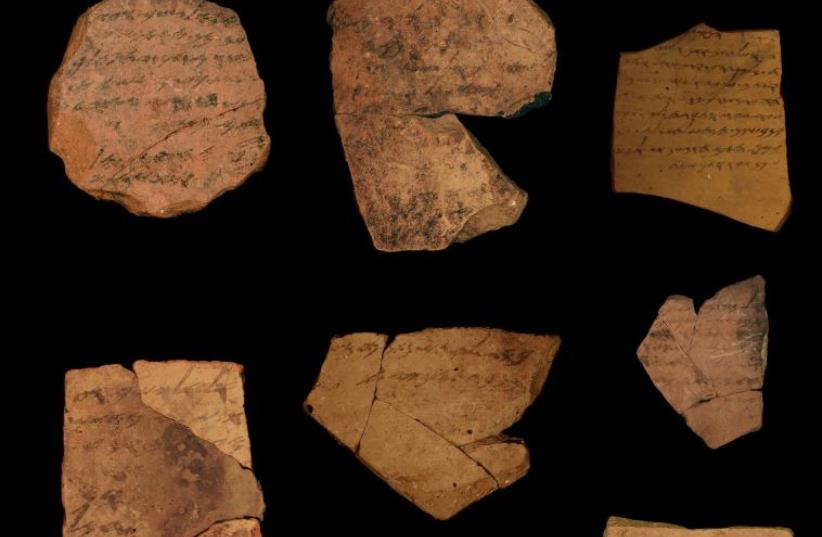 An ancient correspondence from local military personnel stationed at thefortress of Arad, located in southern Judah, dating to the latest phase of the First Temple Period in 600 BCE.
(photo credit: MICHAEL CORDONSKY)
Advertisement
A study conjecturing that the Bible might have been written earlier than previously thought has generated excitement and debate not just inside Israel but around the world.International media outlets such as The New York Times, The Daily Beast and The Guardian reported on the findings.Some experts voiced skepticism about whether the study supports the claim it makes.But what is newsworthy is not so much whether the Bible was written earlier than previously thought; rather, it is the fact that an ancient text and the ancient people whose story it tells continue to fascinate the world.A Tel Aviv University study combining archeology, Jewish history and applied mathematics seems to have proven that literacy among Jews was widespread at an early stage in history. And this might have implications for when the biblical text was written down.Around 600 BCE, years before Nebuchadnezzar destroyed the First Temple, Eliashib, the quartermaster of a remote desert fortress in Arad, received instructions in writing.Low-ranking Jewish soldiers who served in the fortress with Eliashib might have been literate as well.The study used a trove of about 100 missives inscribed in ink on pieces of pottery known as the Arad ostraca that were unearthed near the Dead Sea decades ago. The missives read like shopping lists and include requests for wine, flour and oil. Analysis of the handwriting proves that at least six people took part in the writing at the tiny, far-flung outpost which probably had about 30 soldiers.The widespread literacy demonstrated by the study appears to disprove a previously held theory that the main body of biblical literature could not have been written down in anything like its present form until after the destruction of the First Temple, because literacy was previously not high enough to support such an undertaking.Still, skeptics claim that the study does not prove widespread literacy. After all, none of the texts discovered in Arad was a fragment of the Bible. It might be true that more Jews were writing before the destruction of the First Temple than previously thought. But this does not necessarily mean that the Bible was written at this time as well.Normally scholars look to the biblical text for cultural or historical clues as to the date of its authorship.Also, the ability to compose shopping lists does not necessarily prove the sort of literacy needed to compose complex biblical texts. And many of the findings at Arad might have arrived there from other places, which means that the authors would not have been the low-ranking soldiers serving there but elite scholars located in cultural centers such as Jerusalem.Whether or not the Tel Aviv University study proves what it says it proves, it is amazing that so many people care so much about an ancient text.What explains the interest? At least part of the reason lies in the Bible’s – and the Jewish people’s – most enduring legacy: the idea that a text can be considered holy and authoritative and therefore become the foundation for a shared culture and community.Today nearly every society imaginable is organized around a text. Nations have constitutions or declarations of independence; political parties have platforms; corporations and organizations have mission statements.It was the Jewish people through the Bible who gave to humanity this gift of literary authority. One may or may not believe that the Bible is a holy text that contains prophetic knowledge about the future and dictates ideal normative behavior. In any case, the Bible and the multitudes of authoritative interpretations based on its messages have provided Jews with meaning and a sense of community for two millennia. Indeed, it was our success in building a religion, a culture and societal norms around a text that explains the Jewish people’s ability to survive exile and persecution for nearly two millennia and succeed, after nearly being destroyed, in returning to our ancestral homeland, as was promised by nearly every prophet in the Bible. The Bible’s legacy is important not just for the Jews, but for all religions and cultures that grew out of, or were influenced by, it, and perhaps even for all of humanity.That is why a study based on shards of pottery dating back more than two-and-a-half millennia still generates interests around the world. The fact that the same people who maintained a fort in Arad circa 600 BCE has returned to Arad to discover its history using the most advanced scientific methods only adds to the wonder.