In recent days, the situation has been deteriorating rapidly and seems to be on the verge of spinning out of control. 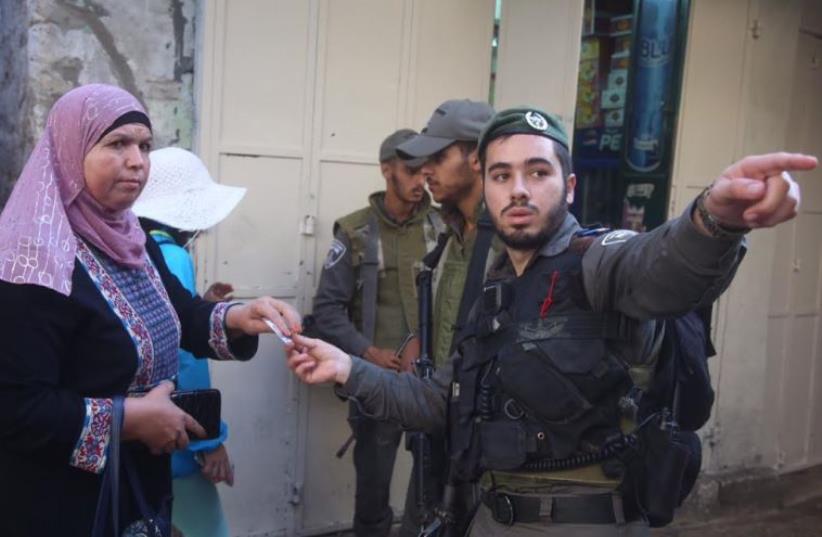 Border Policeman checks the ID of a Muslim woman seeking entrance into the Old City of Jerusalem
(photo credit: MARC ISRAEL SELLEM)
Advertisement
For months now, a tense modus vivendi was maintained in relations between Palestinians and Israelis.But in recent days, the situation has been deteriorating rapidly and seems to be on the verge of spinning out of control.Prime Minister Benjamin Netanyahu and Palestinian Authority President Mahmoud Abbas both have a moral obligation to their respective people to do everything in their power to put an end to the cycle of violence before we reach the point of no return.Netanyahu convened a special cabinet meeting on Monday night to discuss Israel’s response to the wave of terrorism. It is imperative, at the same time, that leaders on both sides resume a constructive dialogue on security cooperation and the resumption of direct peace negotiations.In the space of just a few days, Palestinian terrorists have carried out a series of abominable attacks that have killed innocent Israelis.On Thursday, the nation was horrified by the despicable murder of Eitam and Naama Henkin.The couple was driving back from a class reunion. As they passed the Palestinian village of Beit Furik, gunmen affiliated with Fatah – the party president Abbas heads – approached and shot them at close range. In the back of their white Subaru station wagon, four of their six children – the oldest one nine, the youngest four months – had been dozing off. Miraculously, they survived.Two days later, Mohannad Shafiq Halabi, 19, a member of Islamic Jihad from a village near Ramallah, knifed to death Aharon Banita, 22, and Nehemia Lavi, 41. Before he was shot by police, Halabi managed to seriously wound Banita’s wife and lightly wound the couple’s two-year-old baby. Islamic Jihad claimed responsibility.These murders, which reflect the brutality and the searing hatred of the perpetrators, are just the latest in a spate of terrorist attacks against Israelis.Understandably, Israelis are fed up and are demanding that the government use greater force to reinstate order. An overly violent reaction on our part, however, is unlikely to bring quiet. It would more likely lead to more violence on the Palestinian side, and stronger counter-reactions from the security forces. A new cycle of violence would ensue, with more victims on both sides.The crisis is being managed according to an all-too familiar dynamic. Government ministers are vying with one another to show their political constituents they are the toughest against Palestinian terrorism.Netanyahu, en route to Israel from the UN General Assembly in New York, is already talking about “a pointed attack against Islamic Palestinian terror.”Transportation Minister Israel Katz is calling to blockade Arab neighborhoods in Jerusalem and has hinted that the armed forces might conduct a major military operation in Judea and Samaria. Bayit Yehudi chairman Naftali Bennett is demanding implementation of a package of measures such as building new settlements and empowering the IDF with greater operational freedom.Though nothing justifies terrorism, we Israelis must be ready to acknowledge that Palestinians have legitimate fears and needs. Admittedly, a worryingly high percentage of Palestinians justify the use of indiscriminate violence against Israelis, particularly those Israelis who live in Judea and Samaria.At the same time, many Palestinians simply want to live their lives in peace, but are genuinely concerned about their future and the future of their children. Collective punishment is not the answer.Only through dialogue on the highest political level between the Abbas and Netanyahu governments can these fears and needs be aired and addressed. It is not too late to prevent the situation from spiraling into a third intifada. Before we jump to rash decisions about the use of military force, leaders from both sides should enter into a constructive dialogue.Israelis and Palestinians are destined to live with one another. Shouldn’t we – and they – at least make an honest attempt to restore a modicum of mutual respect and acknowledgment of the other side’s humanity? Let’s talk before it really is too late.