As Israel marks the 10th anniversary of the Second Lebanon War, we must remain vigilant in the face of developments on the northern border. 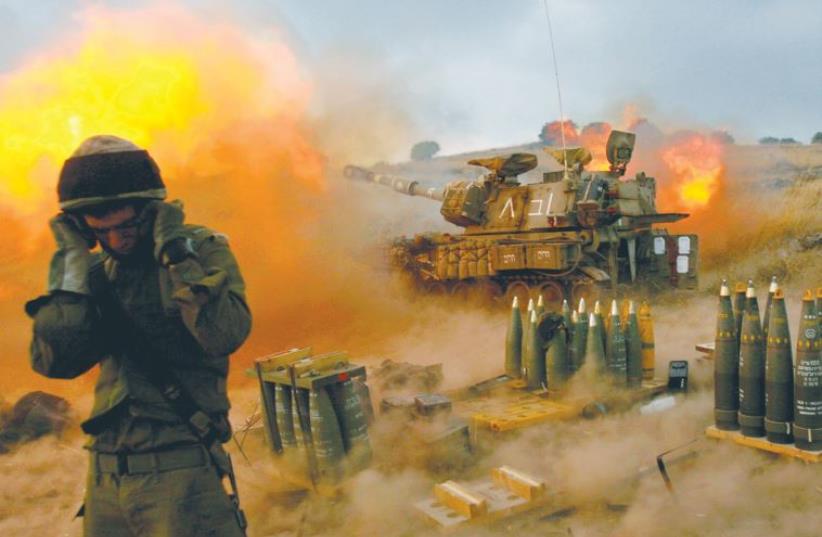 AN ISRAELI soldier stands near a mobile artillery unit as it fires a shell into southern Lebanon on July 13, 2006, a day after IDF reservists Ehud Goldwasser and Eldad Regev were abducted by Hezbollah
(photo credit: REUTERS)
Advertisement
On July 12, 2006, Hezbollah terrorists attacked an IDF patrol on the Israeli side of the border and abducted two reservists. Prime minister Ehud Olmert, defense minister Amir Peretz and IDF chief of staff Lt.-Gen. Dan Halutz ordered a forceful reaction, which in retrospect marked the start of the Second Lebanon War.It is clear today that Israel’s political and military leadership committed serious strategic errors. Declarations of victory rang hollow. The inquiry committee headed by judge Eliyahu Winograd – set up just three weeks after the end of the conflict – revealed errors in preparation for, execution of, and the ending of the 2006 Lebanon campaign.Still, the IDF has proved it can learn from its mistakes and improve, as befits the military of a healthy democracy that derives its strength from its ability for self-criticism.And despite all the strategic mistakes made before, during and after the Second Lebanon War, the Israeli tendency for hypercriticism and self-flagellation is misguided.The war demonstrated that Israel is a strong country. It has the spirit to fight. Its soldiers won each encounter with Hezbollah. The home front displayed great resilience, and the economy continued to thrive as up to 130 rockets and missiles a day fell on civilians in the North.What has changed over the past decade? Clearly, Hezbollah is much stronger today than it was in 2006. It is no longer a terrorist organization, but an entity with a full-fledged army complete with a command hierarchy and fire power that outstrips most states and openly dominates Lebanon’s political leadership.If 10 years ago Syria projected its power on its weaker neighbor, today the situation is reversed and Hezbollah formations are crucial to Bashar Assad’s ability to survive.Hezbollah is said to maintain an army of between 40,000 to 45,000 soldiers divided evenly between conscripts and reservists. It is said to be armed with some 120,000 surface- to-surface rockets and missiles. It possesses drones that it uses in combat in Syria. The combat experience it has gained and the technologies it has obtained from Russia and Iran make Hezbollah a more formidable opponent.At the same time, Hezbollah’s involvement in Syria reduces the chances that it will open a new front with Israel. It has lost more than 1,300 fighters in Syria, and suffered some 5,500 wounded, placing the southern Lebanese Shi’ite community, from where it recruits, under great strain. The “normalization” of Hezbollah – the party controls a third of the parliament in Beirut – makes it more accountable, and vulnerable, than it was in 2006. As The Jerusalem Post’s Military Correspondent Yaakov Lappin wrote recently, “Any future disastrous military adventure could drag in Israel, and leave Lebanon in ruins. That would also leave Hezbollah’s legitimacy as ‘Lebanon’s protector’ in tatters.” And such a development, said Lappin, “would topple the crutch of Hezbollah that the Assad regime and Iran lean on in Syria, and would have regional implications for the Sunni-Shi’ite war raging across the entire Middle East.”Nor is Israel in the same place it was a decade ago.Israel has developed three anti-missile systems: the Arrow which can take out long-range missiles, such as Scud missiles from Syria or Shihab missiles from Iran; Iron Dome, which stops short-range rockets such as Kassams and Katyushas; and David’s Sling, designed to intercept medium-range ballistic weapons, especially highly accurate missiles and large rockets such as Hezbollah’s M-600.More bomb shelters have been built in the North and Rambam Medical Center in Haifa now has 2,000 hospital beds located underground in case of aerial attack.One worry that has not yet been resolved is the need to speed up the move of the ammonia production facility from Haifa Bay to the Mishor Rotem Industrial Zone in the Negev. A University of Haifa study found that even if a fifth of the content of Haifa Chemicals’ facility were released as the result of a hit by a Hezbollah rocket, it could kill 15,000 to 17,000 people. The four-year-old government decision to move the plant should implemented quickly.As Israel marks the 10th anniversary of the Second Lebanon War, we must remain vigilant in the face of developments on the northern border.We should also remember the bravery exhibited by our soldiers and our citizens in the North who suddenly found themselves on the front line. Israeli society is resilient and Israel’s democratic leadership learns from its mistakes. Hezbollah would be ill advised to test us.