JPost Editorial: The US and Jerusalem

Israel and the US are close allies with shared values. It is therefore all the more disappointing that the US administration has refused to accept Israel’s position on building in part of Jerusalem. 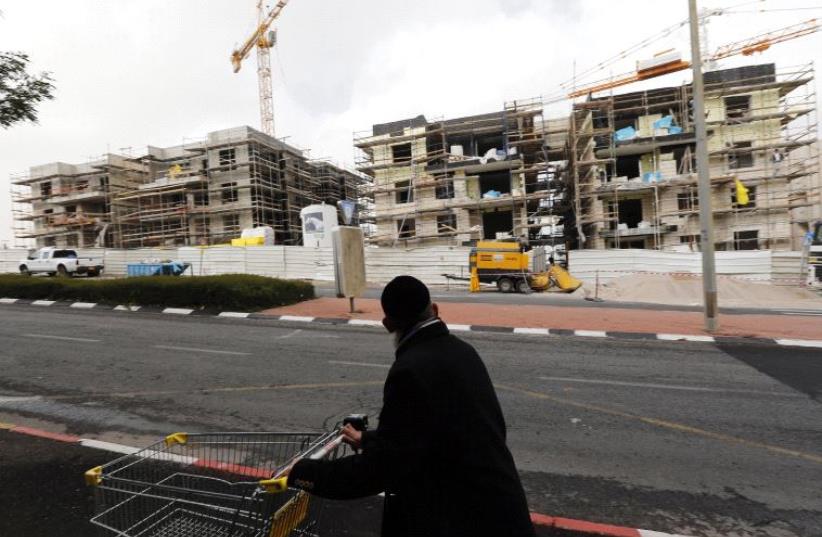 An ultra-Orthodox Jewish man pushes a shopping cart past a construction site in Gilo, in December 2012
(photo credit: REUTERS)
Advertisement
Why did the Jerusalem Municipality this week abruptly postpone meetings to approve the expansions of Jewish neighborhoods? At least two projects were slated to be moved forward this week. One is the allocation of 1.6 acres of land in Ramot for the construction of a new school to relieve overcrowding. The other is the construction of 770 apartments in Gilo.But meetings to discuss the implementation of these two projects were suddenly postponed.The reason was purely diplomatic. Prime Minister Benjamin Netanyahu did not want reports of building projects in areas that came under Israeli control during the Six Day War to dampen what will likely be his last meeting with Barack Obama as US president.Meir Turgeman, the chairman of Jerusalem’s Construction and Planning Committee, told Army Radio that the diplomatic delicacy generated by the meeting between Obama and Netanyahu mitigated against moving forward with the projects at this time.Though there is a nearly wall-to-wall consensus within Israel that in any conceivable two-state arrangement, Jewish neighborhoods built after June 1967 will remain part of the Jewish state, in the international community – even in America, Israel’s closest and most important ally – no distinction is made between Jerusalem and settlements in Judea and Samaria. Any and all territories that were not under Israeli control prior to the war instigated by Egypt are considered to be occupied territories. Building there is seen as a provocation and an obstacle to peace.For instance, in July, the US State Department, the EU and the UN criticized Israel for building in areas of Jerusalem that are not recognized as Israeli by the international community. State Department spokesman John Kirby said at the time that the US remains “troubled that Israel continues this pattern of provocative and counterproductive action, which raises serious questions about Israel’s ultimate commitment to a peaceful, negotiated settlement with the Palestinians.”The prime minister was right to be concerned about news reports of projects in Gilo and Ramot that coincided with his meeting with Obama. From a diplomatic point of view he was right to have these meetings postponed.Netanyahu undoubtedly recalls how back in March 2010, when Obama was just 14 months into his presidency, reports of building in the capital’s Ramat Shlomo neighborhood generated a major diplomatic crisis.Vice President Joe Biden had arrived in Israel and vowed unyielding American support for Israel’s security. Hours later, the Interior Ministry announced plans for the construction of 1,600 housing units in Ramat Shlomo, an ultra-Orthodox neighborhood not far from Ramot. Biden condemned the move as “precisely the kind of step that undermines the trust we need right now.”Then-secretary of state Hillary Clinton lectured Netanyahu in a phone conversation that last 45 minutes and made three demands: reverse the decision to add homes in Ramat Shlomo, make a substantive gesture to the Palestinians, such as releasing security prisoners, and agree to peace talks that encompass not only borders but also final-status issues such as refugees and Jerusalem.It is understandable why the Jerusalem Municipality postponed the meetings regarding Gilo and Ramot. Why create needless tension with the US precisely at a time when Netanyahu and Obama are meeting? It is unfortunate that leaders from the two countries see matters so differently. We would have thought that Obama and other American leaders such as presidential hopeful Clinton would have come by now to appreciate the distinction Israelis regularly make between neighborhoods in Jerusalem, which are an integral part of the State of Israel, and settlements in the West Bank.We would have also expected the US administration to understand that building in Jerusalem, Israel’s capital, is not the obstacle to peace – rather the real obstacle is the persistent Palestinian refusal to recognize a Jewish state in any borders.Israel and the US are close allies with shared values. It is therefore all the more disappointing that the US administration has refused to accept Israel’s position on building in part of Jerusalem such as Gilo and Ramot.