The yeshiva is an ideological gift that keeps on giving. 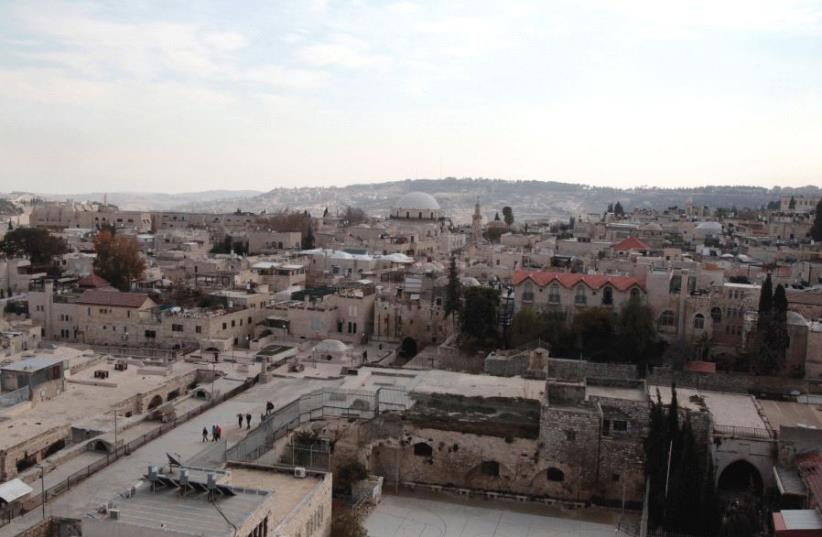 A VIEW of the Jewish Quarter in Jerusalem’s Old City.
(photo credit: REUTERS)
Advertisement
Over the next three months, there will be many jubilee celebrations of Jerusalem’s unification. Everyone will be marking 50 years since the liberation of the Old City and the return of Jewish sovereignty to the Temple Mount and the Kotel (Western Wall).It is only appropriate that the first of these celebrations was held by Yeshivat Hakotel, which was the very first major institution to be established in the Jewish Quarter of the Old City of Jerusalem immediately after the Six Day War. Close to 2,500 alumni of this magnificent educational institution (including me) gathered this week for a gala reunion and concert in Jerusalem. All the heroism, humanism, determination and vision that characterizes the rebuilding of Jerusalem and the re-anchoring of Jewish identity in Jerusalem over the past half-century is encapsulated in the story of Yeshivat Hakotel.It was only two months after the June 1967 war. The Jewish Quarter of the Old City of Jerusalem had been laid waste by the Arabs during the 19-year Jordanian occupation. It was in total ruins. Almost every building, including many famous synagogues, had been dynamited. Fox and sheep were the only residents of the rubble.Into the debris, waded the visionary Rabbi Aryeh Bina and a coterie of yeshiva students, intent on bringing Torah study back to the Temple precinct. The pioneering group schlepped food, books and electrical generators into the derelict Batei Machse buildings and established a hesder yeshiva – combining yeshiva studies with IDF service.The first classes were held on Tisha Be’Av, the day of lamentation for the destruction of the First and Second Jewish Commonwealths. It was more than symbolic that on this day the Third Jewish Commonwealth’s Religious Zionist frontiersmen trail-blazed their way back into ancient Jerusalem.Levi Eshkol and Yigal Alon were drawn to the yeshiva and helped it along, admiring its unique combination of grit, faith and revolutionary spirit. Great philanthropists like Kurt Rothschild of Canada and Maurice Wohl of England later helped build the yeshiva’s colossal building; the grandest structure in the Old City since the destruction of the Second Temple 2,000 years ago.Over the past fifty years, under the deanship of Rabbi Chaim Yeshayahu Hadari, and in recent years under Rabbi Baruch Wieder, Yeshivat Hakotel has grown into a powerhouse place of scholarship and leadership training. Its alumni can be found in all walks of Israeli leadership, from the yeshiva world to academia, and from business to military. Hakotel’s foreign student alumni are leaders of American Modern Orthodoxy too. Many have made aliyah, while others are key donors to the yeshiva today.Many prominent yeshivas, rabbinical courts and academic institutions are today led by Hakotel alumni. This includes well-known rabbis such as Avraham Wolfson (Maaleh Adumim), Aryeh Hendler (Ramle), Beni Kalmanzon (Otniel), David Henschke (Bar-Ilan U.), David Turgeman (Dimona), Dov Singer (Kfar Etzion), Haim Sabato (Mitpe Nevo), Rafi Peretz (former IDF chief rabbi), Tuvia Lifshitz (Hakotel), Yehuda Brandes (Herzog College), Yehuda Shachor (Rehovot), Yitzhak Levy (former NRP leader), and more.Rabbi Hadari’s unique personality and spiritual worldview is what drew these people together, I believe. He was questing for “Cossacks with shtreimels,” as he once picturesquely described it. Rabbi Hadari meant that he was seeking to raise a generation of soldiers who were also scholars deeply entrenched in Jewish learning; specifically Torah flavored by Hassidic thought infused with Rabbi A.Y. Kook’s Zionist-transformational bent.For me, a defining educational-sacred experience was the before-dawn Friday morning Midrash class taught by Rabbi Hadari in the early 1980s on the yeshiva rooftop overlooking the Temple Mount. It was here that I discovered how to understand the grand sweep of Jewish history as interpreted in traditional sources, and to appreciate the mystical teachings of Rav Zadok Hacohen of Lublin and their existentialist application to modern Israel. It was on that rooftop that I forged my own commitment to aliyah, and to the building of Jerusalem as Israel’s strategic, spiritual and cultural core.It was on that rooftop that I met the scholar-student activist-doctor who is my best friend from then till today.To this, I add the Friday night ritual of dancing en masse to the Kotel for Shabbat eve prayers – for which Yeshivat Hakotel was famous. It was sight to see and an experience to savor: Hundreds of white-shirted boys in rows, with arms on each other’s shoulders, streaming down the long staircase from the Jewish Quarter; like an endless flock of pure sheep skipping along the Psalmist’s mountains. Tourist groups from around the world, and many IDF units, would time their visits to the Western Wall in order to join in the singing and dancing (and take pictures). They still do. It is uplifting to all.At the majestic Yeshivat Hakotel alumni reunion this week, Hassidic rock star Avraham Fried led the audience in singing “Yismechu be-malchutcha shomrei Shabbat” (a Shabbat song of rejoicing in G-d’s kingdom), in the Gur Hassidic tune that Rabbi Hadari loved and that he insisted be sung on the Friday night march down to the Kotel, for the past 50 years.There also was a poignant memorial service for the yeshiva alumni who fell in battle (most in the 1973 and 1982 wars) – including my classmate and friend Yair Landau, of blessed memory.Underneath the vast yeshiva building lie the most incredible archeological finds, which are today open to the public as a national heritage site. (The digging delayed construction of the yeshiva building for a decade). This includes the mosaic-adorned villas of wealthy Jerusalemites who lived in the “upper city” in Herodian times. Almost every home had at least one mikveh (ritual bath), attesting to the piety of residents. It’s a luminous foundation for the devotional intellectual institution now built above.I have been back to the yeshiva for Yom Kippur prayer services almost every year for the past 25 years, and next year my youngest son will be a student there too. The yeshiva is an ideological gift that keeps on giving.www.davidmweinberg.com