He ostentatiously believes in the potency of his own whimsical, wayward worldview, despite a global security collapse 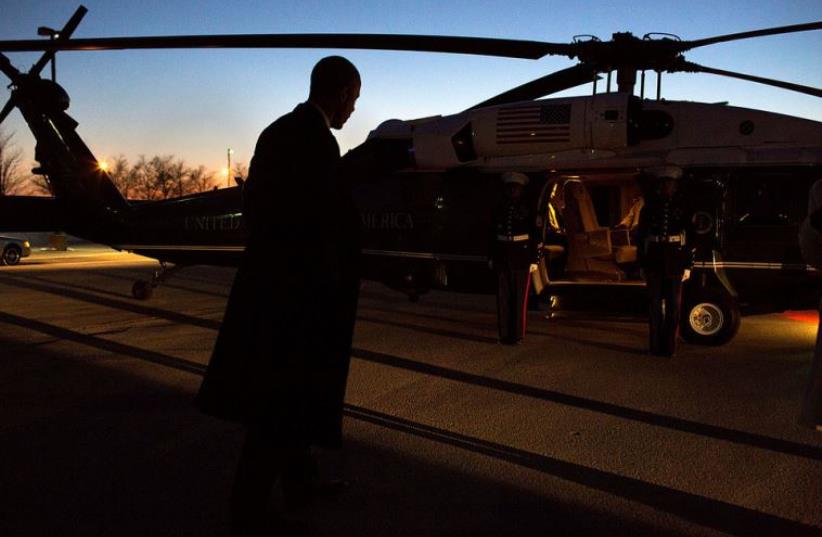 President Barack Obama boards Marine One at the Hope landing zone for departure en route to Chicago O'Hare International Airport
(photo credit: OFFICIAL WHITE HOUSE PHOTO / PETE SOUZA)
Advertisement
Barack Obama sung his swan song this week at the United Nations. He seemed baffled by the stubborn refusal of the world to reform itself in his image and on his say so.How can there still be “deep fault lines in the international order,” Obama wondered aloud, with “societies filled with uncertainty, and unease, and strife? Hasn’t his very identity as a man “made up of the flesh and blood and traditions and cultures and faiths from a lot of different parts of the world” served as shining and irresistible example of blended global peace? How can it be that, after eight years of his visionary leadership, peoples everywhere aren’t marching to the tune of Obama’s self-declared superior “moral imagination”? It is indeed, a “paradox,” Obama declared.In his preachy, philosophical and snooty address to the General Assembly on Wednesday, Obama expressed deep disappointment with the world. Alas, peoples and nations, it seems, are just not sophisticated enough to comprehend his sage sermonizing; smart enough to follow his enlightened example; or deep enough to understand his perfect policies.Why oh why does the world not snap to order as he imperiously wills it, nor any longer drool in his presence? The answer to these questions are embedded in the one main thing missing from Obama’s UN address; indeed from his entire presidency: a willingness to project power.From day one, Obama has made it clear that he rejects the traditional and time-tested hard power tools of statecraft. He abjures the use of military force and other forms of raw American power. He is willing to “speak out forcefully” – how courageous and decisive of him! – but that’s it.And of course, Obama is ashamed of America’s “overbearing” record of decisive global leadership in the past. Even in this final UN speech, he was apologizing for American mega-wealth, “soulless capitalism,” “unaccountable mercantilist policies,” insufficient foreign assistance, and “strongman” pushing of its liberal democratic preferences.This leaves America shorn of its ability to actually shape the world in the fine directions that Obama desires. All that is left is Obama’s exhortations for brotherhood in his image, declarations which flow so naturally from his deeply narcissistic soul.In fact, the words “enemy, “threat” and “adversary” do not appear even once in Obama’s 5,600-word address. They are not part of his lexicon, nor are concepts like “victory” for the West or “beating” the bad guys. He won’t even names foes, like “radical Islam” or “Islamist terror.”Again, all this high-minded intellectualizing, self-doubt and equivocation leave the US with little ability to actually drive toward a more ordered world and provide a modicum of global security.Instead, we have only Obama’s “belief” that Russia’s imperial moves in the Ukraine and Syria, China’s power grabs in Asia, Iran’s hegemonic troublemaking in the Mideast (and by inference, Israel’s settlement policies in Judea and Samaria) will “ultimately backfire.”Yes, Obama has many such unsubstantiated and illusory “beliefs.” And it is very important for Obama to tell us what he “believes.” He does so 33 times (“I believe”!) in the one speech. Clearly, he believes in the overwhelming potency of his own beliefs, despite the global security collapse. In fact, the UN speech reads like chapter one of the expected Obama memoirs, which surely will be filled with more inane “beliefs” and other ostentation.In the meantime, Obama has about 100 days left to act on his beliefs. At the moment, these beliefs are being expressed, it seems, mainly through repeated cash transfers of billions of dollars to the Islamic Republic of Iran.According to testimony given this week to the US Senate Subcommittee on National Security and International Trade and Finance by former under secretary of defense Prof. Eric Edelman, Iran may have received from the $33.6 billion in cash over the past two years; not just $1.3b. that was flown to Tehran in January and February of this year.Based on research by the Foundation for Defense of Democracies, by Claudia Rosett of the Independent Women’s Forum, and by JINSA’s Gemunder Center Iran Task Force, Edelman noted that Iran has no incentive to discontinue the dangerous behavior that ultimately led to it being paid in the first place.“Sadly, therefore, it was only half-jokingly that a reporter asked the State Department spokesman last month whether the United States still owed Iran 13 cents in interest and was it holding onto the small change for leverage. Due to the administration’s actions, that may be the only leverage the Obama administration has left.”It therefore falls to Congress and the next president to redirect US policy; policy one hopes based less on whimsical, wayward beliefs, and more on hard-nosed, forceful reassertion of Western interests.www.davidmweinberg.com