Lebanon is struggling to maintain its independence from the cancerous growth of Hezbollah at the same time it is host to the largest concentration of Syrian refugees per capita. 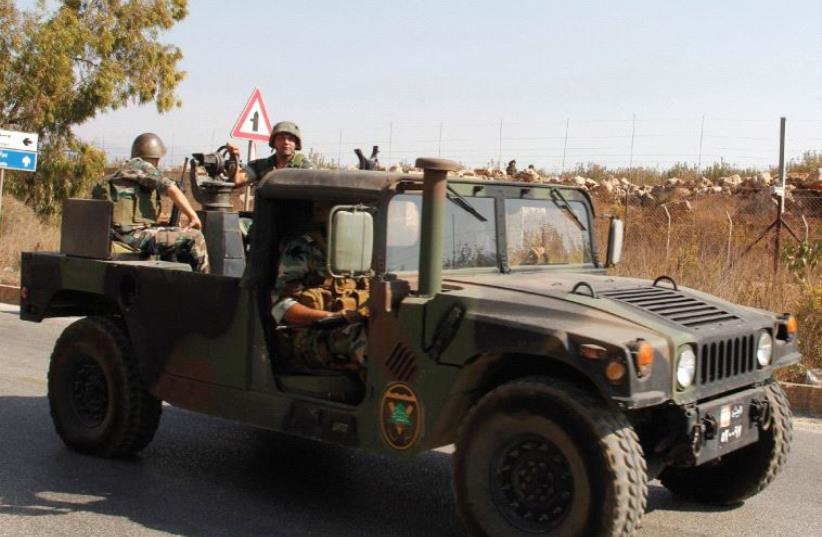 LEBANESE SOLDIERS drive near the border with Israel in Kafr Kila, in October. Israel has used its ability to operate in the skies over Syria to prevent weapons transfers to Hezbollah in Lebanon from the Syrian regime.
(photo credit: REUTERS)
Advertisement
As the fighting in Syria continues to rage with the help of Iran’s Hezbollah proxy, Lebanon’s government has recently begun asserting itself against the virtual takeover of its border area opposite Israel by the terrorist organization.Meanwhile, Israel continues to fortify the northern border against the kind of Hezbollah infiltration that led to the 2006 war, and recently held a massive civil defense exercise in the North. Israel reportedly continues to strike Hezbollah weapons convoys in Syria to prevent it from acquiring advanced missiles to add to its arsenal of more than 100,000 missiles poised to strike Israel.In the midst of these warlike rumblings, Lebanese Prime Minister Saad Hariri urged the UN to help negotiate a permanent cease-fire between Hezbollah and Israel. The timing of his request was notable: He made it during a visit to southern Lebanon just a day after Hezbollah guerrillas staged a “media tour” of what they referred to as “Israeli border fortifications” and warned the world that Hezbollah is prepared to go to war again.Liberating Lebanon from the domination of Hezbollah and Syria was the goal of Saad’s father, former prime minister Rafik Hariri, who was assassinated in February 2005 reportedly by Hezbollah on orders from Syria.Under Security Council Resolution 1701 that ended the 2006 war, Hezbollah is banned from activity along the border area, while the Lebanese and Israeli militaries are responsible for patrolling it on their respective sides. Hezbollah has spent the time since then building an arsenal more powerful than the Lebanese Army.More seriously, the terrorist organization deploys this arsenal throughout the border region by storing it in villages, deliberately using Lebanese civilians as human shields to deter Israeli attack. Two civilian populations are thus being held hostage by Hezbollah under the possibility of future hostilities: Lebanese villagers and Israel’s northern population.Lebanon is struggling to maintain its independence from the cancerous growth of Hezbollah at the same time it is host to the largest concentration of Syrian refugees per capita. Out of a total population of some four million, Lebanon has taken in more than a million refugees, adding them to the volatile refugee camps occupied by Palestinians.In addition to changes in the IDF’s defensive doctrine, the Hezbollah takeover of southern Lebanon has led to a reassessment of Israel’s offensive capabilities against a terrorist enemy embedded within a civilian population. Hints are emerging that, in a future conflict with Hezbollah, the IDF might be forced to retaliate against Lebanon’s infrastructure for the first time.A sign of this possibility came to light earlier this week, in a rare statement by IDF Military Advocate-General Brig.-Gen. Sharon Afek at a conference for fellow military jurists. Afek said he would approve more targets than were approved in the 2006 Second Lebanon War in the event of a new conflict with Hezbollah.“Hezbollah’s location of its military assets in dense urban areas raises questions about how to implement the principle of proportionality,” Afek remarked, adding that asymmetrical warfare between the terrorist group and the IDF “creates operational and strategic challenges by the fact that they directly target civilian populations, act in urban environments and make ground operations necessary in order to locate their military assets.”Meanwhile, the Lebanese Army has moved against infiltration by Islamic State terrorists, this week conducting in a dawn raid that killed an ISIS leader and arrested 10 terrorists who had crossed into a northeastern border village from Syria. The army regularly targets ISIS and al-Qaida affiliates in the mountainous region, which still hold nine Lebanese soldiers captive.Another sign of Lebanese distancing from Hezbollah came last week from Samir Geagea, leader of the Lebanese Forces Christian political party. He was quoted by Lebanese media as slamming the Shi’ite group’s media tour for giving the “impression that there is no official Lebanese Army that is responsible for the border and that there is no state.”How this plays out remains to be seen but it would be in Israel’s interest for the Lebanese government to finally take control of its country. That could be an important step in preventing the Third Lebanon War.