Letters to the Editor: Readers weigh in on recent ruckus at Kotel

By LETTERS TO THE EDITOR 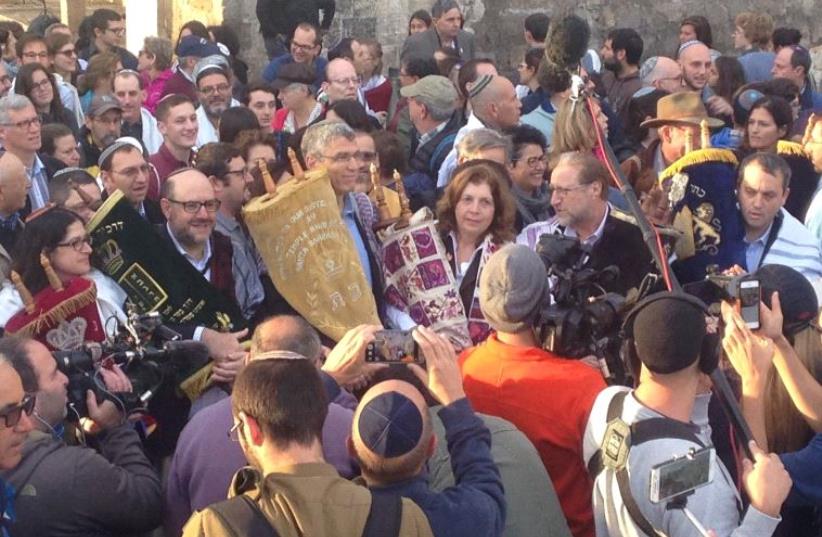 Progressive Jewish leaders begin procession with Torah scrolls to Western Wall entrance
(photo credit: JEREMY SHARON)
Advertisement
With regard to “Haredi men, protesters harass Women of the Wall” (February 28), I wish to express my sadness at the sight of 1,000 religious girls being used as propaganda against the Women at the Wall. I had to look twice to make sure I was not seeing a demonstration organized by ISIS.The worst thing for me is the distortion of the word “religious.” Are not the Women of the Wall religious, too? I will make a prediction: Of those 1,000 girls, 50% will toe the line, 25% will question and make changes, 25% will leave the community – and one of those will be a rabbi.RENEE BRAVO
Aseret/London I keep reading articles about how the Palestinians educate their children to hate, and about the criticism by Israel that Europeans are paying for such incitement.What about the haredi education system? The haredim don’t teach their children to hate only Arabs – they teach them to hate any Jews who are not like themselves. Sounds to me like the Jewish version of ISIS. On top of that, we are funding these schools.I hope the funding will cease, at least for the girls who were bused to the Western Wall. They are being trained to grow up hating their fellow Jews, and we are stupidly paying for it.The Women of the Wall should maybe kiss and hug those haredi men who push them. That should either scare them off or make their day. How dare they touch “dirty” women?GERALDINE THEMAL
Kiryat TivonI was surprised to read that there was a “significant presence of national-religious high-school girls who had been brought to the Western Wall as a form of protest by hard-line national-religious organizations against Women of the Wall.”I am not aware of any such organizations, and it certainly does not tally with the distressing scene that met my eyes that day when I joined members of Emunah, a well known organization of religious Zionist women, for our regular Rosh Hodesh prayers at the Wall. As far as I could see, the women’s section was filled by scores, if not hundreds, of haredi girls, and not national-religious school girls.A large police and military contingent was also present.Prayer was out of the question. There were many tourists as well, and goodness knows what they thought.The sooner the government implements the plan conceived by Jewish Agency Chairman Nathan Sharansky, the better it will be, and these provocative scenes of gratuitous hatred from both sides can be avoided.

DONYA MEIJER
JerusalemRegarding “Sharansky to extend term to see Kotel deal through” (March 1), I am wondering where Benny Kashriel, mayor of Ma’aleh Adumim and World Likud’s candidate to succeed Natan Sharansky as Jewish Agency chairman, has been all these years. I never heard his name mentioned in the fight for Conservative and Reform Jews to have their own piece of the Western Wall.Let’s face it: As long as the haredim are the key to Prime Minister Benjamin Netanyahu staying in power, nothing will happen with access to the Kotel. I have suggested that the only way to make them listen is to ask Jewish federations to cut their contributions to the Jewish Agency, and then to cut their contributions to haredim. Oh well, another year with Sharansky.Reporter Tamara Zieve probably knows the answer to this question: Can a non-Israeli chair the Jewish Agency Executive? I know that numerous Americans have chaired the Board of Governors. Hopefully, a real American leader will arise who can be chosen as chairman.DAVID GEFFEN
JerusalemTamara Zieve responds: According to the Jewish Agency constitution, the chair of the Executive must be Israeli, and the chair of the Board of Governors must be from the Diaspora.
Advertisement
Subscribe for our daily newsletter