President Peres is the proper person to make the plea for Pollard, as he represents the collective nonpolitical will of the people. 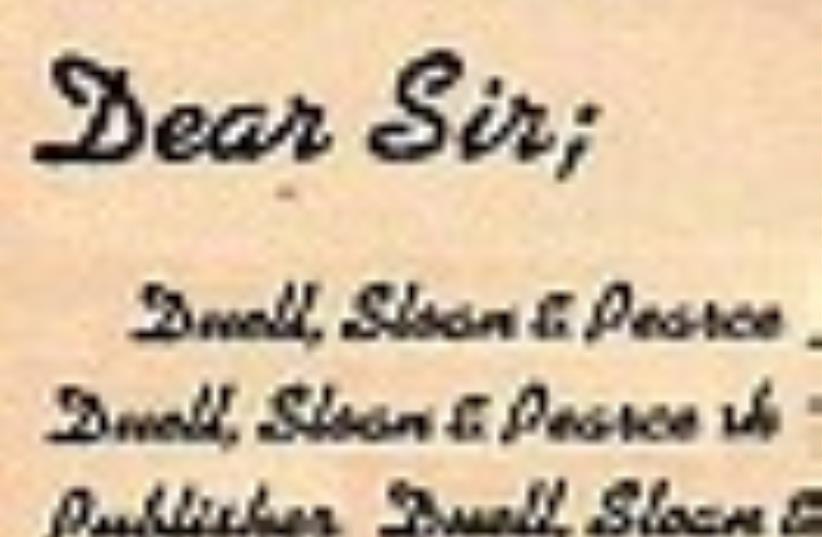 letters 88
(photo credit: Courtesy)
Advertisement
Where’s Peres? Sir, – Regarding “Rep. Frank to ‘Post’: Free Pollard to push peace” (December 23), there is a voice that has yet to be heard regarding Jonathan Pollard’s release. That voice belongs to President Shimon Peres, who has great international standing. It would be very helpful to the cause if he were to send a public message aimed at US President Barack Obama.As one president to another, it would be highly appropriate to express the feelings that exist in the hearts and minds of the people of Israel – feelings that should find a resounding echo.President Peres is the proper person to make the plea for Pollard, as he represents the collective nonpolitical will of the people.TOBY WILLIG
Jerusalem Sir, – Jonathan Pollard was given his unusually harsh sentence because of a request by then-secretary of defense Caspar Weinberger, who accused Pollard of having transmitted vital secrets to the USSR. The accusation was later proved wrong.Spies who transferred secret information to America’s enemies have received much lighter sentences.Weinberger had a visceral hatred for Israel. He is long gone, but the harm he did lives on.ELIEZER WHARTMAN
Jerusalem Did not, did too! Sir, – The item headlined “PA, Hamas warn Israel against response to firing of rockets” (December 23) really epitomizes the absolute chutzpah of the Palestinian Arabs in this war of attrition. According to PA President Mahmoud Abbas – our “oh so moderate peace partner” – any new Israeli aggression would endanger the peace process. What cheek! Do the Arabs really expect us to just take whatever they throw at us and sit meekly with our hands folded, waiting for the next catastrophe? What we should be doing is destroying all the tunnels we know about in one fell swoop, not one or two every few days. We also need to target more infrastructure without issuing warnings beforehand.Your headline could have instead read “They hit me back first,” a longtime children’s playground excuse.JUDY PRAGER
Petah Tikva Feed the kids Sir, – In “Growing numbers of kids forgo meals because of economic hardship, study shows” (December 22), Ruth Eglash reports that, based on data collected by 100 food aid charities, some 467,000 children in Israel forgo a nutritious meal every day. In addition, poor children are forced to steal or pick up food from the floor.This is not only unacceptable, but shocking. One must ask why this story was placed on Page 6 and not on Page 1? Certainly, this is far more important than improvements in the immigration service! And where is the media/public outcry for an investigation? Can we possibly allow children to go hungry while we spend billions elsewhere? Is everything a matter of political convenience and coalition considerations? The distance between a hungry child and a violent adult is very short.MATTIAS ROTENBERG
Petah Tikva Secular terminology Sir, – Your article “Ministerial panel votes to fund archeological sites in the West Bank and Golan Heights” (December 22) mentions the term “West Bank” no fewer than five times.The funds to preserve the sites are to be managed by the National Heritage Plan. Aren’t these heritage sites located, according to history, in Judea and Samaria? There was no “West Bank” at the time these sites were established.Why the constant mention of a term initiated by secularists? It’s time that the world gets used to the correct terminology for this precious and tradition-laden part of Israel.URI HIRSCH
Netanya Safe – and smart Sir, – While “Avi Cohen’s critical motorcycle injury might have been avoided with a legal helmet” (December 22) was positive in emphasizing the need for “integral” helmets, as required by law, your reporter does not address a more fundamental issue: the reckless abandon of the vast majority of motorcycle riders.Whether squeezing between cars, riding around cars via a median, riding on sidewalks or a whole series of other maneuvers, it is appalling the way they constantly endanger other vehicles. While wearing the proper helmet will indeed save lives, I submit that proper riding will also reduce the levels of stress and tension on the road.ZE’EV M. SHANDALOV
Ma’aleh Adumim Singing praise Sir, – It was indeed a pleasure to read the op-ed by Saul Singer (“Who’s being obstinate?,” Comment & Features, December 22).His clear elucidation of the reasons for the failure of American peace efforts should be addressed by Secretary of State Hillary Clinton and others, and they should realize the need to stop displaying their so-called even-handedness.Having missed Singer’s excellent articles for a long time, perhaps we can look forward to reading them again on a regular basis?

MONTY M. ZION
Tel Mond HRW and water Sir, – Human Rights Watch recently published a detailed report showing that Israel’s treatment of Palestinians in Area C of the West Bank and east Jerusalem, where Israel exercises total control over everything from the issuance of building permits to access to water, was systematically discriminatory in comparison with Israel’s treatment of neighboring settlers. Your December 21 editorial (“HRW critique that doesn’t hold water”) argued that the report was misguided because Palestinians in the West Bank are receiving more Israeli water than ever before.That claim is both misleading and beside the point. Discrimination can never be justified, even if the quality of life is improving, and for many Palestinians it is not.While Israeli settlements boast swimming pools and fountains, the UN estimates that up to 60,000 Palestinians living under full Israeli control lack access to running water and must pay up to onesixth of their income to buy water.According to the World Bank, Israel’s over-extraction of water has dried up Palestinian wells, which produce less water now than at the time of the Oslo Accords, while Israeli military orders prohibit Palestinians from drilling new ones.Palestinians must buy increasing quantities of water from Israel – much of which originates in the West Bank.The World Bank found that the water supply for Palestinians who are connected to the water system is “variable and discontinuous,” and of worsening quality; a quarter of the Palestinians with water connections receive less than 50 liters per day, and increasing numbers suffer from water-borne disease.In Area C, Israel routinely refuses to allow Palestinians to repair wells or even fix leaking water pipes.Readily granting such permission would be good for both Palestinians and Israelis. It is in no one’s interest to let 34 percent of the water flowing through these pipes go to waste.Your editorial also evaded the question of discrimination by contending that Palestinians in Area C have better access to fresh water than citizens of neighboring countries.In fact, the World Bank report you cited found that Jordanians, Lebanese and Syrians have access to more fresh water per capita than do Palestinians. In any event, such an argument reads as if one were to have tried to justify Jim Crow discrimination against blacks in the southern United States by claiming that African-Americans were better off than blacks in Africa.BILL VAN ESVELD
Jerusalem
The writer is a researcher for Human Rights Watch’s Middle East/North Africa division