During his speech on Sunday, Lew was adamant about the administration’s desire to prevent Iran from acquiring a nuclear weapon. 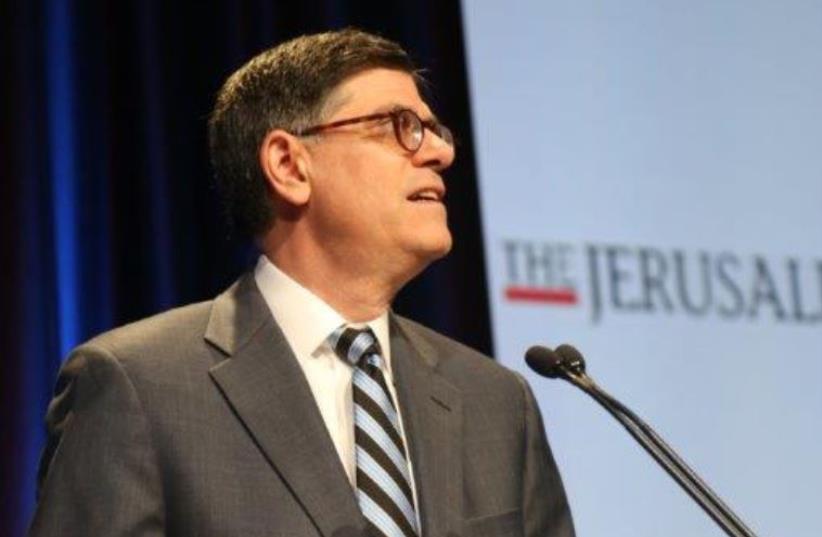 Jacob Lew
(photo credit: SIVAN FARAG)
Advertisement
National Infrastructure Minister Yuval Steinitz said it best on Sunday at The Jerusalem Post Annual Conference in New York City when he called US Treasury Secretary Jacob Lew a great friend of Israel.Lew received a mixed reception during his speech at the conference, with some members of the audience mistaking the divergent paths that the US and Israel would like to follow to prevent a nuclear Iran as representing something other than what they do, a divergence of opinion.They should be educated about the following facts. A veteran of almost four decades of government service, Lew began his work in Washington as an aide to House speaker Tip O’Neill in the 1980s and has often been outspoken in support of Israel. He served as US President Barack Obama’s chief of staff before being confirmed as Treasury secretary in February 2013. He was the first Orthodox Jewish White House chief of staff.In June 2014, Lew made his first trip to Israel in his current position. Speaking at a meeting of the US-Israel Joint Economic Development Group he said, “After a very difficult winter that hit productivity hard, we expect a better second quarter, and the most recent data we have received reinforce our optimism.”Meeting with then-finance minister Yair Lapid, he illustrated that the US was committed to the success of the Israeli economy. Speaking about the loan guarantees the US provides Israel, which had been renewed in 2012, Lew noted, “This is a sign of the strong ties and our deep commitment to the leadership.” He spoke out on Tehran, saying “Let there be no misunderstanding: Iran cannot attain nuclear arms.”Over the years, Lew has shown a special devotion to Jewish causes. In the 1980s, he worked with Natan Sharansky on securing freedom for Soviet Jews, and after the murders at the kosher market in Paris in January he met with French Jewish leaders to hear their concerns. He led the US delegation to ceremonies marking 70 years since the liberation of Auschwitz.Despite appearances of friction between Prime Minister Netanyahu and Obama, Lew has always asserted that the level of cooperation and coordination has never been better between the US and Israel. And Steinitz on Sunday recalled that without Lew’s help, Israel would never have been accepted to the OECD.Unfortunately some are unable to distinguish between a close friend of Israel and the temporary impasse over the Iran issue. The animosity and anger directed toward Lew by a minority of the conference audience reflected not only the passion raised by the issue, but the blindness and misguided hatred that rigid ideology can bring to the table.During his speech on Sunday, Lew was adamant about the administration’s desire to prevent Iran from acquiring a nuclear weapon.“Making sure Iran never gets a nuclear weapon is a national security priority of the highest order,” he said.“A nuclear-armed Iran would likely lead to a nuclear arms race in the Middle East; it would increase the potential for a nuclear war in the region; it would unlock opportunities for terrorists to get a nuclear weapon; and it would mean a nation whose leaders have openly called for wiping the State of Israel off the map, would have the means to make that threat a reality.” He clarified that any lifting of sanctions on Iran would be phased in nature and not all sanctions would be removed immediately.Lew outlined a multi-pronged policy on the issue. “Make no mistake, we are not operating on an assumption that Iran will act in good faith,” he told the audience. “In return for meeting the demands that have been put on it by the international community, Iran would obtain phased-in relief from nuclear-related sanctions. But, in the same way that we have structured inspections around the notion that Iran might try to cheat, we have approached winding down sanctions so we can police against the same risk.”The Treasury secretary reiterated that the US administration does not trust the Iranians, and that procedures will be put in place to reimpose sanctions if Tehran violates the current deal or does not allow access to ensure that it is adhering to the final agreement. “As history makes clear, we owe it to ourselves and we owe it to future generations to give diplomacy a chance... when given a chance, smart, tough, hard-fought diplomacy can succeed,” he said.

The Jerusalem Post thanks Jacob Lew for his attendance at this important conference and for his continued support of Israel in these trying times. He is, indeed, a true friend.