Malaysia, how about visas for Israelis? 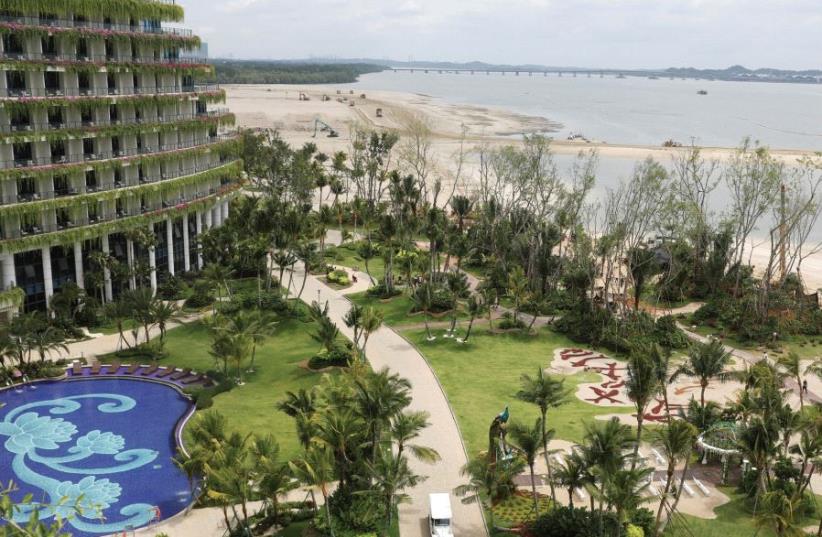 WHY CAN’T Israelis visit here? A newly built hotel in the Country Gardens’ Forest City development in Johor Bahru, Malaysia
(photo credit: REUTERS)
Advertisement
As demonstrated by the February 13 public murder of Kim Jong-nam, the estranged half brother of North Korea’s ruler Kim Jong-un, the regime in Pyongyang continues with its tradition of ordering killings of those who it views as a threat to its power. This hit job is part and parcel of the regime’s sponsoring of various crimes beyond its own shores over the years for purposes of raising hard currency and protecting its power.A few examples of this nefarious behavior are kidnappings of Japanese nationals during the 1970s and 1980s; the 1983 Rangoon bombing and attempted assassination of South Korean president Chun Doo-hwan; the production and sale of illegal drugs and imitation goods; human trafficking; arms proliferation; and counterfeiting currency.In light of this, Malaysia’s March 2 announcement of the scrapping of its visafree entry for North Korean nationals is a wise policy reversal and a step in the right direction toward public safety and security in the country.Yet, the recent fallout between Malaysia and North Korea over Kim Jong-nam’s murder ought to spur in Malaysia a reevaluation of its stance and policies toward Israel.Yes, Israel.For decades, Malaysia has forbidden Israeli passport holders from entering the country.While Malaysia is not alone in this ludicrous practice – 15 other countries follow the same policy – the recent dustup over Kim Jongnam’s assassination ought to put things in perspective for Malaysian authorities, and the country’s policymakers would be well advised to consider the following: For starters, Israeli nationals have never used Malaysian soil – or any soil in Southeast Asia, for that matter – for state-sponsored illicit activities, particularly the likes of what North Korea has been guilty of committing for years now.Second – and this is common knowledge, not exactly a news flash – for some time Israelis have made numerous contributions throughout the Asia Pacific region to the arts, sciences, medicine, business, high-tech industry and disaster response and recovery, among many other areas. This doesn’t smack of a clear and present danger to the legitimacy of the Malaysian government or to the well-being of Malaysian citizens.Third, Malaysia is clearly concerned about maintaining its “street cred” among the Saudis and elsewhere in the Middle East, and this is one reason for its hard line on Israel.Yet, granting visas to Israeli nationals does not have to be a highly publicized process.It can be done quietly and need not involve highly-scrutinized developments, such as the establishing of diplomatic relations. Look no further than Malaysia’s neighbor, Indonesia, to observe how a Muslim country can hold a quiet, respectful bilateral relationship with Israel – focusing on trade, security and tourism – while not holding formal diplomatic ties.Lastly, Malaysia’s longest-serving prime minister, Mahathir bin Mohamad, while unquestionably having served Malaysia well in terms of modernizing its economy and raising living standards, did great damage to relations with Israel and the Jewish people during his time in office from 1981-2003. Rabidly antisemitic, Mahathir never hesitated to propagate many of the typical canards against Jews.As examples, in 1986 Mahathir asserted that The Wall Street Journal was controlled by Jews and part of a Zionist plot to overthrow his regime, and in a 2003 speech urged Muslims to unite against Jews who, he argued, “rule the world by proxy. They get others to fight and die for them.”Not surprisingly, Mahathir’s many libels toward Jews provided justification and cover for the government’s anti-Israel policies, which still exist today. Sadly, Mahathir’s lies also made inroads into some sectors of Malaysian society, breeding hate against Israel and the Jewish people.Encouragingly, Mahathir’s vitriol never took root among the region’s other societies. While there are occasional obstacles, by and large Israel maintains diplomatic relations with most Asian states. Some of the more productive relations are with China, Japan, South Korea, Thailand, Singapore, the Philippines, India, Burma and Australia.So, Malaysia, why not get on board with so many of your peers in your own backyard and improve relations – albeit quietly – with Israel rather than maintaining dead-end relationships like that with the murderous North Korean regime? Your people and the world deserve a more humane, thoughtful and strategic foreign policy.Malaysia, it’s time to abandon outmoded thinking and intolerance. Break free from your absurd practice of marching in lock step with Middle East counterparts’ anti-Israel policies and, while you’re at it, dump Pyongyang.Try starting with baby steps. Quiet baby steps, like issuing visas to Israelis. We won’t tell anybody.The author is an instructor of political science at Central Texas College and at the US Marine Corps Base Camp Pendleton, California.