Why Temple Mount did what nothing else ever did to this fixture of postmodern life. 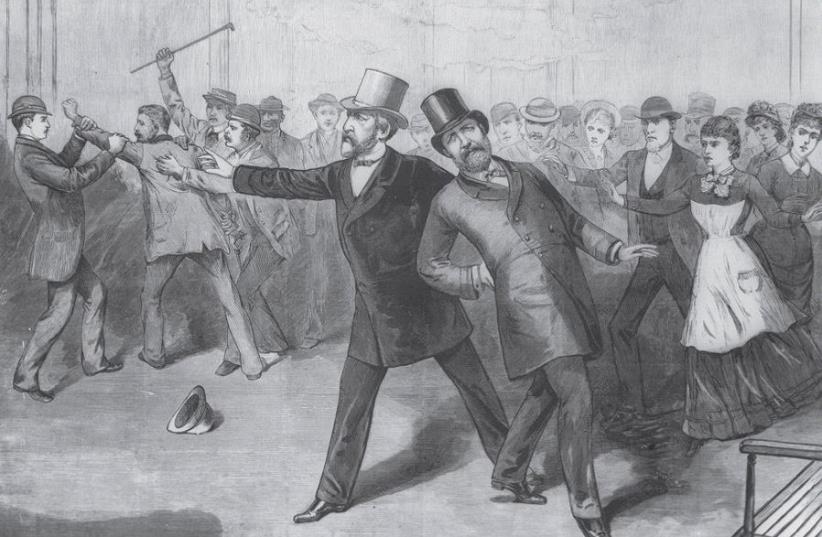 AN ENGRAVING of James A. Garfield’s assassination, published in 1881 in Frank Leslie’s Illustrated Newspaper.
(photo credit: Wikimedia Commons)
Advertisement
The metal detector started off as a finder not of bombs walking in human garb but of idle bullets in human chests.Crawling in 1881 along the dying James Garfield’s back, a device developed by Alexander Graham Bell failed in its assignment because it could not distinguish between metal springs in the slain president’s deathbed and the bullet that it was tasked with locating inside his body.The metal detector therefore failed to prevent the 20th American president’s death six months after he took office and 10 weeks after he was shot in a Baltimore train station by a lawyer he had refused to hire.Even so, the technology that had been invented the previous decade in France did find shrapnel in human bodies, and thus helped treat gunfire’s victims.It was the beginning of a beautiful relationship between a new technology’s interplay with magnetic fields and a human race’s interplay of industry, curiosity and madness.IN TERMS of industry, what was initially designed for handpicked targets like Garfield soon spread as far and as wide as World War I’s killing fields, as public safety demanded that mass-produced bombs, shells and land mines be detected and cleared.The detector was thus elevated from a responder to disaster to its preventer, as squadrons of sappers now carpeted hilltops, valleys and border fields in order to precede rather than follow metal’s deadly encounter with flesh.Reflecting its expanded task, the detector now swelled in size, mushrooming from a handheld bar to a towering compilation of rods, rings and axles that in some cases was taller than a human being.And having accomplished that in the aftermath of the Great War, the detector soon morphed from postwar cleaner to wartime combatant, as it helped armies run forth by plucking, under enemy fire, thousands of mines stranded between retreating Axis battalions and advancing Allied platoons.Meanwhile, after having done all this horizontally, the detector also found vertical purpose, when archeologists proved that the same device that can help produce a less bloody future can also help unearth a more intelligible past.The metal detector thus joined academia, plucking in 1958 bullets, buckles and arrowheads from under Montana’s grassy terrain so scholars could reconstruct the 1876 Battle of the Little Bighorn, where a coalition of Native American tribes dealt the US Army a fabled defeat.Obviously, like the one that crawled on Garfield’s torso, the detector’s academic deployment was of little relevance to the masses, as was even the discovery three years ago of 22,000 Roman coins in southwest England, thanks to a metal detector the size of a small unicycle.What did matter to the masses was the aftermath of the 1972 Southern Airways Flight 49 from Memphis to Miami, in which three hijackers threatened to ram a DC-9 jet and its 34 passengers and crew into the Oak Ridge nuclear reactor.That the hijackers’ demand – $10 million – evolved as the vessel took off, landed and refueled in multiple airports from Cuba to Canada is not the point as far as this week’s news is concerned, nor is the eight-year jail term they spent in Cuba before proceeding to an American jail for another 20-25 years.What matters to us is that, following this trauma, metal detectors became part of ordinary people’s daily lives.WHAT BEGAN with the US Federal Aviation Administration’s decree in 1973 that airport passengers and luggage go through metal detection has since become an emblem of the era in which we live.Following subsequent decades’ global plague of bombings, stabbings and machine-gun spraying of shoppers, passengers and pedestrians, all humans became roundly subjected to metal detection.In this country we are subjected to it not only in airports but also at the supermarket, the theater, the stadium and the mall, and even when wishing to pray at the Western Wall. Though we are still ahead of others in our usage of the detector, the rest of the world is fast catching up. In Shanghai the other month, I saw passenger after passenger pass their bags through a metal detector at the entrance to a regular subway station.The detector’s original grazing ground, the military minefield, has thus spread to practically any place where humans gather, as any human became suspected as a walking bomb.It was against this backdrop that, amid mayhem that shook royal palaces, presidential chambers and diplomatic corridors worldwide – the detector arrived at the Temple Mount.UNLIKE its countless previous deployments, the detector had hardly been planted in its latest location for 48 hours when it abruptly vanished.Initial reports claimed this happened because some local worshipers were insulted by the detector’s insinuation that they might be related in some way to the religiously fueled human bombs who are the cause of the metal detector’s centrality in postmodern life.The reports were wrong. The metal detectors were spat out not by the worshipers headed to Mount Moriah, but by the mountain itself.Like the Bible’s (Judges 9:15) fruitless thornbush, which, after the fruitful olive, fig, and vine refused to rule over the trees, agreed to rule instead of them, but by issuing fire that would “consume the cedars of Lebanon” – the lowly mound that lives in the shadows of the surrounding mountains of Olives, Scopus and Evil Counsel, this week said: “Metal detectors? on my forehead, shoulders and hips? That’s like planting a Geiger counter under the Chernobyl reactor’s dome, or a water meter in the middle of the ocean, or a lie detector under Donald Trump’s tongue. You don’t look for bombs anywhere around me. I am the bomb itself.”