Israel, they say, is a country with roads, cities, towns and town squares, like any other. 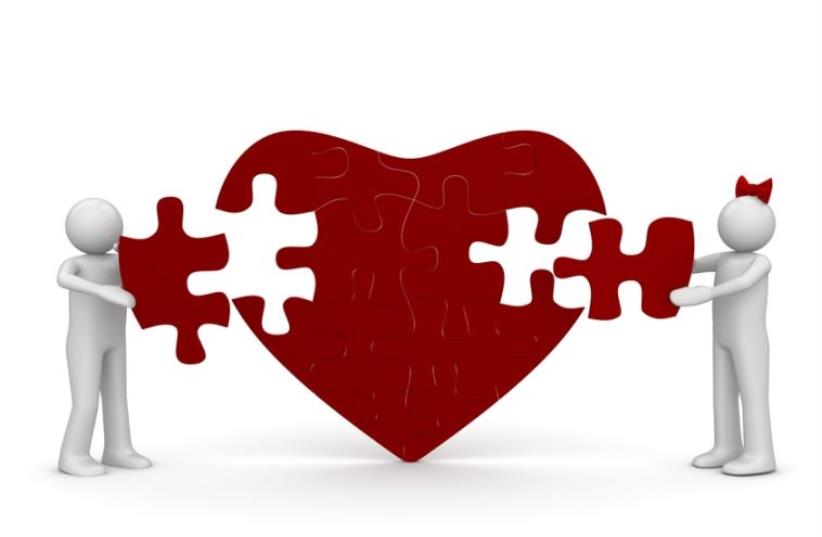 Love puzzle
(photo credit: INGIMAGE)
Advertisement
There is a tendency among some not to romanticize Israel. For them the country is like others, albeit with far greater security challenges.Israel, they say, is a country with roads, cities, towns and town squares, like any other.For me, Israel is the most romantic country in the world. Some nations are built on a dream. Israel is the dream itself. Arriving as a visitor you awake fully to bountiful beauty, and it never grows old. Visiting for the fiftieth time is like visiting for the first.And in truth there are no visitors. Arrive in Israel and you are instantly family. My daughter and sonin- law were pushing a stroller in the sand two days ago. In a minute four young men jumped to their feet to help carry the children. Israel is a family.My son serves in the IDF. Seeing him in his uniform at the airport was staggering. For 2,000 years the Jews have been slaughtered. They were given no choice but to die. They did so with valor knowing that the only act of defiance available to them was to die proudly as Jews.Then, in April 1943 at Passover Mordechai Anielewicz summoned his ragtag group of 700 Warsaw Ghetto fighters. Armed with nothing but a few pistols and firebombs, he informed them their choice was not between life and death; they would certainly fail in their fight against Nazi Germany, the most powerful army in Europe. Like so many Jews before them they had no choice but to die. But, he told them, unlike generations before them they had a choice as to how they would die. They would either fall as free men who had fought for their liberty or they would die at the hands of the SS in the crematoria.They died as some of the bravest Jews who had ever lived. Anielewicz remains to this day the father of all modern Jewish resistance.But a short five years later the Jews had finally pushed the limits of choice to their logical conclusion: not whether to die as free men but rather to live as free men and women. They could, in their ancient homeland, fight back in 1948 against five invading Arab armies promising a renewed genocide, and establish a democratic nation, free of the Arab tyranny that surrounded them.Writers before me point out that perhaps the most sinister contribution of the Nazis to history was the musselmen, the living dead, the men and women of the concentration camps haunting the barbed wire enclosures, with hollowed-out eyes, bereft of any human spirit, reduced simply to the search for rotten bread. The Nazis had succeeded – among those kept alive for work – not only in enslaving a once-free people but in making them living corpses in whom the divine spark had been all but extinguished. That is how the American, British and Russian liberators found them: emaciated bags of bones barely capable of even begging for soup.Not long ago I asked Elie Wiesel, the living face of the six million, about the searing honesty he expressed toward the end of his Holocaust classic, Night, when he revealed that his father, consumed with fever, asked him in the death camp barracks for water. Wiesel, emaciated, starving, infirm and famished, had hoped that after spending weeks taking care of his typhoid-ravished father he would finally be liberated from his care. When his father begged him for water in the middle of the night, Wiesel, freezing and barely holding on to life himself, could not summon the energy to even respond. In the morning the pleas had ceased. Wiesel’s father had expired. Wiesel was free at last.“How did you write those haunting words?” I asked.“I wrote them because if I was not honest in the book there was no point in writing it,” he said.But not only would Elie Wiesel become reanimated, he would become the greatest chronicler of the greatest crime in human history, thereby lending dignity and eternity to the six million martyrs, among whom were 1.5 million children. In the process, he would become a great Jewish light unto the nations, winning the Nobel Peace Prize.But the point remains: the Nazis had reduced even a soul that bright to the necessities of simply staying alive. The Nazis sought to transform human beings into animals.The difference between an animal and a human is that an animal can focus on nothing save survival.Lacking dreams, absent of vistas and horizons, the animal has no conception of maximizing its potential.The Nazis sought to reduce the Jews to beasts, bereft of human ambition, striving and feeling.Yet just a few short years later the Jews did not just aspire, they dreamed the ultimate dream: to return their ancient homeland and reconstitute themselves as a nation prepared to fight for independence, identity, dignity and human rights.That dream courses through the arteries of all that Israel. To miss it is to overlook Israel’s magic. It’s to be blind to the defiant nature of Israelis.Israel is not Sparta, committed as that ancient city-state was to victory for its own sake. Israel fights simply to defend life and because Jews deserve better that simply being granted the choice of to how to die.In Israel, everything lives. From the beautiful spring flowers that are now in bloom, to the settler communities surrounded by danger but who live fearlessly, to young men and women like my son and daughter who serve in the military without any bravado or militaristic inclinations save to defend the innocent civilian population from attack.

Am Yisrael Hai! Israel is alive! The author is the founder of The World Values Network and is the international best-selling author of 30 books, including his forthcoming, The Israel Warriors Handbook.Follow him on Twitter @RabbiShmuley.
Advertisement
Subscribe for our daily newsletter