No one is 'excluding' advocates for American-style liberal Judaism - opinion

Hess is blaming the Orthodox rabbinate for rejecting the foreign ideal of pluralism, rather than taking responsibility for trying to change the definition of Judaism.

By RABBI PESACH LERNER
‘WHAT ARE the effects, in Israel, in the US, and the rest of the world, of the perceived opinions of American Jewry?’
(photo credit: REUTERS)
Advertisement

In a recent op-ed in these pages (“Revivi is not alone,” October 29), Conservative Rabbi Yizhar Hess wrote – as he often does, using similar language – that “Orthodox leaders ostracize the Reform and Conservative streams of Judaism.” It is long overdue that we put this myth to rest. As an American rabbi who has followed the collapse of the liberal movements on these shores, I must point out that there are only two things that “Orthodox” leaders reject: artificial labels that divide Jews into boxes, and the arrogant wish of some to redefine the standards of Judaism for the entire Jewish nation.

Was Maimonides “Orthodox?” Was Rabbi Isaac Luria, the kabbalist? Or Hillel, famous for his love and patience toward all Jews, for that matter? Hess would be the first to bristle at such a notion, claiming them as his intellectual forebears as well. Yet all three ardently promoted a code of Jewish conduct that the American liberal movements roundly reject. Hess may value “Jewish pluralism,” but the Judaism inherited from our forebears is emphatically not pluralist.

With all respect to Efrat Mayor Oded Revivi, stating (in “Walking the narrow bridge with Rav Melamed,” October 22) that “the Talmud and Jewish tradition are replete with opposing views” follows the paradigm of missing the forest for the trees. The Talmud not only states far more agreements than arguments, but assumes a common basis: the rabbis all believed in God, that the commandments of the Torah were to be followed and that Shabbat runs from Friday evening through Saturday night. There was no need to state these and the host of other foundational concepts upon which the Talmud’s debates were built.

In other words, there isn’t an argument in the Talmud that, in a different context, wouldn’t be dismissed by activists as “nitpicking.” The rabbis didn’t argue to express their differences, but to seek the truth down to the last detail. The idea that there is, in fact, one truth has been the Jewish way for millennia – and profoundly at odds with the declared beliefs of the American liberal movements.

Set religion aside for a moment. Israelis, like most everyone else outside North America, define “football” as what Americans call “soccer.” Given that kaduregel was solidly identified as soccer when the Israel Football League (IFL) was formed to play American football, organizers decided to simply use a transliteration from English for their Ligat Futbol HaYisraelit.

No IFL players have ever come onto the soccer pitch with helmets and shoulder pads, demanding to play in the same league as the Maccabi Tel Aviv Football Club (which plays soccer) while throwing a prolate spheroid down the field and showing the Maccabi players what “tackling” means in the American sport.

The situation here is precisely analogous, and Judaism is considerably older than soccer. No one is “ostracizing” advocates for American-style liberal Judaism; it is simply that their ideology is not shared by Hillel, Maimonides or Rabbi Luria. Hess is blaming the Orthodox rabbinate for rejecting the foreign ideal of pluralism, rather than taking responsibility for trying to change the definition of Judaism. 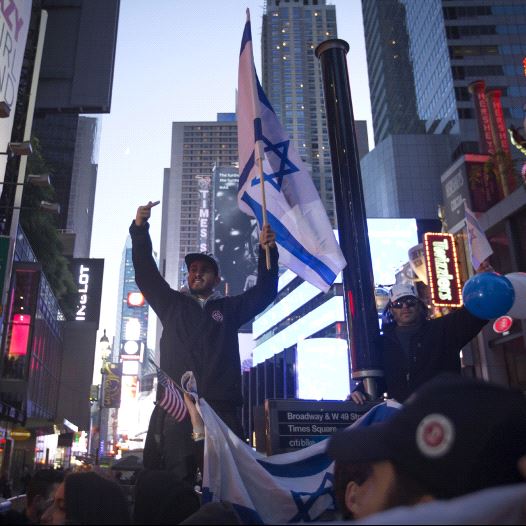 Pro-Israel demonstrators chant slogans in New York City in 2015. One segment of American Jewry that has drawn closer to Israel these past 50 years is the 10% who are Orthodox (credit: REUTERS)

Hess omits mention of the impetus behind his sudden push for recognition in Israel, but it is obvious: the catastrophic implosion of the same liberal movements at home in America. According to the Pew Research Center, American adherents of the Reform or Conservative movements are among the least religious Americans, so lacking in devotion that self-described secular Israelis are far more likely to engage in Jewish practices. Nearly 70% of American non-Orthodox marriages are to a non-Jewish spouse, while “Jews of no religion” now constitute the largest American Jewish “denomination.” Labeling and dividing Jews into denominational boxes has proven an unmitigated failure.

The turn of many American Jews against Israel has nothing to do with prayers at the Western Wall or whose rabbinic standards are paramount – they are not attending synagogue or seeking rabbinic guidance in America, so why would they care about these matters in a country they don’t even visit? The American Jews investing, touring and studying in Israel, not to mention making aliyah, are overwhelmingly observant Orthodox. Meanwhile, the American liberal movements have produced youth, even young rabbis, so “woke” that they have blinded themselves to Israel’s reality.

It is obvious, for example, that when only one country in the Middle East has both Jews and Arabs in its government, only a bigot would call that one country “apartheid.” This truth eluded the 90 rabbinical students of these movements, who this summer condemned Israel for “violent suppression of human rights,” referring, in context, to the IDF preventing Hamas terrorists from bombing Israeli kindergartens. Only a fool would imagine that changing Israel’s standards for Jewish marriage or kashrut to conform to these students’ delusions will solve anything.

Orthodox leaders do not ostracize any Jew; in fact, they recognize no artificial distinctions between “Reform” Jews and what the Reformers called “Orthodox.” Anyone is more than welcome on the playing field of Judaism, but none of us have license to change the rules of the game. Changing Israel’s laws will not change traditional Judaism, but would permanently divide the Jewish people in Israel in precisely the way it has in America, with the same devastating consequences.

Hess would do better teaching young Conservative rabbinical students to appreciate the true nature of the Middle East conflict, and the value of a country that offers refuge for all Jews. Perhaps, having learned more of both ancient and modern Jewish history, and still more of Bible and Talmud, they will begin to appreciate the beauty of the State of Israel and Jewish tradition, and stop trying to drag Israel and Judaism offside.

The writer is founder and chairman of the Eretz Hakodesh Party in the World Zionist Organization, a member of the Board of Governors of the Jewish Agency for Israel and president of the Coalition for Jewish Values.