‘We are all Peshmerga’ – a call for recognition of Kurdish statehood

The bravery and courage of the Peshmerga forces has been evident in world media in recent weeks, with reports saying they’ve protected innocent civilians from terrorist attacks leaking into Iraq from Syria.

By ZORAV DARISIRO
JUNE 23, 2014 21:52
Hesen Şerif, one of the top ten most famous living Kurdish artists is expressing his support for the campaign.
(photo credit: Courtesy)
Advertisement
The Peshmerga are heroes – a beacon of hope and peace not only to the people of Kurdistan, but also to the rest of the Middle East. A Facebook/Instagram campaign in support of the Peshmerga is in the making, called “We Are All Peshmerga” to express admiration for the Peshmerga’s resilience and effectiveness in the face of terror.The bravery and courage of the Peshmerga forces has been evident in world media in recent weeks, with reports saying they’ve protected innocent civilians from terrorist attacks leaking into Iraq from Syria. The terrorists go by the name “Islamic State of Iraq and Sham” (ISIS), indicating their intention to establish a Sharia state based on Wahabi-Salafist interpretations of Islamic law – rules which can be deemed backwards at best.The Iraqi army is reported to have fled en masse, leaving vehicles, weapons and equipment – they even shed their military attire in fear of being recognized. 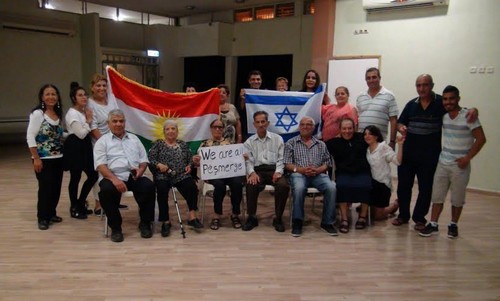 Kurdish Israelis
Peshmerga forces stepped in to save the lives of hundreds of thousands of people in the Mosul, Kirkuk and Diyala provinces.Most of the Iraqi military equipment, it appears, has fallen into the terrorists’ hands, making them better equipped than the Peshmerga. For this we can thank the US, which refused to arm the Peshmerga out of fear that a mighty Kurdish army would lead to Kurdish independence.Alas, Polat Talabani, commander of the counterterrorism unit of the Peshmerga, said in a recent interview with The Christian Science Monitor, “We are in it 100 percent, but wars are not fought without ammunition. We can only hold out for two weeks in Khanaqin with current supplies.” The commandos under Talabani’s leadership are a 160-strong battalion that received Delta Force training under US supervision in 2003.However, what the Peshmerga lack in weaponry they make up in courage and endurance. Moreover, as last weeks’ events proved, no weapons can overcome their sheer determination. It is not for nothing they are called “Peshmerga,” which means “those who face death” in Kurdish. This name was awarded the fearless warriors during the establishment of the Kurdistan Republic, with had its capital at Mehabad in Iranian Kurdistan in 1946.The president of the republic, Qazi Mohammed, was charged with “treason” and, along with his cabinet ministers, hanged at the main city square, Çwarçira. Immediately after hanging the “traitors,” the Iranians set fire to all Kurdish books and libraries.This was not the first or the last time Kurds would be tortured, hanged or shot for “treason” by a state for which they held no allegiance or loyalty. Iran, Turkey, Syria and Iraq have all punished Kurds for simply being Kurdish for centuries.and speaking Kurdish “Iraq,” “Syria” and “Turkey” are all states with shorter lifespans than the Kurdish aspiration for statehood, which was first set on paper by Ehmed Khani in his epic love story, Mem û Zîn, in 1692.One can argue that the tolerance and acceptance that Kurds display toward ethnic minorities, despite their own history of being discriminated against, is astounding. Kurdistan is a mosaic of ethnicities and religions. Assyrians, Armenians, Chaldeans, Turkmens, Shabaks and Arabs are in the ranks of Pehmerga forces, and they fight side by side with their Kurdish compatriots to defend their families, hamlets and a peaceful future for their people. The region includes more than five religious denominations: Christians, Jews, Muslims of both Shia and Sunni allegiance and adherents of Kurdistan’s own indigenous religions, Zoroastrianism and Yezidism, all of whom live serenely as neighbors. Few other nations in the Middle East, if any, can boast that church bells and mosque muezzins can be heard simultaneously in one and the same hamlet.With roots in such diversity, the Peshmerga are an example of unity in the face of growing sectarianism for the rest of the Middle East. More recently, the Peshmerga and the Kurdistan Regional Government (KRG) have taken in half a million refugees fleeing from ISIS in Mosul alone. A staggering number, considering the KRG itself has a population of just 5.2 million according to the KRG’s own official numbers.Not only are the Peshmerga diverse in ethnic and religious backgrounds, but since the very early days of the Kurdish struggle for independence, women have had an important role in protecting Kurdistan from marauding vultures and thieves while the men were away. The women of Kurdistan are famous in literature for their seductive beauty, and more so in oral tradition for their strong character and intellect, with many heroines and brave women populating Kurdish children’s stories.The record shows women in Kurdistan have a history of serving in prominent positions; Asenath Barzani was the first Jewish woman to become an ordained rabbi, in the early years of the 17th century.Assyrian (and Christian) Margareth Shello was the first woman to serve in the ranks of the Peshmerga, joining in 1960 under the command of General Mustafa Barzani, having returned to South Kurdistan after a decade in exile in the Soviet Republic.General Mustafa Barzani, who was the head of the 1946 Kurdistan Republic’s army, is often quoted as having said, “Sêr sêr e, çi mêr e çi nêr e,” meaning, “Whether male or female, a lion is still a lion.”The Elite Women’s Unit has 600 registered recruits, yet there are no accurate numbers available for how many women currently serve in the Peshmerga. One can only assume that they number in the hundreds, if not the thousands.Although from Margareth Shello to today’s head of the Elite Women’s Unit, Colonel Rasheed, there have been thousands of women Peshmergas in Kurdish history.Kerkûk, a deal breaker during the 1975 negotiations between General Barzani and Saddam Hussein, is now under Kurdish control again. Previous naïve policies of appeasement toward the US and the central Baghdad government saw the Peshmerga leave the city to the Iraqi army, after having liberated it from Saddam Hussein’s clutches, in favor of a political solution enshrined in article 140 of the Iraqi constitution. Naïve because none of the conditions described in article 140 have been fully implemented since the inauguration of the constitution in 2005.The Peshmerga currently control all of the historic and majority Kurdish areas of South Kurdistan, or “Iraqi Kurdistan.”Still, as you read these words, hundreds of refugees are making their way to the safe and serene Kurdistan Region, which is defended by the brave Peshmerga.At a time when the US is wary of war and cautious of aiding the Iraqi government with military personnel to fight the terrorist threat, ISIS terrorists are ever making new advances. The only resistance the terrorists have met has been from Peshmerga forces on the barricades, stepping up to defend their liberty, their homeland and their people.The Peshmerga are heroes.The author is a student of Political Science at Østfold University College, Norway and a scholar on Kurdistan and the Kurds.
Advertisement
Subscribe for our daily newsletter