The level to which discourse on the issue of Israel by its purported supporters has descended to the ideological gutter. 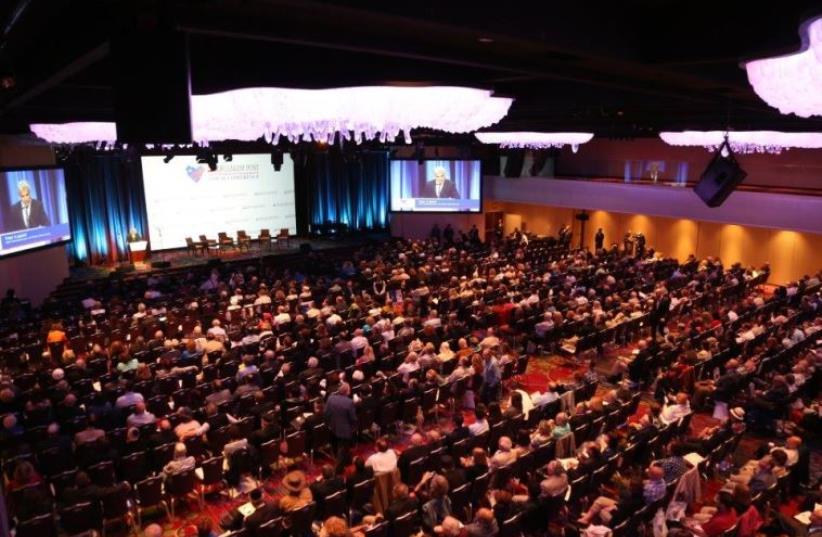 JPost Annual Conference
(photo credit: SIVAN FARAG)
Advertisement
The level to which discourse on the issue of Israel by its purported supporters has descended to the ideological gutter was reflected at this week’s Jerusalem Post Conference in New York.A stellar cast of Israeli and American personalities including US Treasury Secretary Jacob Lew, US Rep. Nita Lowey, National Infrastructure Minister Yuval Steinitz and Yesh Atid leader Yair Lapid joined security experts such as former IDF chief of staff Gabi Ashkenazi and former head of the Mossad Meir Dagan for a riveting day of speeches and panels on the vital issues facing Israel and the US.All of them, as well as the other speakers and panelists who appeared at the conference, love Israel – without question.But as with any monumental issue that induces so much passion, there are divergent views of how to insure Israel’s health and security. That doesn’t mean one is less valid than the other.
See the latest opinion pieces on our page
A Meretz supporter is every bit as much of a Zionist as a Bayit Yehudi member.However, a small but vocal minority of the New York audience who gave up their Sunday and paid good money to attend the conference to hear what the dignitaries had to say was not willing to actually listen if their statements didn’t dovetail with their own beliefs. Instead they booed Lew, heckled Lowey and attempted to drown out anyone who attempted to claim that the Obama administration wasn’t the devil incarnate or who didn’t agree with their take-no-prisoners approach to safeguarding Israel.Some commentators have tied in the boorish behavior of those participants to the steady stream of opinion pieces in the Post that criticize President Barack Obama’s stance on preventing a nuclear Iran or policy toward the stalled Israeli-Palestinian negotiations. In their minds, those columns provide a carte blanch for incitement against anyone who thinks differently.But those very commentators neglected to mention that in addition to providing a home for the staunchly right-wing ideological views of Caroline Glick, Sarah Honig and Martin Sherman, the Post regularly features diametrically opposite viewpoints by the likes of Gershon Baskin, Uri Savir, David Newman, Jeff Barak, Larry Rifkin and many others.In addition, the paper’s editorial line has been staunchly in favor of a resumption of talks with the Palestinian Authority that will lead to a two-state solution, and regularly praises the current US administration’s support of Israel, whether militarily, financially or diplomatically.To blame the messenger that presents all sorts of viewpoints for sparking an uncivilized and uncultured assault on certain speakers, including a senior representative of Obama, is more than a little disingenuous. In fact, that kind of criticism is similar to the almost-identical take no prisoners approach on the Left often directed against anyone who expresses views that don’t jibe with the politically correct mantra that the only obstacle to peace in the Middle East is Benjamin Netanyahu’s right-wing government.Is what happened in New York on Sunday very different from what happened almost a year ago in Tel Aviv, at the Israel Conference on Peace organized by Haaretz, when Bayit Yehudi chairman and then-economy minister Naftali Bennett and was heckled, booed, called a murderer and allegedly hit in the back on his way out of the hall? Yet, in the aftermath, nobody blamed Haaretz for creating that volatile climate of violence by presenting the steady flow of hateful anti-Right diatribes by columnists like Gideon Levy.The Post is proud of its diversity, and tries to be as inclusive as possible by creating a broad umbrella within the Zionist spectrum. But in doing so, we condemn all those who are so blinded by their ideology that they’ve forgotten to differentiate between their friends and their enemies.It’s more than a little ironic that those conference attendees who made a mockery of civil debate in the misguided belief that by insulting one of Israel’s best friends in Lew, they were standing up for Israel, were likely all American citizens.One would think that if they really felt so strongly about Israel and how they perceive the US policy is damaging the country’s security, they would be bold enough to pick up and move here, instead of hissing from their comfortable American seats. At least their booing and catcalls would then fit right into the social norms of the country they live in.As it is now, they are expressing contempt for their own country of the United States while providing no tangible benefit – and doing grievous damage – to the country that they profess allegiance to, Israel.As Ronald Lauder, the chairman of the World Jewish Congress and the president of the Post’s conference in New York, said in his opening remarks, we can disagree on the ways to achieve a strong Israel, but it’s most important to keep the argument inside the family.Through their disrespectful behavior aimed at Lew and all those who might not see things in black and white terms, that small minority of hecklers in the audience violated Lauder’s tenets and in essence removed themselves from the umbrella.It would be nice if they open up their hearts enough to find their way back in.