Pharaohs, Exodus and the strangers among us

Many centuries after the exodus from Egypt, there arose a Jewish ruler who forgot about the genocide in Darfur and knew not the situation in Eritrea. 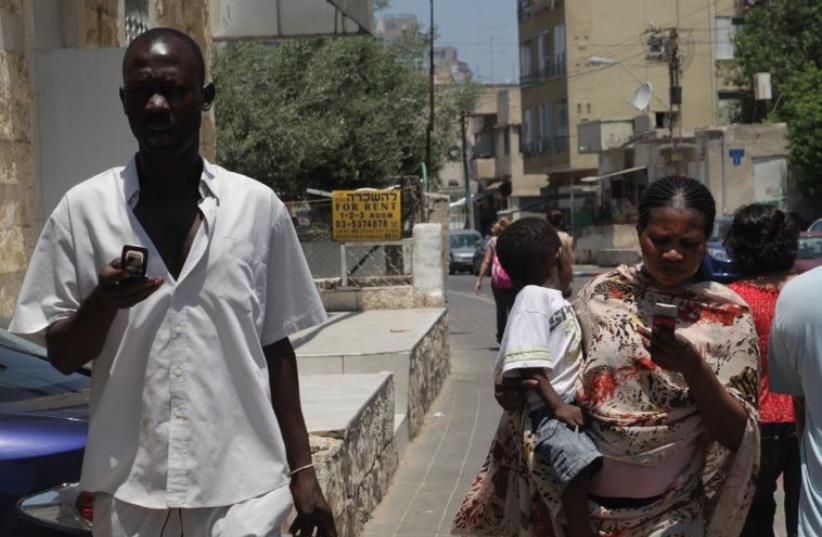 A Sudanese woman checks her cellphones as they walk along a street in Tel Aviv
(photo credit: MARC ISRAEL SELLEM/THE JERUSALEM POST)
Advertisement
Once upon a time in the land of Egypt, there arose a Pharaoh who knew not Joseph. He fretted that the Jews were too numerous, multiplying rapidly and constituting a security threat to the country. “Let us deal wisely with them,” he said, and worked on a plan to get rid of them by having the midwives kill all the male Israelite children as soon as they popped out of the womb. This didn’t work because the midwives didn’t obey.Pharaoh then went to Plan B, which entailed enslaving the male Israelites and making their lives so miserable that they wouldn’t want more children. Pharaoh’s treatment of the Israelites angered God, who then brazenly intervened in Egypt’ domestic affairs. The rest is history.Many centuries later in the Land of Israel, there arose a Jewish ruler who forgot about the genocide in Darfur and knew not the situation in Eritrea. He declared that the African infiltrators who called themselves asylum seekers were too numerous (60,000) and constituted a threat to Israel’s security and national identity. If not dealt with they would soon become 600,000.In dealing with African asylum seekers, the Jewish ruler was, of course, more humane than Pharaoh. He had no plan to kill their male children or to enslave them. We Jews don’t do that kind of thing.He said, “Let us deal wisely with the infiltrators and build a huge fence in the south which will stop them from entering.”And behold, the fence worked! Since the fence was completed, few infiltrators entered Israel.But the fence did not suffice to rid the country of the uninvited African strangers that were already here.“Let us deal wisely with the infiltrators and build an open prison center in Holot and embitter their lives by treating them harshly and depriving many of their freedom. Then they will surely want to leave our land, and new asylum seekers will not want to come.”Now conditions in Holot are far better for the Sudanese and Eritreans than those in the prisons in their home countries.No torture takes place in Holot.Detainees are not shot for complaining or violating regulations.By the end of 2015, the infiltrators had filled Holot to capacity. Although the number of infiltrators had declined, this was not sufficient to rid the country of unwelcome infiltrators or even to get most of them out of south Tel Aviv.In dealing with our African strangers, we have forgotten the teachings and lessons learned in Egypt. Exodus speaks to all Jews: secular, religious, left-wing and right-wing. The Exodus experience provides guidelines for empathizing with the stranger and creating refugee policies that reflect Torah values.Let’s look at some of the rules concerning how not to treat strangers (non-citizen resident aliens): a) “You shall not wrong a stranger or oppress him, for you were strangers in the land of Egypt” (Exodus: 22:20).Are we wronging the Eritreans and Sudanese in accusing them of being infiltrators and a threat, and oppressing them though harassment and imprisonment in detention camps? Do they pose a demographic or security threat? (b) “You shall not oppress a stranger for you know the feelings of the stranger, having yourselves being strangers in the land of Egypt” (Exodus:23:9).Are we not taught to not become like our former oppressors? Have we no empathy for Sudanese fleeing genocide and Eritreans escaping involuntary servitude and dictatorship? Do we not remember what we felt when many nations refused refuge to Jews fleeing the Nazis? (c) “You shall not subvert the rights of the stranger or the fatherless” (Deuteronomy: 24:17).Are we not enjoined to treat widows, orphans and the stranger, the weakest groups in society, justly? Should we put African asylum seekers who are not criminals in detention centers like Holot? Should we deny them due process and fair and timely processing of applications for refugee status? Let us also ponder some of the positive commandments regarding treatment of strangers.(a) “...God , who shows no favor and takes no bribes ... befriends the stranger, providing him with food and clothing.You too must befriend the stranger, for you were strangers in the land of Egypt” (Deuteronomy:10:17-19).Do we offer sufficient opportunities to African asylum seekers to work to provide for their own food, clothing and basic needs? Do we offer them sufficient access to our medical facilities? Do we treat asylum seekers with respect and befriend them? (b) “The stranger who resides with you shall be to you as one of your citizens.You shall love him as yourself, for you were strangers in the land of Egypt” (Leviticus:19:34).Although a beautiful and noble goal, it is difficult to love strangers and to give them all the rights of citizens. But are we not at least capable of offering African asylum seekers respect and basic human rights? Jews are taught that we should first help our own needy before helping others.However, the African asylum seekers here are not necessarily a burden in need of charity. If given the opportunity and treated according to Exodus standards, they can fill jobs, pay taxes and contribute to our pension and health funds.They can enrich our culture, enhance our knowledge of Africa, and be friends and allies when they return.The Pharaoh who knew not Joseph, oppressed our people and refused to let them go. He and his country paid a heavy price for his policies. The Pharaoh who knew Joseph welcomed his family, even though they were strangers with different religious practices and customs and gave them a place to live and work, and protection. Which policies toward our African strangers should Israel follow? Those of the Pharaoh who knew not Joseph or those of the Pharaoh who did? The writer is a Jerusalem-based author and consultant specializing in African democracy and development.