By inspiring love, we must attempt to express the glories of Shabbat. And love means accepting with love even those who decide to reject the laws of Shabbat. 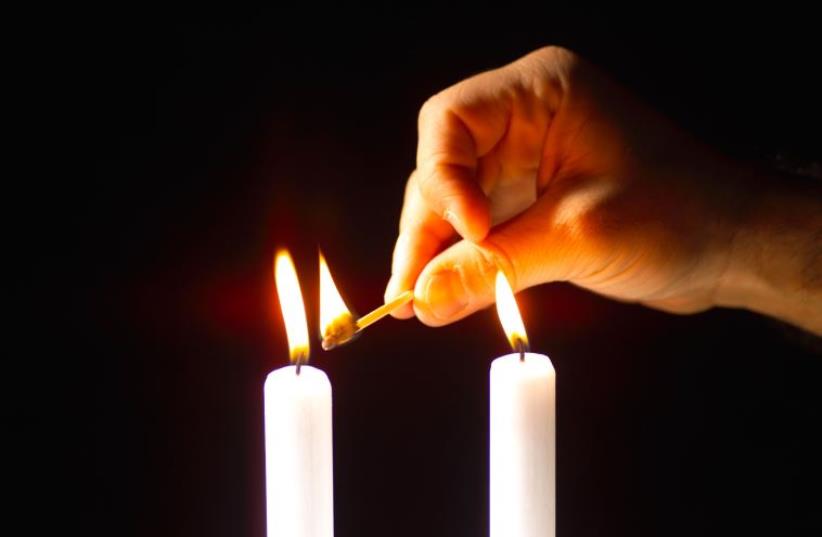 Shabbat candles
(photo credit: ING IMAGE/ASAP)
Advertisement
‘And the entire nation responded together and said, ‘Everything the Lord has spoken we shall do’” (Exodus 19:8).Religious coercion has long threatened Israeli society, bringing to the surface all the tensions inherent in our unprecedented experiment of maintaining a state that is both “Jewish and democratic.” Is such an experiment viable? Our global village knows two extremes: on the one hand, fanatic Islamist states whose citizens are held captive by the latest fatwa decreed by their sheikhs and ayatollahs.And on the other hand, the democratic model of the United States of America, which grants every citizen his/her inalienable right to life, liberty and the pursuit of happiness, and freedom of worship, speech and ideology, insisting upon a clear and absolute separation between church and state. Is there room for a hybrid situation? A Jewish state without religious coercion? Religious coercion is certainly not a desirable goal. My revered teacher and mentor, Rabbi Joseph B. Soloveitchik, frequently noted that “religious coercion is an oxymoron.”This is because when a ritual act is coerced by an external political force, it ceases to have any religious or spiritual significance. Quite the opposite, in fact: it only enhances anti-religious antagonisms, pushing the unwilling participant much further away from true Divine service and commitment.What does our tradition have to say about religious coercion versus religious conviction? A dramatic interpretation of a verse from our weekly Torah portion, Yitro, tackles this issue head on.The Torah states, “And Moses bought the people out of the camp to meet with God, and they stood at the foot of the mountain” (ibid.).The Talmudic sage Rav Avdimi bar Hama comments that this verse comes to teach that God picked up the mountain and “held it over their heads like a barrel, threatening, ‘If you will accept the Torah, good; if not, there shall remain your grave sites’” (B.T. Shabbat 88a).Beyond the traumatic imagery, this is a difficult reading on a textual level. We have already seen how the Israelites accepted the Torah of their own free will (Exodus 19:8). In fact, God enters into a covenant with the Jewish people only after they declare of their own free will, “We shall do and we shall obey” (ibid., 24:7). God wants a freely accepted Torah, not a coerced Torah! Rabbi Soloveitchik explains the apparent contradiction between the verse and the Talmudic midrash by noting that indeed religious commitment and religious coercion are mutually exclusive terms.In The Lonely Man of Faith, the rabbi explains that the biblical description of freely accepted obligation refers to the “in general” acquiescence of the Israelites to live by the Divine Will, which they truly accepted of their own volition.In contrast, the Talmudic addition of coercion relates to the details of the religio-legal structure, concerning which different individuals at different times may be forced to comply. A comparison can be made to traffic laws: every intelligent individual accepts the necessity of speeding limits, but when he is caught overstepping the line, he may balk as he is forced to pay his ticket.Rabbi Meir Simcha of Dvinsk, a 19th century commentator on the Torah (Meshech Chochma) and of Maimonides’ Mishneh Torah (Ohr Sameach) goes even a step further.He insists that only a person who has announced that he is observant of religious law and wants to observe all the commandments may be compelled to uphold ritual law.In an open secular society, it goes without saying that in the realm of laws governing interpersonal relationships, a court of law can and must use coercion to establish a just society. People understand that such laws exist to help them adhere to the regulations that they know are for everyone’s good – including their own. However, with regard to laws between a person and God, enforced adherence will have the exact opposite effect and will only lead to resentment and anti-religious feelings.I suggest a very different approach. It is not the promulgation of laws that secular Israelis neither understand nor accept which will increase respect for and observance of Shabbat. Rather, it is through their understanding that the religious community loves and respects them, and that the religious will make every attempt not to enforce, but to inspire.I believe that most Israeli citizens would understand and even agree to the closing of commercial businesses on Shabbat, a day of rest that the Torah bequeathed to the world, while advocating that cultural programs remain open. With halachic ingenuity, this would be possible in a way in which Shabbat sanctity could be maintained, and the beauty of our tradition – with songs, music and food – could be brought to a large secular audience (as suggested by Prof. Ruth Gavison and Rabbi Yaakov Medan).As far as public transportation is concerned, there must be a way of enabling private, non-Jewish-controlled bus lines for non-religious areas, so that secular Jews without cars would not experience undeserved hardship because of Shabbat.In the final analysis, it is not through enforced laws, but rather by inspiring love, that we must attempt to express the glories of Shabbat. And love means accepting with love even those who decide to reject the laws of Shabbat.The author is founder and rosh yeshiva of the Ohr Torah Stone network of educational institutions and social programs, and the chief rabbi of Efrat.