Requiem for a homeland

The Armenian Genocide was more than just the attempted extermination of a people; it was the destruction of an ancient homeland. 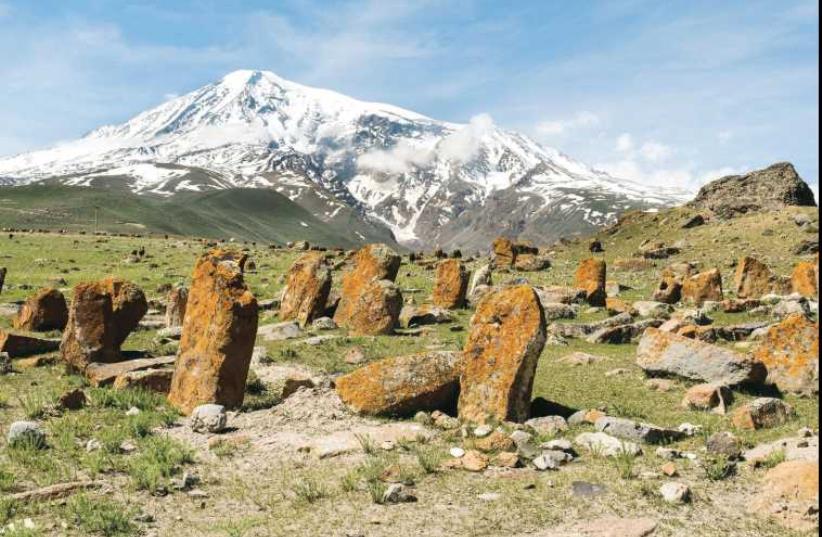 Mount Ararat overlooking a field of eroded khachkars (Armenian cross-stones) in Western Armenia, from the book ‘100 (1915-2015)'.
(photo credit: HRAIR ‘HAWK’ KHATCHERIAN)
Advertisement
Behind the Igreja de São Domingos in Lisbon, in Rossio Square, is a plaque from 2006 that commemorates the 500th anniversary of the “Jewish victims of intolerance and religious fanaticism.” I noticed a wealth of Sephardic Jewish heritage and history on my trip through Iberia as I explored Andalucía en route to Toledo. While I appreciated the history of the Sephardim, their story had a deeper meaning for me as a descendant of survivors of the Armenian Genocide.The ethnogenesis of the Sephardim can be traced back to Iberia at the turn of the second millennium. In 1492 they were given an ultimatum to either convert to Catholicism or be expelled from Spain entirely. Many arrived in the Netherlands, and subsequently became some of the first settlers of what is now New York City. I heard their story in the synagogue of Santa María la Blanca in Toledo, and felt a strong connection to those who were able to recently embark on a pilgrimage to their ancestral town with historical relics, documents, and keys to their old homes. These visitors from New York spoke a 500-year-old version of Ladino – a mix of Old Spanish, Hebrew and Aramaic – which was no longer mutually intelligible with its modern speakers.As the grandchild of genocide survivors, I empathize with the longing of a group of people to visit the homes from which their ancestors were exiled. I hope to make a similar pilgrimage to Western Armenia, a right stripped of my grandparents’ generation by the Turkish government, headed by Mustafa Kemal, who took on the name Atatürk. The Armenian Genocide was more than just the attempted extermination of a people; it was the destruction of an ancient homeland.The New York Times published an article in March that reaffirmed the known date of the ethnogenesis of the Armenians, around the middle of the third millennium BCE; however the Republic of Armenia today only comprises a tenth of our historic homeland.
See the latest opinion pieces on our page
An excursion through Armenia today gives visitors merely a glimpse into our historic culture with ancient pagan monuments, picturesque monasteries, awe-inspiring archeological sites, and clues to the origins of the Indo-European people itself.My family’s roots originate in Western Armenia, a land within Turkey now devoid of ethnic Armenians – with the exception of the Islamized Hamshen in Trebizond. While most Eastern Armenians under the Russian Empire were spared, Western Armenians living under Ottoman rule fell victim to the Young Turk regime. Approximately 1.5 million perished from 1915 to 1923, starting with the deportations from Zeytun on April 8. Those fortunate enough to survive the First World War consequently faced the armies of general Mustafa Kemal, who wished to rid Turkey of any remaining Armenians in Western Armenia and Cilicia.The Armenian Genocide uniquely fulfills all five criteria of genocide set by the United Nations in 1948, including the forcible transfer of children from one group to another. Additionally, it resulted in the destruction and confiscation of an ancient homeland and an immense amount of wealth and property upon which the current Turkish elite built their economic infrastructure. Survivors of other 20th-century genocides were allowed to return home, but Armenians were not granted that same freedom.Turkish historian Taner Akçam describes the efforts of Turkey’s founders to modernize the country by ignoring its multicultural past for “the continuity and security of the state.” The decades following 1915 resulted in a continued erasure and destruction of the remaining Armenian cities, schools, churches and cultural sites; geographical locations were even renamed to fit this narrative.Armenians today are left with a fraction of their homeland located in the Caucasus. Western Armenians are in flux between the vast diaspora, a newly independent eastern Armenia, and the remnants of the lands from which they were uprooted. Consequently in 2010, UNESCO designated the Western Armenian language as “definitely endangered.” Without access to an ancestral homeland, the future of Western Armenian culture remains bleak.Spain recently passed legislation guaranteeing citizenship to those whose Sephardic ancestors were expelled in 1492. In December, Ladino music and singing could be heard at El Tránsito synagogue in Toledo where Hanukka was celebrated even in the absence of Jews. It took five centuries for Spain to acknowledge and reconcile its historical relationship with the Sephardim. Despite efforts by Turkey to ignore and subvert its significance for one hundred years, the reverberations of the Armenian Genocide still linger. Armenians are a nation of survivors that have had to adapt, rebuild, and be resurrected continuously throughout history. I hope it does not take five centuries before we can once again call Western Armenia home.  The writer is a descendant of survivors from Yozghat and Garin in Western Armenia.

Tags denial of the armenian genocide