The photos and videos published by news agencies and activists proved that Russia has targeted moderate rebel groups, specifically the Free Syrian Army, instead of Islamic State. 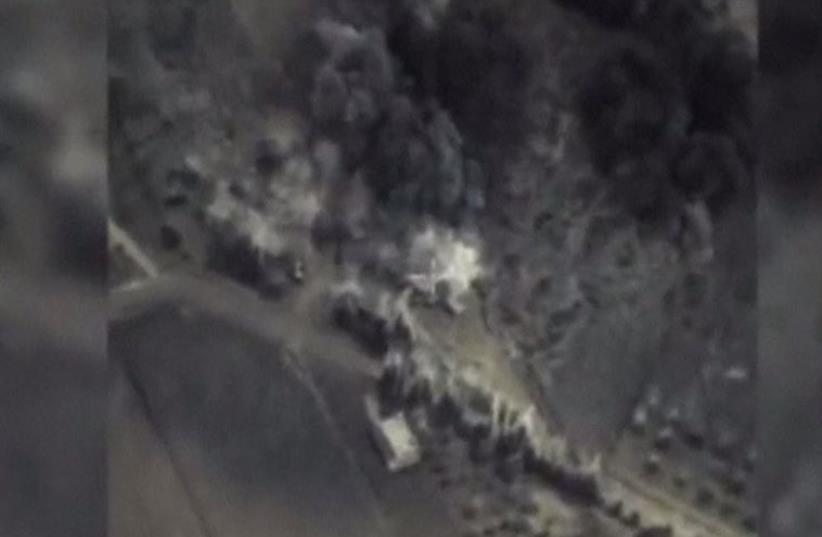 Russia releases footage of airstrikes in Syria
(photo credit: screenshot)
Advertisement
After two and half months of intervention in Syria, Russia continues to mislead the world about its achievements on the ground. The fact is that its intervention continues to kill civilians and target moderate rebels. The intervention has shown that Russian jets and its hi-tech military superiority are unable to change the balance on the ground, especially because its ally in the Syrian regime has a weak army.The first lie about the Russian intervention was its claims to be “shelling Islamic State,” whereas the photos and videos published by news agencies and activists proved that it instead targeted moderate rebel groups, specifically the Free Syrian Army. Fifteen of the FSA’s premises have been hit by Russia in northern Syria; the few Islamic State targets comprise only ten percent of the Russian air strike targets. Islamic State even benefited from Russian air strikes at times. For example, after a few days of Russian intervention, Islamic State made its biggest progress in months in the northern countryside of Aleppo.The terrorist group made gains as Russia hit the very rebels trying to combat Islamic State.THE SECOND lie we have heard is that Russia is “not targeting civilians.”In fact, their intervention has caused the deaths of more than 600 civilians so far, according to reports by authentic human rights networks working in documenting casualties in Syria in daily basis.Russia also lied about the regime’s doing away with barrel bombs, when in fact Russian helicopters continue firing these lethal bombs on the western countryside of Damascus and on the city of Dara in southern Syria, killing dozens on a daily basis. That carnage is documented by photos that follow the track of the bombs until they hit ground.We have heard Russian claims that it supports the FSA, but FSA commanders have wondered which FSA Russia “supports,” and if it really does, then why it is shelling the very group it purports to support. The Russian intervention maintains that it is supporting Bashar Assad because he is the elected president, when the world knows that the elections were rigged to pave the way for Assad’s easy victory.On the ground, Russia has completely failed to assist regime forces to make progress in two major operations in the Homs and Hamas countryside. These two attacks by regime forces failed, and rebels even progressed north of Hamas, seizing a strategic neighborhood near the Hama city center. The only progress by the regime has been in the southern countryside of Aleppo, where Iranian forces and Shi’ite militias have attacked rebels and seized towns with the support of Russian air strikes. That progress was not critical, however, as the forces led by the Iranian general Qasem Soleimani could not cut the main road between Aleppo and Idlib. According to sources, Russia lost dozens of fighters and there were even unverified reports say that Soleimani was wounded in battlefield.Last month Iranian news agencies reported the death of many Iranian officers killed in Syria, and supporters of the American officials released statements recently claiming “Iran pull[ed] out its soldiers from Syria” leaving the field to the Shia militias. The Russian failure in changing the balance in favor of the regime caused it to follow the regime’s method by random shelling of civilians in regions controlled by the opposition, aiming at the domestic civilian supporters of the rebels.Politically, although Russia succeeded partially in postponing Assad’s departure from the table of the Vienna conference and made some western countries leaders and officials soften their tones in regard to opposing the Syrian regime, their intervention hardened the stands of both Saudi Arabia and Turkey.For instance, the past two months have witnessed a major flow of antitank TOW rockets to the FSA-aligned groups, which contributed in a major way to the opposition group’s resistance against the momentum that the regime forces gained from Russian support.Saudi Arabia’s success in bringing together most of the armed opposition to Assad and other political opposition in Riyadh and managing to form a negotiating body representing them should be seen as a reaction to Russian intervention. In the wake of the Riyadh conference, the opposition may be more unified and gain legitimacy for the first time as a new body representing the majority of the Syrian people. They demand “Assad’s departure as a beginning of political transition,” according to the final statement released after the Riyadh conference.Russian arrogance in Syria caused the downing of a jet by Turkey and subsequently relations between the two countries worsened significantly.Turkey has begun to look for sources of energy other than Russia, indicating that the tensions may have economic consequences.When Russia intervened in Syria, some thought that it would help in reaching a political transition and that it could be a guarantor of minority rights in Syria. These hopes have been in vain, as Russia chose instead to take the regime’s side and fight for Assad’s survival.

The author is a Syrian journalist from Aleppo.
Advertisement
Subscribe for our daily newsletter