Shavuot is also an agricultural holiday, exactly 50 days after Passover. 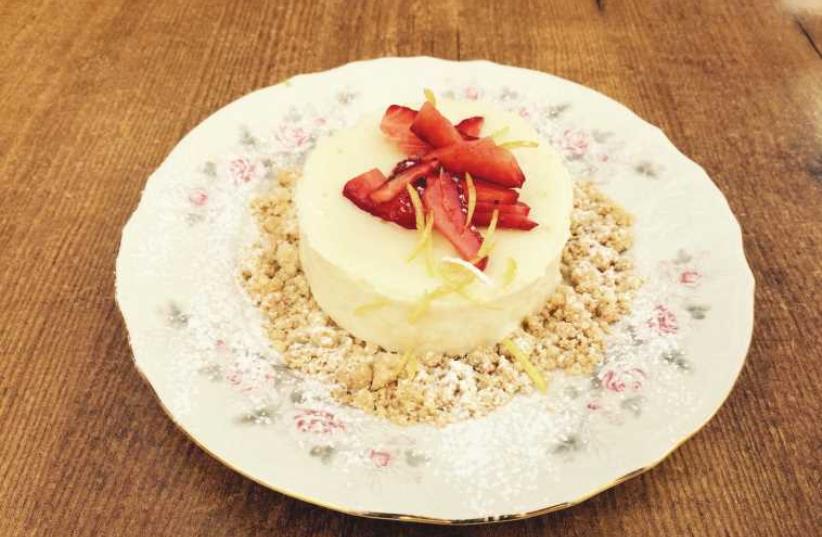 Goat cheesecake
(photo credit: GEDERA 26)
Advertisement
Jews are a gastronomical people. If we played a word-association game, it would be a strong reflex to say apples and honey to Rosh Hashanah; latkes to Hanukka; hamentashen to Purim; knaidlach to Passover and cheesecake to Shavuot. But all these foods, luscious as they are, belong just on the periphery of the festivals and are incidental symbols of the real meaning.Shavuot, a festival of mystic revelation, particularly illustrates this. Even though there are no real ritualistic demands, it has some unique customs including tikkun leil Shavuot, an all-night vigil of Torah study. It is exciting to go outdoors alone at exactly midnight because of the belief that at that moment, the heavens open and our prayers ascend straight to God. Whether true or not, it is a mystical moment that is quite thrilling.The origin of the all-night study session begins with a belief that on the first Shavuot, while waiting to receive the Torah, the Israelites fell asleep. At dawn, Moses had to awaken them and they came yawning and rubbing their eyes to the foot of Mount Sinai, arriving late for this momentous event. The tikkun or correction for this mishap has since been to stay up all night on Shavuot, studying Torah. There is also the allusion in the Zohar (1:8a) to Shavuot as a mystical wedding between Israel as the bride and the Almighty as groom.Shavuot is also an agricultural holiday, exactly 50 days after Passover. Even though the classic commandment of bringing bikkurim (first fruits) and offering two loaves of bread from the new crop can no longer be fulfilled because of the destruction of the Temple, here in Israel at kibbutzim and moshavim throughout the country, we can still witness the end of the barley harvest and the beginning of the wheat harvest.
See the latest opinion pieces on our page
This day is considered Israel’s birthday, when we accepted the Ten Commandments as the moral code by which we would live. By accepting these two tablets, we became God’s Chosen People, a term that embarrasses many Jews because they think it implies superiority. It does not mean that we are more beloved than the rest of mankind, but that we were chosen, for the purpose of embodying Judaism’s values. Our mission is to redeem the world in partnership with the Creator.We decorate our synagogues with greenery on this festival and we read the Book of Ruth. Set against the background of the barley harvest, it tells how a pagan Moabite woman embraced the faith of Israel out of love and loyalty to her mother-in-law Naomi. King David, the ancestor of our Messiah, was a descendant of Ruth and he is believed to have been born and to have died on Shavuot.Shavuot, the Festival of Weeks, is also known in the Bible as Hag Hakatzir (the festival of reaping), Hag Habikkurim (the festival of first fruits) and Atzeret (stopping) as it is the last day of the 50-day spring season.Every Israeli settlement celebrates the holiday in its own way. As the wheat harvest begins, they express in reading, song and dance the joy of the harvester. No matter how we celebrate this joyous holiday, we should remember that it means more than eating dairy foods and baking cheesecake. The giving of the Law at Mount Sinai marked our entry into national maturity and is Judaism’s greatest gift to mankind.