The Western Wall is our space – women’s and that of all Israel. 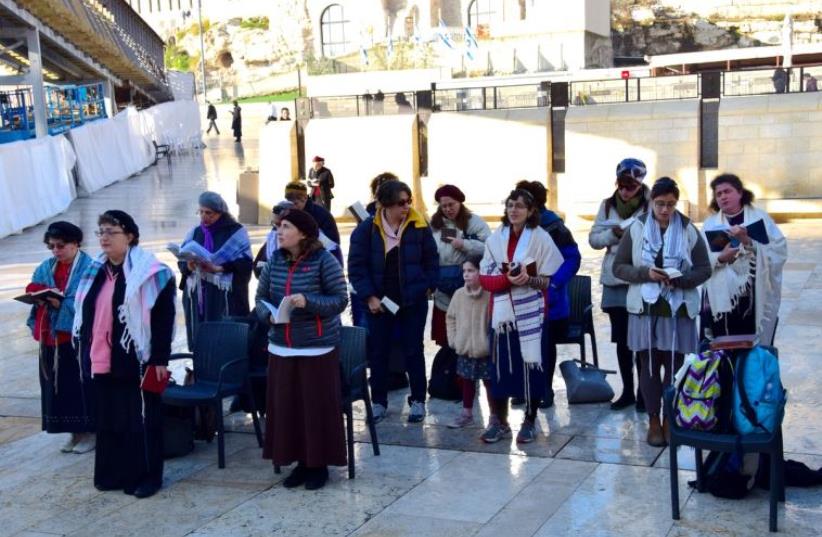 Women of the wall praying at the Western Wall
(photo credit: Courtesy)
Advertisement
Last week Calev Ben-David published a column in this paper (“A Wall of One’s Own”) about the deal to change the status of the Western Wall and its southern extension, the archaeological site called Robinson’s Arch. Ben-David made a number of points with which I and others who support Jewish women exercising our rights to pray as a group at the Western Wall agree, and others with which we differ vigorously. He also stated a number of major factual errors.Ben-David invokes what many feel at the Western Wall: alienation from the haredi (ultra-Orthodox) practice enforced there, de facto, without any open process or national debate about this having occurred. This is why he and others applaud the deal to put Robinson’s Arch – for years the site of mixed, egalitarian, prayer – officially under the auspices of the Reform and Conservative movements, giving these movements the state recognition they crave. The deal is not about establishing egalitarian prayer there but about this recognition. Nor is it about women having space for women’s prayer, out loud, with the option of donning tallit and tefillin, and reading Torah, because we have all this already, at the Western Wall, and exercise it regularly, including Torah reading, using scrolls we secret in. Subterfuge should not be necessary and we have a case before the Supreme Court to ensure open exercise of that right – already recognized by previous Supreme Court and district court rulings for all Jewish women.The Western Wall is not a synagogue – now, at least. Its official status is “national holy site.” It is repository of millennia of Jewish memory, hope, pain and devotion.Its supreme importance was self-evident in 1967, when Jews of all kinds, secular and religious, streamed there once it was in Jewish hands with access, we all believed, henceforth assured to all. All this would change, however, under the deal Ben-David celebrates.Ben-David does not mention that the trade-off for making Robinson’s Arch an official site of Reform and Conservative prayer makes the Western Wall officially a synagogue under haredi auspices, from which the women’s group prayer services we now hold regularly would be banned.The deal would vastly empower the same haredi establishment which anathematizes any whose custom differs from theirs, including the modern Orthodox, and which makes marriage, divorce, conversion and much else nightmares here.The deal is bad policy for Jewish women, including our Orthodox sisters, who will not participate in mixed, egalitarian services and who refuse to be marginalized at Robinson’s Arch. But it is bad policy even for those who wish the liberal movements recognized, because of the inestimable boost to haredi misogyny and contempt for other Jews that is intrinsic to the deal.I am a founder of Women of the Wall (WoW). I was at the first women’s prayer meeting there, in December, 1988, at which I read Torah. I was detained for donning the tallit I have worn for most of my life in prayer there. I was a plaintiff in the first Supreme Court case about this, and with others am involved in the current suit, being brought by the Center for Women’s Justice.WoW’s founding purpose was and for many of us remains diverse Jewish women coming together for prayer in mutual respect, acceptance, support and solidarity at the national holy site of our people. Contrary to Ben-David’s statement, the group never “campaigned for the right to conduct egalitarian services at the site.” I and other founders and activists did not sacrifice, labor and spend time in detention on behalf of egalitarian prayer. We are not the vanguard of other causes, though the deal appropriates our struggle in that unholy fashion, typical of what so often is done to women’s efforts.We are of, by, and for Jewish women. Our cause is self-sufficient, necessary – and, as I argued in my first published piece about all this, back in 1988 – holy, holiness being defined as loving compromise which enables us, despite and because of our differences, to come together at the Western Wall. We are the only group in the Jewish world which accomplishes the feat of mutual respect and accommodation in prayer. Our practice should be supported and replicated, not repressed, much less banned.We wish those who prefer Robinson’s Arch well, as long as their rights there are not established on the suppression of ours at the Western Wall and upon the violation of the very principle of open access for all Jews which was an essential part of the victory of 1967.The title for Ben-David’s piece recalls Virginia Woolf’s pivotal essay, in which the famous writer pondered why women had not produced great literary works throughout history. Since it could not be that women are incapable of such creativity, a truth Ms. Woolf of course exemplified, she explored the tangible circumstances necessary for anyone, woman or man, to write, summing these up with the now iconic notion of a “Room of One’s Own.” By this she meant dedicated space but also the support and encouragement needed to allow ideas to come to published expression. Writing after being barred from using the library at England’s most prestigious universities because she was a woman, Woolf raised the now famous speculation about Shakespeare’s fate had he been born female.The Western Wall is our space – women’s and that of all Israel. And women’s solidarity in prayer there is the functional equivalent of the rest of what Woolf meant by a “room of one’s own.” We will continue to give Judaism female face and form and voice – and one another support – at the Wall.

The writer is Professor of Jewish Studies and History at Oberlin College and award-winning author. She is a core activist in Original Women of the Wall, who seek to preserve and enact Jewish women’s rights to full religious expression at the Kotel. She lives in Jerusalem.