Tea in Syria, under Assad

They may be living in an alternate reality, but in this region, and under today’s circumstances, that’s a pretty fair deal. 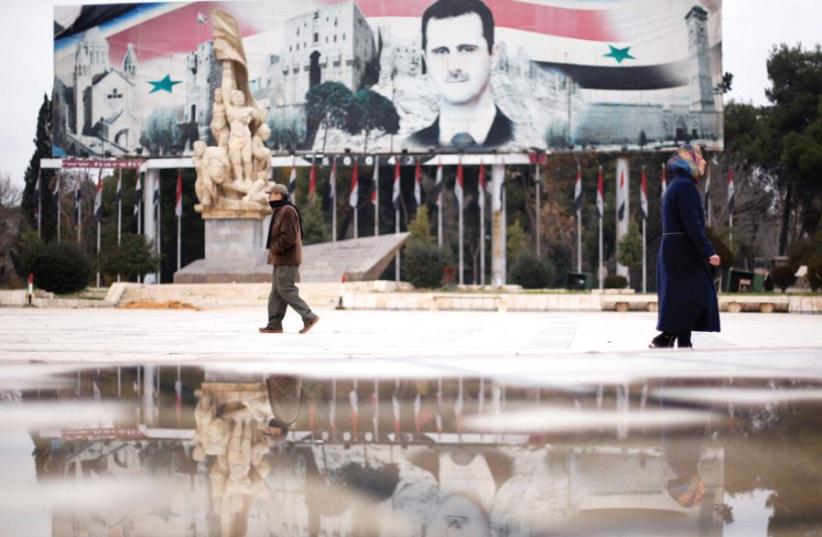 SOME PEOPLE still support him.
(photo credit: REUTERS)
Advertisement
Walking after dark in the mid-size Syrian Kurdish city, my interpreter and I approached the apartment of a local Arab family – one still proudly loyal to President Bashar Assad.Greeted at the door by an older man in a traditional Muslim cloak, we removed our shoes before proceeding to sit on the floor in the main room. A quick glance around the sparse living area quickly confirmed their political alignment: an imposing portrait of President Assad loomed over the room – and our teatime conversation.Notwithstanding that the patriarch of the family is on Damascus’ public sector payroll, they are supporters by choice. Many Kurdish doctors and teachers are on the Assad public dole, yet loyal to their own Kurdish parties. There are also substantial numbers of Arabs in areas governed by the Kurdish- led civil administration, who have joined Kurdish-led security forces and participate in Kurdish political parties.This experience with “average Joes” – or average Ahmeds, in this case – backing President Assad was the last meeting I expected to have while in Kurdish Syria. It turned out to be among the most fascinating.Prior to entering Syria, there’s an intimidating perception that the Syrian regime is much more present and powerful in the Kurdish-administered areas. While some accuse the Syrian Kurdish government of collaboration with Assad – which the Kurdish authorities categorically deny – Assad’s presence was much less overt than expected.Outside of defined locations in the relatively large cities of al-Hasakah and Qamishlo, there simply is no visible presence of Assad’s forces or politics, and it appears that they are not allowed to leave these designated zones by the Kurdish authorities, who both surround and vastly outnumber regime forces.As the tea arrived, one of the first questions by my hosts was, “Have you visited any other countries in the region?” “Turkey, Iraq, Jordan... and Palestine,” I answered, with the slightest hesitation on the last “country.” Having never left Syria, the man and his sons had many questions. It wasn’t long before those curiosities pivoted to geopolitical issues.“The Golan Heights is Syrian ground, and nobody can give it away,” my host declared, even when I mentioned that the Druse increasingly opt for Israeli citizenship, and are thankful they aren’t in the hands of extremist groups.“Hatay and Antakya must be returned, too,” added one of the sons – referencing the contested south-easternmost province of modern-day Turkey, once part of the French Mandate of Syria.Our hosts responded with chuckles of dismissal when they first heard of Minister Yoav Galant’s recent proposal for Israel to lead foreign investment and reconstruction of Syria in exchange for the Golan Heights.“The borders of Syria are sovereign,” they insisted.“And by whom were they established?” I asked.“They were determined by Britain and France, under the Sykes-Picot Agreement.”“So then why do you say that Britain and France can establish these Arab countries, but could not, at the same time, have established a legitimate territory for the Jewish People?” Silence.“But the Jews arrived to Palestine from elsewhere.”“Yes, many did,” I said, “not only from the Holocaust, but also after the Arabs expelled 850,000 of their Jewish neighbors to Israel as refugees.”“Yes, that was unfortunate, the Jews were good neighbors.”Continuing to put aside reality for another hour as I dove into the worldview of my kind hosts, we covered many other topics, including whether Americans and US President Donald Trump thought they were terrorists, and what we thought of Arab Muslim culture.At one point they asked about the old pan-Arab nationalist dream: “Do you think it’s possible for a single, unified country for the Arabs – of Lebanon, Syria, Jordan and Iraq?” “Well, since you opt for someone who does not exactly endorse democracy, I suppose anything is possible with enough force,” I replied, while gesturing toward the ominous portrait.Posing a theoretical, I asked what a reunified Syria would mean for minority rights.“The Kurds didn’t have national IDs, they couldn’t speak their language nor could they practice their culture, unfortunately. That will change when President Assad restores his influence. It’s politics.”My host’s sons were either preparing to serve in the Syrian Army, or planning to do so after completion of their education. It was notable that they never conveyed a hint of antisemitism or even a particular disdain for Israel and the United States. A mention of Iranian involvement in Syria evoked a more negative reaction.The Damascus sweets began to run low, the teapot was down to a trickle and our appetite for politics satiated.“Ahlan wa’Sahlan – you are welcome as family,” my hosts said as we exchanged parting greetings and kisses on the cheeks.While they are prepared to fight to defend or take back “Syrian ground,” they were at least hospitable, warm people that you could have honest disagreements and lively discussion with.I held my ground, even if they weren’t willing to give up theirs.They may be living in an alternate reality, but in this region, and under today’s circumstances, that’s a pretty fair deal.The author is a Kurdish affairs analyst, who resides part-time in the Kurdistan region.