Society is looking the wrong way, worrying about what women wear, rather than about what men think. 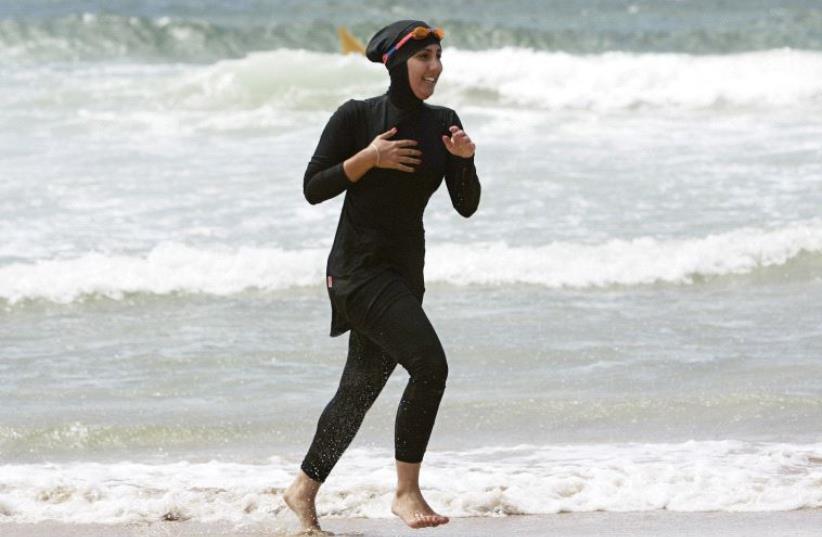 The burkini is under fire in France.
(photo credit: REUTERS)
Advertisement
In 1925, women who wanted to go to swim at West Palm Beach in Florida were subjected to police “measurements” for the offense of wearing “abbreviated bathing costumes.” It was part of a network of local laws across the US that sought to ensure women were covered down to the knees at the beach. Just over 90 years later women in France are being banned from beaches in France for wearing the same swimsuits that were mandated on beaches in the 1920s. Those wearing “burkinis” have been told they are unwelcome in Cannes, Villeneuve-Loubet and Sisco.The excuse behind the ban has been that the “burkini” (a portmanteau of “burka” and “bikini”) is a “uniform, a symbol of Islamist extremism,” as the mayor of Cannes told reporters. He also claimed it was “not respectful of good morals and secularism.” According to the mayor, only women showing enough skin are “moral.”The decision to ban burkinis effectively sequesters those Muslim women who want to maintain a degree of modesty at the beach. This is ironic because it removes women from public view who are already seen as being “suppressed” by their religion for having covered their hair and body. Consider the logic: society thinks that Muslim women wearing the kind of outfits normal in Muslim countries, such as hijabs, chadors, abbays, niqabs and burkas, is a symbol of Islamification. The solution? Remove the women from public view.How does that combat Islamist extremism? In countries dominated by Islamist theocrats, such as Saudi Arabia and Iran, the state already forces women to cover themselves and often forbids them entry to some public areas, such as sporting events. In many parts of the Muslim world women find it difficult to swim in public pools or at public beaches. When they do go swimming they often wear the same long, often black, garments that they wear on the street. At the same time men bathe and dress as they please. Boys and teens frolic in the surf in the same swimming suits people wear in the West, and their sisters watch from the shore.Why is the law and society’s obsessive gaze always directed at women? Why does it always fall on them to shoulder the burden? It is not an uncommon sight in international airports in the West and Middle East to see a man with shorts and a T-shirt walking with a Muslim woman dressed all in black, with just a slit for her eyes.It’s all about how the woman dresses. And it’s not just the Muslim world; not so long ago America was obsessed with women’s beach attire. In China women’s feet were once bound. It’s all about control and forcing all the problems of “morality” onto women and their behavior.Rather than enforcing anti-burkini dress codes, beaches should be enforcing codes against how men dress and act.For instance why are men allowed on beaches wearing a Speedo-style swimsuit that leaves little to the imagination, or baggy jeans, or their boxer shorts? Why are men on beaches allowed to harass women, shout and get drunk? Why not ban the men who are so obsessed with how women dress? One could go further than that. If society believes women are being “forced” to wear burkinis or bathe in their abbayas, then beaches could force men to wear the same outfit. Why ban burkinis, when one can just ban the men who are bothered by them, or ban the men who tell their sisters that they can’t swim but who then frolic in the waves in their shorts. Put the men in burkas, put them in burkinis, that would be a more reasonable decision.However no society would dare to regulate how men dress.The burkini has little to do with extremism; it is likely worn by women who are not from the most strictly religious families, because it’s form fitting and thus already too “immodest” for them. The idiotic idea of banning burkas or burkinis from public view attacks only a visible symbol, rather than the root of Islamist extremism.Whereas swimwear and burkas are not dangerous, the ideas spread by men like Anjem Choudary have been shown to be a real threat by courts in the UK. The British cleric was recently convicted of “inviting others to support Islamic State,” the BBC reported. “The evidence now shows that Anjem Choudary is one of the most dangerous men in Britain. Not a bomb-maker. Not a facilitator.But an ideologue, a thinker, who encouraged others not to stop and think for themselves before they turned to violence to implement their shared worldview.” The Telegraph claimed he had “links to 500 ISIS Jihadists.”What people should be banning from the public sphere is extremist ideas. What Europe should have banned are the 5,000 EU citizens who joined ISIS and went to Iraq and Syria and committed genocide. They should have banned them from traveling and prosecuted them for war crimes. Instead Denmark gave returning Jihadis gym memberships. So ISIS murderers can get welcomed back to Europe and get to work out at the gym, but women in burkinis are a threat? Officials are too busy poking around the burkini to bother to stop men who went to Iraq, murdered Yazidi minorities, blew up ancient cultural sites, raped women and sold people into slavery.It would be preferable to have everyone in burkinis, all the time, than to have one genocidal ISIS fanatic killing innocent people. But society is looking the wrong way.Worrying about what women wear, rather than about what men think. If you want to fight bigoted, genocidal religious extremism, you need to concentrate on the ideologies behind groups like ISIS, not some headscarves in the classroom.