Will the audience in Atlanta understand that we have a Palestinian physician and a Jewish grandmother who have bonded and created an extraordinary friendship over the worst possible circumstance? 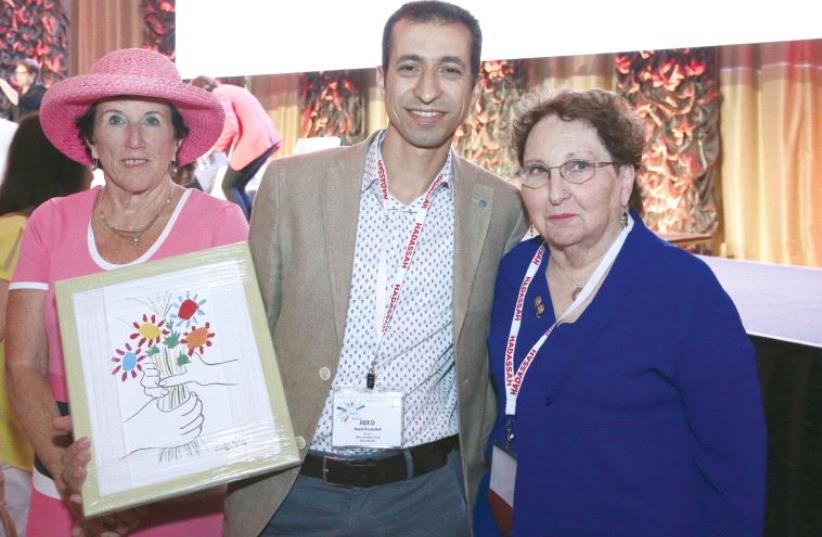 The author (left) with Dr. Abed Khalaileh and Karen Lakin
(photo credit: Courtesy)
Advertisement
Buses played a role in the life and death of Richard Lakin.As a student at Boston University, he and his girlfriend (soon to be his wife) Karen Gordon rode in the South on Freedom Rider buses to protest segregation. Some of the buses were firebombed. Later, as a school principal in Glastonbury, Connecticut, he initiated the busing of black kids from deprived neighborhoods to his mostly white school. In his adopted home of Jerusalem, where he and Karen became star English teachers with highly motivated Jewish and Arab students, he preferred to walk rather than take the bus. But on October 13, 2015, a so-called “wave of terrorism” was rolling over Jerusalem, and he thought it unwise to walk on the Talpiot Promenade for a routine doctor’s appointment. He took a No. 78 bus.So relates Karen Gordon Lakin at the Hadassah National Convention in Atlanta, where the Freedom Rides and the busing are documented nearby in the Martin Luther King, Jr. National Historic Site. Richard and Karen started Camp King after King’s assassination in 1968 at age 39.Sharing the stage with her is Dr. Abed Khalaileh, a surgeon who grew up in the Jerusalem neighborhood of Jebl Mukaber.I am the moderator.Usually at Hadassah conventions we present more straightforward stories.Indeed, this year’s programs have included the cases of Tahel, a toddler firebombed in her car seat; of Dekel, a jazz musician thrown from his motorcycle at the Dead Sea; Liana, a young woman from Brooklyn, trapped under the wheel of a Jerusalem tourist bus. Heroic rescues with thankfully happy endings.But this is a different story. Soon after boarding the bus, two terrorists shot, stabbed and slashed Richard Lakin.Khalaileh’s specialty is transplants, but, like all surgeons, he becomes part of the emergency effort when a victim of terrorism arrives. Lakin went straight to surgery.For Khalaileh – who, in addition to training in Israel, has trained in Russia, France, Turkey and the US – the damage to the still unidentified patient was among the worst he’d ever seen. The knife was lodged inside.The team would be contending with blood loss and sepsis and a gun wound in the head. That is what he told Karen Lakin, who had come to Hadassah University Medical Center when Richard didn’t answer his phone and she had identified his clothing.Khalaileh was the family contact: the youthful-looking surgeon who drew the sketches for them to tell her about how they were caring for Richard.“We understood that Richard’s chances were only 15 percent if he were a young and healthy 21-year-old,” said Karen. Twenty-one years old, like Bilal Abu Ghanem, the terrorist. He was in the same Intensive Care Unit.While the Lakin family sat in the hospital, the family was infuriated to find on social media a reenactment of the bus attack with instructions to other potential terrorists on how to maximize the slaughter. They have since become activists against incitement on social media.Among those who joined the Lakins in their long good-bye to Richard was United Nations Secretary-General Ban Ki-moon, to whom they appealed to further their campaign.Khalaileh wasn’t at the hospital the day, two weeks after the attack, that Richard Lakin died. A colleague phoned him with the sad news.Khalaileh told the audience, “I felt terrible. I thought I might go to make a shiva call to the family, but I was ambivalent. Would I give them comfort or pain? My wife encouraged me to follow my heart and go.”The door was open, and Khalaileh walked in, nervous, his own heart pounding.Shouts of happy surprise greeted him.He was enclosed in warm embraces.“If you can talk about a highlight of a shiva, this was it,” said Karen Lakin. “He was so kind. We were grateful to have had the time to part from Richard.”This is the story I need to share – not a typical happy-ending story but one that is nevertheless hopeful.Will the audience in Atlanta understand that Khalaileh’s first name is Abed, that his mother tongue is Arabic, that he lives in Jebl Mukaber, that on stage we have a Palestinian physician and a Jewish grandmother who have bonded and created an extraordinary friendship over the worst possible circumstance? I cannot be more explicit.Khalaileh told The New York Times after the funeral. “When I talked to the family, I had tears in my eyes – this is a man and he didn’t do anything. What did he do to deserve such a punishment?” In a rare reference to his ethnicity, he said, “I am not political here, my goal is not to judge, and I try to disconnect. But still, you live with a sensation that isn’t good, that after all, the person who carried out this attack is from your people.”Abu Ghanem, who is serving three life sentences plus 60 years, is from Jebl Mukaber. In this case, it is not just from Khalaileh’s people that the murderer came. Abu Ghanem and Khalaileh are from the same neighborhood.On stage Karen Lakin and Abed Khalaileh embrace and a thousand women and men rise to their feet.