For a Boston Red Sox fan, walking into Fenway is like arriving in Shangri-La. 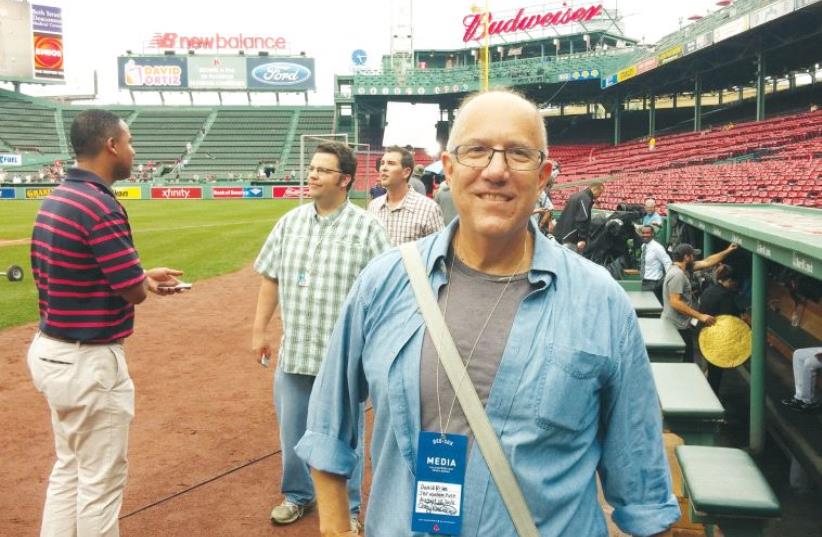 The writer on the storied ground of Fenway Park
(photo credit: Courtesy)
Advertisement
The vivid technicolor of manicured grass and infield dirt, the towering presence of the “Green Monster,” the excited chatter of 35,000 fans, and the carnival-like smells of fast-food heaven.For a Boston Red Sox fan, walking into Fenway is like arriving in Shangri-La.It’s a scene that I grew accustomed to over the course of 25 years living in Maine and Boston, and attending at least a couple of baseball games a season. But what made this game against the New York Yankees earlier this month beyond special was that, for the first time in a lifetime of passionately rooting for the BoSox, I took in all those pre-game sights and sounds not from the stands, but from the field.Thanks to an old high school friend who’s now a professional baseball writer for ESPN (and what some apparently see as impressive credentials as an editor at Israel’s leading daily newspaper), I was able to snag pre-game field access and gametime press box (and dining room) access during the recent Sox-Yankees series.There’s that cliché about being as happy as a kid in a candy shop, but it really should apply to adults in ball parks too. Loitering in front of the Red Sox dugout, rubbing shoulders with stars like Mookie Betts and David Ortiz (not that I would ever deign to talk to them), and hearing the thunderous crack of batting practice from a few yards away were just a few of the vibrant delights that had me pinching myself.It was a far cry from the first Red Sox game I attended at age nine with my father in the summer of 1967, the improbable season that became immortalized as the “Impossible Dream” – the Sox winning their first pennant in 21 years! I didn’t care that we were up in the left field grandstands – the game, the team and the stadium had hooked me.At that tender age amid my sheltered New England upbringing, Israel meant nothing to me. I couldn’t have explained anything about the Six Day War that took place a couple of months before, but I could reel off the batting averages and hitting stats of Rico Petrocelli, Carl Yastrzemski and George Scott with precise accuracy.AS THE years went past and my Sox obsession grew, I filled scrapbooks with the daily reports of the games, and never used to miss a game on TV. I would stand in front of the set in the kitchen holding a bat and mimicking each batter, providing them that indirect edge with my superpowers.When they would do poorly and my older brother would tease me, I would fly into a rage and try to tackle him – but with the foresight to put the bat aside first.With maturity, my fandom became more even-tempered, through the ups of 1975 and downs of 1978 and every season before and after. Firmly ensconced in Israel by 1986, I was thankfully spared the play-by-play low moment of the World Series travesty against the New York Mets (Bill Buckner!). The ensuing years have seen me transition from an engaged fan to an outside spectator, passively following even their first World Series championship since 1918 in 2004, with repeat performances in 2007 and 2013.Sure, I was elated for the team and for Red Sox Nation, but the distance, a change in priorities of adulthood (I did learn a little more about the Six Day War), and the realization that standing in front of a TV waving a bat wasn’t actually going to make a difference, had tempered both the loyalties and interests. The rabid Sox fan had turned into a casual observer.BUT AS soon as I stepped on the field this month, that fan returned from his hiatus.And by the time I stepped out of the 5th-floor elevator and entered the press box overlooking home plate, it was like the summer of 1967 all over again. Only this time there were a few dozen sportswriters surrounding me, all busy pounding away on laptops even before the game had started.They pretty much ignored me, but I introduced myself to a friendly columnist for the Boston Herald, who pointed out an empty seat next to him. We watched the game from this most amazing vantage point, so close that when Ortiz fouled a ball off his shin, you could hear his expletive loud and clear.The first couple of times a Sox player made a good play or a rally was in the offing, I did what most fans do – clapped or shouted out support. Until I realized that nobody else in the press box – these jaded professionals who attend over 100 games a year and are expected to churn out reams of copy on deadline – were making any noise or reacting to plays in any way.I shut up, loaded up on the ice-cream bar in the press dining room, and watched the rest of the game – which turned out to be a rather tedious affair lasting over four hours, with numerous pitching changes – in silence. Ironically, there wasn’t much to cheer about as the Yankees eventually blew out their arch rivals. But it barely diminished the joy and sense of wonder at being so close to an operation that had been a part of my life for so long.That wonder has been tarnished over the years living in Israel, amid the realization that the life-and-death issues we face on a regular basis put the balls and strikes and wins and losses in their proper perspective. But for one magical night, life and death took a welcome back seat.Even late in the game, when my jetlagged eyes were closing and I yearned for the inviting hotel bed, I knew that I would be crazy to leave early. You never know when the Red Sox could explode… if only I could get a bat, stand up next to my seat and give them a helping hand.

The writer is the managing editor of The Jerusalem Post. He is the co-author of Goodbye Parkinson’s, Hello Life. http://divineartsmedia.com/