The Palestinians must acknowledge their role in the Holocaust - opinion

Palestinian historical revisionism includes the contention that the Palestinians are themselves Holocaust victims.

By MARK REGEV
EGYPTIAN PRESIDENT Abdel Fattah al-Sisi looks on in the Alamein Military Museum during a ceremony in 2017 to mark 75 years since the pivotal WWII battle in the town of El Alamein, west of Alexandria.
(photo credit: Egyptian Presidency/Reuters)
Advertisement

Most Israelis are unaware that November 11 is a highly significant day in their history. On that date in 1942 at El Alamein in the North African desert, the German blitzkrieg into the Middle East was finally halted, with British General Bernard “Monty” Montgomery defeating Erwin Rommel’s Afrika Korps in an Allied victory that ended the existential threat the advancing Nazis armies posed to the Jews of Mandatory Palestine.

For Winston Churchill, El Alamein was a pivotal moment. Following all too many Dunkirk-like “glorious defeats,” the much-criticized British Army finally had a decisive victory over the Wehrmacht. For the first time since the beginning of the Second World War, Churchill ordered church bells rung across the United Kingdom in celebration of this long-awaited triumph of Allied arms.

If for the British El Alamein was a much-needed victory, for the Jews living under the mandate it was salvation. Had the Axis military advance not been stopped in Egypt, Sinai and Mandatory Palestine would have been next, and there can be little doubt what Nazi occupation would have meant for the half a million Jews living here.

Every year on Holocaust Remembrance Day, memorial ceremonies are held across this country in which Israelis remember the “six million Jews murdered in the Holocaust by Nazi Germany and its collaborators.” The last three words in the official liturgy are significant, as the importance of the role played by non-Germans in the Holocaust has been documented by historians who have studied the connection between levels of collaboration and the scope of the murder.

In German-occupied territories where the populace was either supportive of the genocide or indifferent to the fate of their Jewish neighbors, such as occupied Ukraine and the Baltic states, the destruction of the Jews was often near total. By contrast, in occupied territories where the population actively assisted the local Jewish community, the breadth and depth of the destruction tended to be more limited. Denmark and Bulgaria stand out in this category – examples of countries where efforts by local elites and the general populace helped save a substantial section of the Jewish community. 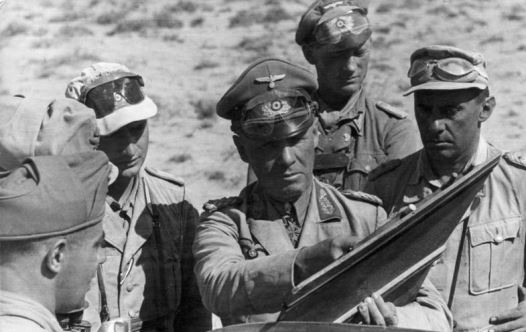 Had Rommel been victorious at El Alamein and had the Wehrmacht reached Mandatory Palestine, in which category would the Arab Palestinians have fallen? Would they have been like Danes and Bulgarians and acted to save Jews, or more like the Latvians and Ukrainians who, with notable exceptions, collaborated in the genocide?

The available data point in a clear direction. While there would undeniably have been Palestinian Righteous Among the Nations willing to risk their lives to save Jews, there can be little doubt that upon occupying Mandatory Palestine the Germans would have found a collaborationist leadership eager to enlist the local population in the mass killing of the Jews.

At the time, Amin al-Husseini, grand mufti of Jerusalem from 1921, president of the Supreme Muslim Council from 1922 and president of the Arab Higher Committee from 1936, was the pivotal figure in the Palestinian national movement and his views were no secret. He was a hardcore antisemite and an infamous Nazi collaborator.

Following Hitler’s rise to power, Husseini, along with fellow Arab Palestinian nationalists, conducted a successful campaign to pressure the British to keep the gates of Mandatory Palestine all but closed to European Jews fleeing the Nazis, and in so doing, sealed their fate.

After the outbreak of the Second World War, Husseini helped orchestrate the April 1941 pro-Nazi Rashid Ali coup in Iraq and the subsequent Farhud massacre of Baghdadi Jews. When the British retook the Iraqi capital, Husseini relocated to Berlin where he remained until the German defeat, becoming Hitler’s most outspoken Arab advocate, broadcasting Nazi propaganda to the Middle East while recruiting Bosnian Muslims to the Waffen-SS.

Husseini knew of the “Final Solution” and supported the genocide. From Husseini’s perspective, it was better to murder a million and a half Jewish children than to have those children immigrate to Mandatory Palestine. Following the collapse of Nazi Germany in 1945, Husseini fled Europe for Cairo to escape international prosecution for war crimes.

Symptomatic of the prevailing attitudes in Palestinian politics, and notwithstanding Husseini’s much deserved notoriety, he was nevertheless elected president of the All-Palestine Government in September 1948.

CONSIDERING HUSSEINI’S shameful war record in the absence of a German occupation of Mandatory Palestine, there can be little doubt what it would have included had Hitler’s armies reached the Holy Land. The Führer would have been keen to exploit Husseini’s leadership of the Palestinians, dispatching him to Jerusalem to head a collaborationist administration dedicated to working with the Nazis on “solving the Jewish problem.” Together, they would have been highly effective in doing so, with the Palmah’s plans to wage a Tito-style guerrilla war against the Germans from the Carmel mountains having only symbolic importance, with no realistic possibility of preventing genocide.

Sadly, today in the Palestinian Authority, Amin al-Husseini remains a respected figure, an honored founding father of the national struggle. Far from critically confronting evidence of wartime collaboration, Palestinians choose to pervert history. President Mahmoud Abbas speaking before the Palestinian National Council in 2018 asserted that the Holocaust was caused by the Jews’ “social behavior, [charging] interest and financial matters.” Abbas dedicated his 1982 doctoral thesis and a 1984 book to the mendacious proposition that Zionists collaborated with the Nazis. (Former London mayor Ken Livingstone was suspended from Britain’s Labour Party in 2016 for regurgitating this argument.)

Palestinian historical revisionism also includes the contention that the Palestinians are themselves Holocaust victims, claiming that they were forced to pay for Europe’s crimes, losing their homeland so that the West could atone for its sins against the Jews.

In 2019, Democratic Congresswoman Rashida Tlaib, herself of Palestinian heritage, seemed to endorse this tortuous argument when she stated that “it was my ancestors – Palestinians – who lost their land and some lost their lives, their livelihood, their human dignity, their existence... in the name of trying to create a safe haven for Jews,” conveniently omitting the Palestinian leadership’s behavior during those fateful years.

Germany’s post-war integration into Europe was predicated upon taking full responsibility for its wartime actions. Across Europe, East and West, nations condemn those of their citizens who collaborated with Nazi antisemitic policies. It is high time the Palestinians did the same.

Maybe the European Union’s representatives to the Palestinian Authority should encourage them to do so. For without such an unequivocal official repudiation of Amin al-Husseini’s legacy, doubts will endure as to the current Palestinian leadership’s character, doubts that affect present-day Israeli deliberations.

The writer is a former adviser to the prime minister and currently a senior visiting fellow at the INSS. Follow him at @MarkRegev on Twitter.