The two-state solution is finished

So which parties are still supporting a two-state solution? The Joint List, Meretz and, ironically, Likud. 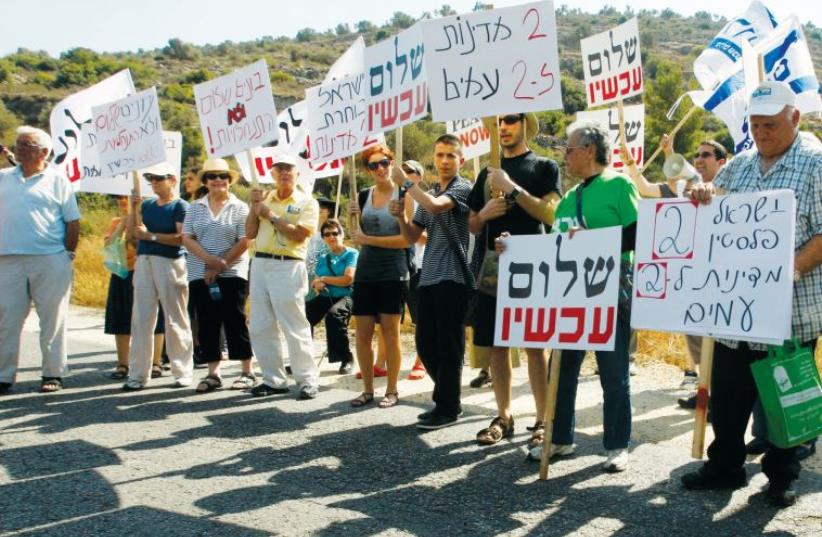 Peace Now activists hold a protest in Jerusalem
(photo credit: REUTERS)
Advertisement
The three parties necessary to complete a deal – the Israelis, the Palestinians and the international community – have all moved on.German Chancellor Angela Merkel, in a joint press conference with Prime Minister Benjamin Netanyahu Tuesday, declared that now is not the time for major progress toward a Palestinian state. She called instead for small steps to safeguard a future two-state solution to the Israeli-Palestinian conflict.Merkel’s statements reflect the recent movement of the international community from pushing for an immediate twostate solution. Makor Rishon’s Ariel Kahana reported Friday that senior Western diplomats representing powers on two different continents recently visited Israel and said in closed informal meetings held with Israeli colleagues that they believe that the establishment of a Palestinian state is not feasible for the foreseeable future.Palestinian Authority President Mahmoud Abbas is in his eleventh year of a four-year term. Israel cannot be expected to sign a deal with a president who is no longer the true representative of the Palestinian people and, more importantly, would not have the ability to implement it.On an official visit in Japan with Abbas, PA Foreign Minister Riyad Malki said Monday that “we will never go back and sit again in direct Israeli-Palestinian negotiations.”He went on to warn that without international involvement, a vacuum will be left that may end up filled by Islamic State. Presumably no one is pushing for elections because they agree with Malki’s assessment that whoever comes next will be worse.Defense Minister Moshe Ya’alon said earlier this month that the Palestinians cannot survive a day without security coordination with Israel and that Israel does 80 percent of the work when it comes to preventing a Hamas and Islamic Jihad takeover of the West Bank. When Malki justified the recent terrorist attacks against Israel, saying “they decide to sacrifice their lives even at the age of 15... for the better lives of the rest of the Palestinians,” it reinforced the point that the PA is more interested in pandering to extremist elements than fighting them.So if the two-state solution is over, what comes next? For the Israelis the idea of a unilateral solution has replaced attempts at final-status direct negotiations with the Palestinians.This is a position shared by party leaders on the Right, Center and now Left.On the right, Bayit Yehudi leader Naftali Bennett, who publicly opposes a Palestinian state, has been pushing his non-final-status unilateral Stability Initiative since his first campaign for office in 2012. In an interview this week he said, “We have de facto separated from the Palestinians. They rule themselves. We should do two things. One is to create autonomy on steroids for the Palestinians in areas A and B; and in area C to begin, in stages, the application of Israeli sovereignty. Let’s start with Gush Etzion.We need to start advancing this.” Yisrael Beytenu’s Avigdor Liberman has a plan that would unilaterally move Israeli-Arab territory to a Palestinian state in exchange for settlement blocs, with Arabs potentially losing their Israeli citizenship.In the Center-Left bloc the idea is for Israel to implement a unilateral final-status solution with the backing of the international community. The idea, which was promoted in the previous Knesset by Amos Yadlin from the INSS think tank, is to separate from the Palestinians and determine official borders without the Palestinians present at the table. The support for a shift from peace to separation in Center-Left circles has grown as politicians gradually adopted it. Kulanu’s Moshe Kahlon said during his election campaign that there is “no point to negotiations at the moment because there is no partner.” Kahlon placed Michael Oren, who has suggested the unilateral separation route in the past as a final-status solution, as the foreign policy expert of his Knesset list. After the formation of the current government Yesh Atid’s Yair Lapid found himself in the opposition and shortly after started called for a unilateral separation plan.Zionist Union leader Isaac Herzog went as far as convincing the Labor Party to vote for freezing the two-state solution and adopting his unilateral separation plan. Herzog is now shopping his plan around the international community and informed US Ambassador to the United Nations Samantha Power on Sunday that “the United States needs to adopt a change in direction for solving the Israeli-Palestinian conflict.”So which parties are still supporting a two-state solution? The Joint List, Meretz and, ironically, Likud.The Prime Minister’s Office responded to Malki’s statement against direct negotiations, saying “Israel knows peace will be achieved by direct negotiations. It seems the Palestinians know that as well, and that is why they do not want direct negotiations.”The Palestinian leadership is no longer interested in talking to the Israelis, and most Israeli leaders have given up on talking to the Palestinians. Israelis are now looking for a unilateral solution to either annex land in the interim or determine their borders in a final status agreement, and the international community has decided “that now is not the time for major progress” on the issue.Of course there are those who have not given up on pushing for an immediate two-state solution, such as the French, the Swedes and Netanyahu. On all three sides there are enough people who share a genuine desire to one day revisit the two-state solution. However, after so many years of trying, the Palestinians are once again choosing violence, the Israelis have had enough and the international community is frustrated and tired of trying. Albert Einstein defined insanity as “doing the same thing over and over again and expecting different results.”The idea of the two-state solution is finished.The author is Bayit Yehudi’s Anglo Forum chairman, director of the Mevaseret Zion party branch and sits on the city council’s defense, advancing the status of women, and immigration & absorption committees.