"Our children can’t (or won’t) marry each other, we don’t eat in each other’s homes and we fight repeatedly to preserve a long irrelevant status quo." 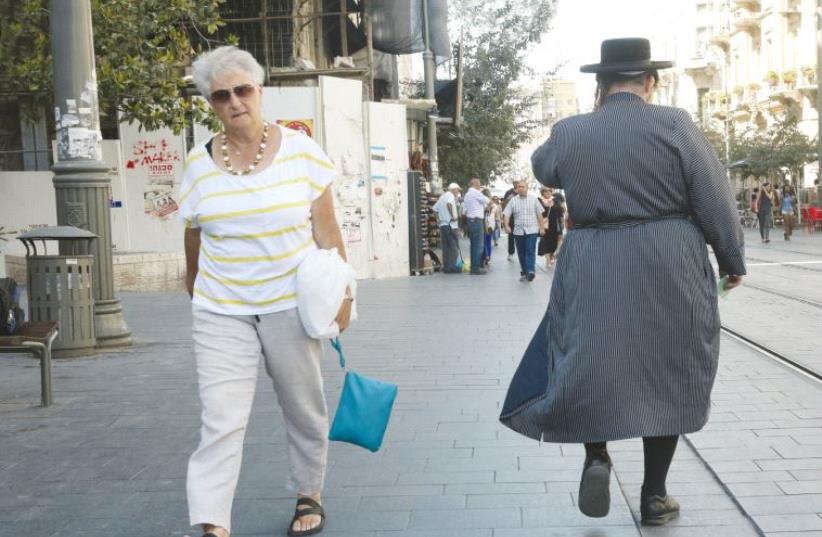 Jerusalem street
(photo credit: MARC ISRAEL SELLEM)
Advertisement
When Prime Minister Benjamin Netanyahu buckled under haredi (ultra-Orthodox) pressure in September and canceled 20 long standing Israel Railways permits to do regularly scheduled repair work on Shabbat (leading to the cancellation of train service the following Sunday morning that inconvenienced tens of thousands of commuters and soldiers), he probably wasn’t thinking it would reignite Israel’s long simmering Shabbat wars.But no sooner had the emboldened ultra-Orthodox parties internalized the bounty they’d unexpectedly received, the ante was upped. Next on Interior Minister and Shas leader Arye Deri’s agenda: the shutdown of grocery stores and kiosks in the heart of secular Tel Aviv.The response was quick in coming: threats by the Be Free Israel group to stage a massive secular street party on Shabbat in haredi Bnei Brak.The party never happened and the kiosks are still open. But it got me lamenting how we got to this point. Not the historical circumstances.While prime minister David Ben-Gurion’s decision to create the now sacrosanct “Status Quo of State and Religion” seems, in retrospect, to have been a shortsighted political calculation, in 1947 Ben-Gurion was simply being prudent in ensuring that every major Jewish community, including the religious parties, would support Jewish statehood.No, my quibble is with the notion that, for Jews of different backgrounds to get along, we need to settle on a kind of “lowest common denominator” of observance. That is, the most stringent approach to religious behavior becomes the one that’s adopted so that everyone can be together.It plays itself out on the national stage of course: the absence of public transportation on Shabbat in most Israeli municipalities, the monopoly the Israeli Rabbinate has on kosher certification, Orthodox control over marriage and conversion.But you can see it within families as well, where differing standards of kashrut mean not everyone can share a Shabbat meal, because the meat and vegetables from Rami Levy, while 100 percent kosher, aren’t strict enough for all.What if it didn’t have to be this way? Could we instead imagine a Jewish world in which striving to always reach for the lowest common denominator is not the only way for Jews to get along? A world where differing practices are embraced – not with resentment, but with joy and openness. A world in which we replace “tolerance” – which linguistically suggests that one is only begrudgingly “tolerating” something – with something closer to true coexistence.What would such a world look like? First of all, we’ve got to stop with the Shabbat protests – on both sides. If a kiosk wants to sell milk on the holy Sabbath, let it. If Bnei Brak doesn’t want buses running down Jabotinsky Street on the weekend, that can be accommodated too. But let’s permit public transportation in those locations where the majority demands it.Civil marriage is a must. Already one out of every five Jewish Israeli couples does not go through the Chief Rabbinate.And, according to new figures published by the Central Bureau of Statistics, the number of couples choosing to live together rather than get hitched legally has increased 29% in the last two years. When it comes to weddings, the lowest common denominator is already broken.As for the railway repairs on Shabbat that fueled the latest controversy, Orthodox maverick Rabbi Dr. Nathan Lopes Cardozo writes that, “There is only one sanctity that is even greater than Shabbat and that is the holiness of the human being. If it is true that improving Israel’s train system will save countless human lives by having people switch from car to rail, halacha [Jewish Law] will, without any doubt, demand of us to work on Shabbat to complete construction as soon as possible.”Prof. Yeshayahu Leibowitz said something similar some 40 years ago.Religious Jews should regard meeting the essential 24/7 needs of the modern state – services like water, electricity and policing – as a full religious obligation.To ask to be exempt from work on Shabbat was unthinkable to Leibowitz and would actually confer upon the religious Jew the stigma of an “inferior” status.The haredim would argue that opening a supermarket on Shabbat is not an essential service and a Jewish world that doesn’t rely on lowest common denominators would lead to a total disintegration of Jewish unity.The thing is, we’re not unified now.Our children can’t (or won’t) marry each other, we don’t eat in each other’s homes, and we fight repeatedly to preserve a long irrelevant status quo.This is not an easy one to solve and there is little political will to legislate the changes that would effectively separate religion and state.But as Jerusalem Post editor Yaakov Katz argued in a recent column, such a dramatic shift could actually benefit the religious parties. The next time railway construction takes place on Shabbat, haredi politicians “would be able to tell their constituents that they had no hand in the matter,” Katz wrote, and would therefore “not be pressured to topple a government over religious issues.”It’s time for a reboot of the conceptual arithmetic that has defined religious- secular relations in this country over the past 70 years. As we sit in our succot next week, let’s think long and hard about what kind of a country we want – before the next Shabbat wars become the only lowest common denominator on which we can all agree.The author is a freelance writer who specializes in technology, startups and the entrepreneurs behind them. More at www.bluminteractivemedia.com.