This normal life: Why live in Israel?

It’s time to get our own house in order and there’s so much to do. 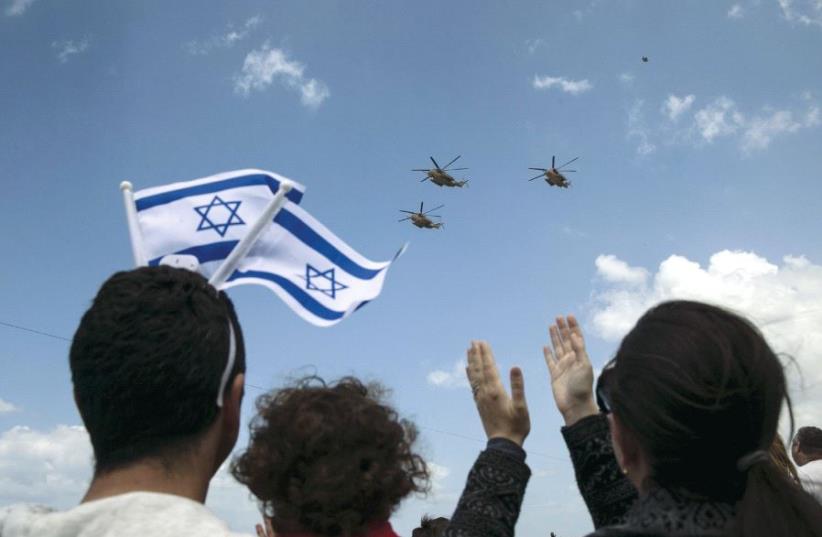 Independance Day flyover
(photo credit: REUTERS)
Advertisement
Why do Jews live in Israel? That was the question Jerusalem Post editor Yaakov Katz asked in his Friday column two weeks ago. With Yom Ha’atzmaut just around the corner, it’s a question we should all be asking ourselves.Katz sets up – and then deconstructs – two answers popular in recent years with Israeli hasbara mavens: Israel as the Start-up Nation, and Israel as a Light unto the Nations engaged in tikkun olam – doing good around the world.The hi-tech narrative is an easy one – especially for me, since I write about start-ups for a living. Israel is a worthwhile place to live, Katz writes, because of “the amazing innovation that originates in the Jewish State.”That’s certainly true: Israel has more companies listed on the NASDAQ stock exchange than do India, Japan and Korea combined, has more venture capital investment per capita than anywhere else in the world, and is No. 1 in the rate of per capita R&D spending.The results of this hi-tech culture are manifest, including global market leaders such as Teva Pharmaceuticals, Check Point Software Technologies, and Mobileye, whose hugely successful IPO and subsequent $15 billion sale to Intel were among the biggest in Israeli hi-tech history. Just about every major international tech company – Microsoft, Google, Cisco, Motorola, Apple, eBay, PayPal, Facebook – has an office in Israel.The other story – tikkun olam – is equally compelling.“Israel is a state you should support,” Katz writes, “because it treats wounded Syrians and developed the most innovative drip irrigation used to grow crops in places like India and Rwanda.”Israel sends rescue teams to Haiti, Turkey, Nepal and wherever natural disasters hit. Our water desalination prowess, writes Seth Siegel in his book Let There Be Water, is a “solution for a water-starved world.” Israeli scientists are international experts in smoking out the medical benefits of marijuana.But there is a problem with both the Start-up Nation and tikkun olam narratives, Katz points out. They are “generic stories… that could apply to any other people in the world.”Katz understands why these depictions are so popular.“Israel, especially for the last 30 years or so, has become a divisive topic,” he explains. Tikkun olam and Start-up Nation, by contrast, “can connect youth to Israel and potentially give them a reason to be Zionists. [But] while that is commendable, it cannot be the bottom line.”The Jewish people did not return to Israel out of a desire to bring life-saving technology to Africa or the opportunities to receive venture capital funding. Rather, “those inventions were made possible exactly because Jews live as a free people in their historical homeland,” Katz writes.That’s a good answer, but it’s not enough, either. Because it says why we came but not why we ought to stay (at least for those who have a choice to leave or the one-third of Israelis who tell pollsters they’d consider emigrating).If we’re honest about Israel, this country has significant problems: violence and crime, xenophobia and racism, ongoing terrorism, government corruption, an enormous gap between rich and poor, high taxes, crippling bureaucracy, religious coercion, and rising road fatalities. I could go on, but let’s stop, because our reason for being here, as Jews, is actually very simple. It’s to make things better.The re-establishment of the State of Israel after so many years is truly a historic, once-in-millennia opportunity. But what kind of Israel will it be? An egalitarian nation of equal rights and wise policies; of superior education and a population that is gracious and loving to one another? Or something darker? Right now, we’ve got both – the good and the bad (and a lot of gray in between). Our job is to do our small part to push Israel towards the light. To make this a place worth living in – and to give Jews outside Israel a reason to keep coming, whether as tourists or on aliya, like we did more than 20 years ago.Can one person really make a difference? The answer here is an emphatic yes. That smile you gave to a stranger, or the person you made room for on the highway, reverberates in ways you can never fully track. Your vote for a particular party can result in political changes that impact millions.When our family lived in the US, I never felt that any individual action I made had much of an influence. Here people and issues are so close, it really does. And if it’s not me, let the revolution come from my children (and their children), who I hope I have raised with the kind of values and interpersonal behavior that will result in Israel becoming a better place to grow and thrive.It’s time to get our own house in order and there’s so much to do. It won’t be easy, it will frequently be messy, and the obstacles will often seem insurmountable. But we have to try.Yes, we should continue to innovate and do even more tikkun olam, but the real answer to the Yom Ha’atzmaut question – why do Jews live in Israel? – is to actively engage in the greatest Jewish experiment of the modern era: figuring out together what type of civil and religious society we want to build – and then going out and doing it.How could I not want to be a part of that? The author is a freelance writer who specializes in technology, start-ups and the entrepreneurs behind them. www.bluminteractivemedia.com