Time for regime change in Iran

"We should empower Iran’s democratic opposition to topple the regime." 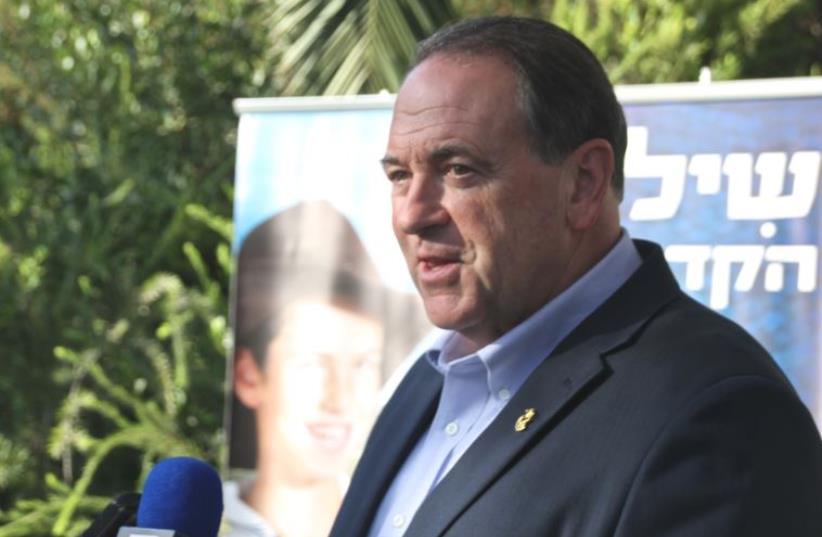 US Republican presidential candidate Mike Huckabee speaks in Shilo
(photo credit: TOVAH LAZAROFF)
Advertisement
When I visited Israel in 1973, the first of dozens of trips I’ve taken to the Jewish state, the United States and Iran stood united against the enemies of Israel.Few anticipated that just six years later, a revolution would transform Iran into an Islamic theocracy and the world’s most dangerous sponsor of terrorism.This week as I returned to Israel to meet with Prime Minister Benjamin Netanyahu and other key Israeli leaders, it’s clear that Iran is ripe for another revolution. This time, with US support, Iran’s democratic opposition could topple the Islamic Republic and put an end to the ayatollahs’ threats to “wipe Israel off the map” and bring “death to America.”The Iranian regime lost the confidence and support of its own people long ago. During the Green Revolution of 2009, the Islamic Republic faced the greatest threat of its 30-year existence at the hands of its own people.Hoping for a nuclear deal with the ayatollahs, however, president Obama and then-secretary of state Hillary Clinton shamefully left these peaceful protesters without so much as a word of encouragement, and they were killed in the streets.In its desperation for a deal, the Obama administration has showered the Iranian regime with diplomatic handouts. Sanctions relief has injected $150 billion into Iran’s economy and military. These efforts have not resolved the nuclear crisis; they have exacerbated it by legitimizing and arming a terrorist state hell-bent on acquiring weapons of mass destruction.Prime Minister Benjamin Netanyahu has said that the ayatollahs “deny the Holocaust while planning another genocide against our people.” He is right. Prime Minister Netanyahu is a Churchill in a world full of Chamberlains.An American president should stand with our ally Israel and never allow an evil regime to carry out its threat to annihilate Jews and kill Americans.President Obama counters that the alternative to his disastrous deal is war with Iran. This is a false choice. Reagan said “trust but verify.” Obama’s approach is “trust but vilify” – he trusts our enemies and vilifies those who disagree with him.While I would not hesitate to use force against Iran’s nuclear and ballistic missile programs if necessary, I believe that there is a smarter, more enduring solution to the Iran problem – regime change.We should empower Iran’s democratic opposition to topple the regime.I would announce on my first day as president that the new policy of the United States is to support freedom in Tehran. I would double-down against Iran with tougher sanctions. Officials within the Iranian government, clerical establishment and military would face a clear choice: They can stay on a sinking ship, or abandon a regime that has outlived its shelf life.To Iran’s courageous dissidents and demonstrators, my administration would have a simple message: The United States is with you. Working with Congress and the Iranian opposition – both inside and outside the country – I would expose the regime’s crimes and lay the groundwork for a democratic transition in Tehran.Finally, we should bring Iranian officials to justice in international courts.No longer would the United States stand by as international organizations berate Israelis for building bedrooms in Judea and Samaria, while ignoring Iranian threats to “replace Israel” with a “big Holocaust.” Iranian leaders must be prosecuted for inciting genocide and murdering countless innocent Jews, Christians and Muslims across the world.There is no reason why the free world should tolerate a supremacist regime that threatens Israel’s very existence. The current tensions with Tehran are not inevitable. Persians and Jews enjoy cultural ties dating back to ancient times. More than 100,000 Jews lived in Iran on the eve of the 1979 revolution.A democratic Iran would present its own challenges, but it would go a long way in addressing one of the most serious threats Israel and America face. Let’s remember that amid internal political change, many other countries have relinquished their pursuit of nuclear weapons and gotten out of the terrorism game. The same could happen with Iran. The ripple effects would be felt throughout the Middle East, where the Quds Force and other Iranian proxies currently run roughshod, destabilizing the region and threatening the US and its allies.As the Obama presidency comes to a close, the United States and Israel have a new opportunity to rebuild relations and stand united against the Islamic Republic. By empowering Iran’s opposition, the United States and Israel can address the Iranian threat at minimal cost, keep Israelis and Americans safe, and give meaning to our shared commitment: Never again!

The writer is a former governor of Arkansas and a 2016 Republican candidate for president of the United States.