Tisha Be’av in Jerusalem The fact that all of these events took place less than two kilometers from where I live in Jerusalem adds a different dimension to my experience of this somber day. 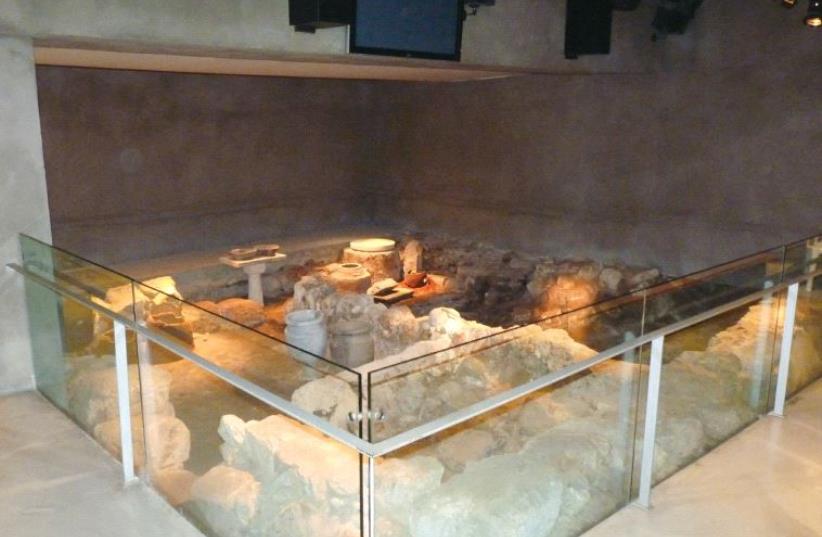 A view of the excavated house at the Burnt House Museum
(photo credit: Wikimedia Commons)
Advertisement
In London, this time of year is referred to as “the silly season.”Nothing very much happens during the long days of August and the news stories are often trivial and mundane. In my new home, Jerusalem, this period of the year is far from silly. It is seen by many as one of the saddest periods of the Jewish calendar culminating in the fast of Tisha Be’av (ninth of Av) on Sunday. Being here for this day is an extraordinarily moving and meaningful experience.It concludes a three-week period of mourning that began on 17 Tamuz and ends one hour after sunset on Sunday.Let us recall the destruction and trauma we mourn on Tisha Be’av. The First Temple was destroyed on this day in the Jewish calendar in 423 BCE. Five centuries later (in 70 CE), the Jews were shocked to realize that their Second Temple was destroyed on the same day as the first.The Bar Kochba revolt ended with a brutal massacre in the final battle at Betar. The date of the massacre was also on 9 Av.The Jews were expelled from England in 1290 on Tisha Be’av and, in 1492, the Golden Age of Spain came to a close when Queen Isabella and her husband Ferdinand ordered that the Jews be banished from the land. The Hebrew date on which no Jew was allowed to remain on Spanish soil was – poignantly – 9 Av.In Israel the day is marked as a period of mourning. Even El Al, Israel’s national airline, marks the day by replacing regular entertainment with special programs for Tisha Be’av.The city of Jerusalem, with its large Orthodox population, has a special claim on this day. During the nine-day run-up to the fast, the sense of foreboding and uneasiness in the atmosphere is almost palpable. Most observant Jews won’t travel or expose themselves to any form of risk or danger until the fast is over.For me, being in Jerusalem at this time is particularly poignant. On Tisha Be’av night my wife and I join dozens of neighbors. We take straw mats or low stools and make our way across the road to the Haas Promenade where many communities gather with flashlights and LED lanterns. At prearranged stages along the promenade different congregations set themselves up at strategic points to face the Temple Mount. It is as if one has been transported back in time to the period two millennia ago when the Babylonian or Roman conquerors marched their Jewish captives to the edge of the city, allowing them one last glimpse of their homes and the Temple going up in flames. The reading of the Book of Lamentations becomes all the more meaningful as one listens to the plaintive voice of the reader in the cool night air. This is a very different experience from being in London, New York or Johannesburg, where I grew up.For me, the real challenge of Tisha Be’av in Jerusalem is the day of the fast.Inevitably the weather is hot and dry, often reaching the mid 30s centigrade. In former years when I found myself in Jerusalem on Tisha Be’av, I would wend my way to the Old City and the Jewish Quarter.There is no better place to soak up the atmosphere of the day than in front of the Kotel (Western Wall). Once again, many hundreds of worshipers spend the entire night seated cross-legged on mats or on low stools reciting Kinot (elegies).One year, after attending the morning prayers at the Kotel, I recall making my way to the Jewish Quarter, where I visited the Museum of the Burnt House.This is a rather graphic way of remembering what happened in Jerusalem on Tisha Be’av during the Roman attack.Scorched wooden beams and layers of ash and soot bear witness to the huge conflagration that raged in this house.The ultimate grisly reminder of the event was found in a room that forensic archeologists identified as the kitchen.They found the forearm bone of a 25-year-old Jewish woman. The bone was buried in accordance with Jewish law. A photograph of it remains on display in the museum.The fact that all of these events took place less than two kilometers from where I live in Jerusalem adds a different dimension to my experience of this somber day. Being so physically close to where these events took place makes the tragedy more real. Jeremiah’s haunting descriptions of the destruction of the city and the burning of the Temple is no longer only a biblical narrative. It has inspired me to delve deeper into the spiritual meaning of the day, and there is no better place to do so than in the flourishing study halls, synagogues, yeshivot, lecture rooms and educational establishments of this city. It bears testimony to Jeremiah’s more positive prediction: “In his days, Judah shall be saved and Israel shall dwell safely, and this is his name that he shall be called…” The writer is an international management consultant who has worked and lived in Europe and the UK and now lives in Jerusalem.