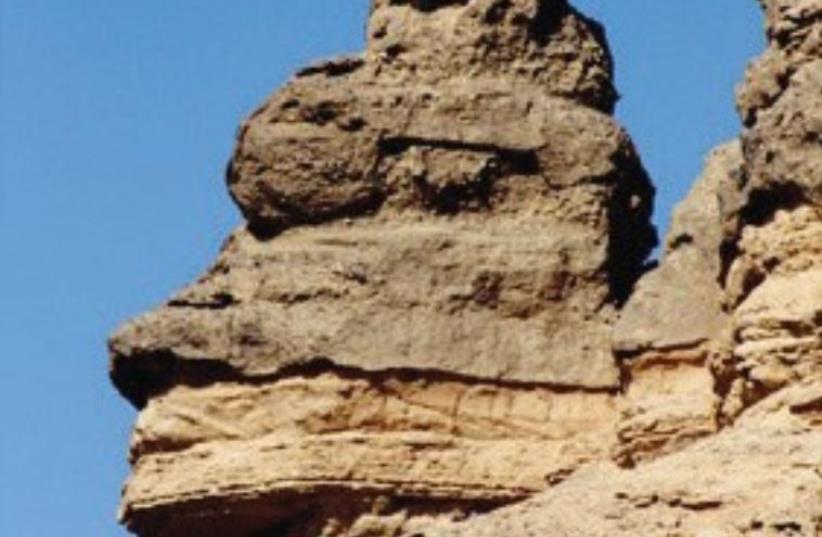 Ada
(photo credit: RUTH CORMAN)
Advertisement
I’d like to take you today, said Alon, to meet a special woman whom I really love. I go to visit her from time to time and never fail to be delighted when we meet. She is solid, dependable, beautiful – and never answers back.”“Fine,” say I, and off we go.After an hour “off-piste” or whatever the equivalent is in the desert, we reach a beautiful area with rocky hills and a dried-up wadi with shapely acacia trees dotted around and some low bushes, evidence of a hidden water source.The place is called Be’er Ada – the Well of Ada – and the woman we seek is the eponymous Ada.It is common knowledge that erosion can alter the landscape dramatically. Whether as the result of climatic changes, storms, strong winds, rain or flood water, these factors combined with the geological element of the type of rock, its permeability or porosity can produce some extraordinary shapes. Ada is one such example.Few people, however, have had the pleasure of an encounter with her and we enter the wadi with a feeling of privilege and respect. We drive a few hundred yards and stop, and there she waits – impervious to our presence and observing the surrounding territory; a little stern perhaps, but completely in command of all she surveys.The original Ada, after whom she was named, was a biblical character from the book of Genesis, married to a man named Lamech considered by some to be the world’s first polygamist. He took another wife in addition to Ada, named Zillah.Ada bore him a son, Jubal – father of “those who dwell in tents and have livestock,” and Zillah had a son called Tubal Cain who went on to be the forefather of all coppersmiths and blacksmiths.Lamech is credited with having written the oldest piece of poetry in the world (Genesis 4:23- 24) in which he writes to his wives: “I have killed a man who attacked me and a young man who wounded me.”This disturbing revelation, plus the fact that she had to put up with her husband taking a second wife, could be the reason Ada sits there impassively and somewhat tight-lipped.After a socially acceptable sojourn with the lady in question, we bade her goodbye and left to travel south in the direction of Eilat.By now it was getting dark. We had spent a wonderful day and I looked forward to an overnight stop, a shower and a chance to rid myself of the accumulated dust from our travels.And then it happened. A sudden “phut” and we careered dramatically off the road. By now it was pitch black, the darkness punctuated only by the headlights of infrequent and fast moving traffic that passed us on the main highway.Back in England when you get a flat tire, you phone the RAC or the AA. Out they come and fix the car – and off you go. Here we were in the middle of nowhere, or so it seemed, and this was no ordinary tire, but a mammoth version that looked to my inexperienced eye like it would need a team of muscular navvies to change it.Alon struggled patiently with the wheel but with no light whatsoever to see what he was doing.The only tool available to him was a jack that would have been perfect for a kiddies’ wind-up toy, but not much more.There are very few times in my life when I wish that I was a man, or failing that, at least someone with a modicum of knowledge about how to fix things. It is a well-known statistic that most Jews and DIY are incompatible. However, in my case my ineffectiveness was compounded by the fact that my dad and my sons had always been quietly confident in this area of activity, leaving me even more piteously dependent.So there I stood for what seemed an age, shivering in the desert night, an object of total inadequacy, making facile offers of help. Suddenly a car pulled up. Out stepped five young people, three men and two girls who were on their way to work at Eilat airport. They had seen our plight, immediately turned their car around and came to our rescue.There are not many places in the world where this happens. Most people are happy to pass by an incident – but here they were, these nameless angels of mercy on their metaphorical white chargers. They came, they cheerfully helped to replace the tire, and then insisted on leaving us with a bottle of cola and some cakes as a parting gift.Bad things, it is said, are sent to test us. The up side is that one can always find a positive aspect of every crisis – in this case it was the way these wonderful young people went out of their way to do us a good turn. Huge thanks to you all, whoever and wherever you are.

The writer’s stories can be read at ruthcorman.wordpress.com, and her new book, Unexpected Israel: Stories You Never Read in the Media, published by Gefen, will soon be available at bookstores and Amazon.
Advertisement
Subscribe for our daily newsletter