Wanted: A courageous leader or two

Palestinian Foreign Minister Riyad al-Maliki said that he does foresee a situation in which the Palestinians will return to direct negotiations with the Israelis in the near future. 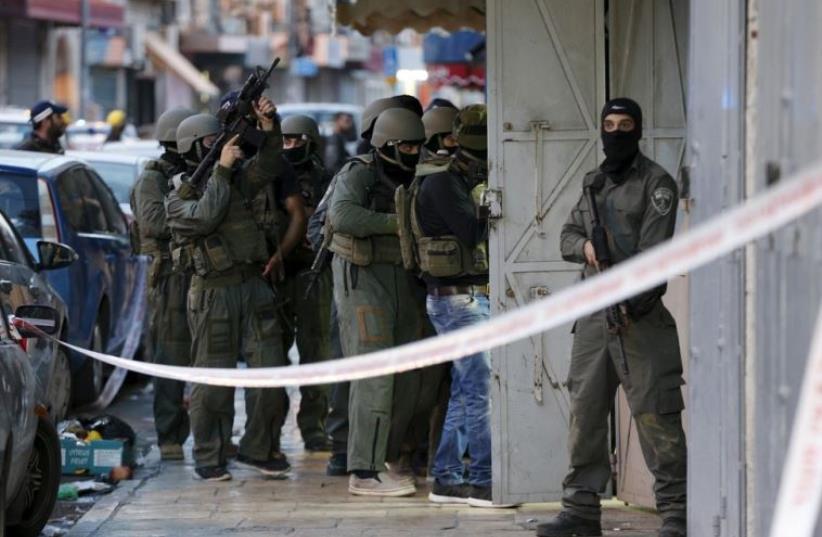 Israeli security forces search the scene where a Palestinain shooting attack on Israeli policemen took place just outside Jerusalem's Old City
(photo credit: REUTERS)
Advertisement
Maybe it was a complete coincidence, but two different stories came out in the media a few weeks ago regarding the chances of reaching a peace agreement with the Palestinians.Palestinian Foreign Minister Riyad al-Maliki said that he does foresee a situation in which the Palestinians will return to direct negotiations with the Israelis in the near future.And Prime Minister Netanyahu claimed that he offered a number of times to return to immediate negotiations with the Palestinians with no preconditions, but that his requests were ignored. Mahmoud Abbas then retorted in an interview, as he has in many of his previous speeches, that as long as Israel is inciting against the Palestinian Authority and attacking the mosque on the Temple Mount, it will be impossible to conduct diplomatic negotiations.And this week, Saeb Erekat instructed the Palestinian people to completely disconnect economically from the State of Israel and to even mint their own coins.Since the current wave of terrorist activity started in early October, more than 200 attacks have been carried out, the vast majority of which have taken place in Judea and Samaria. One of the biggest changes from previous terrorist waves is that some of the attacks were carried out by members of the Palestinian security forces, which is very unsettling. Overall, this wave is very much like to the two previous intifadas, apart from the fact that most of the individuals carrying out the attacks now are not associated with any specific organization.If you take a look at terrorist activity over the course of the last two decades, you’ll see that the current wave is just a continuation of this activity. Despite the making of festive declarations, the signing of a peace agreement in 1993 between Israel and the Palestinians, and the presenting of Nobel Peace prizes to everyone involved, nothing has actually happened. Arafat never intended to implement the agreement and establish a Palestinian state, since that would have been tantamount to compromise. And Abbas is following closely in Arafat’s footsteps, granted, though, with a lot less charisma. In other words, Abbas has absolutely no intention whatsoever of trying to reach a peace agreement or creating a Palestinian state as stated in past agreements.The platitudes and the meaningless public statements made by both sides to the media are just cover stories. Netanyahu invites the Palestinians to take part in negotiations without preconditions, because he knows that Israel would never be able to meet the ridiculous conditions the Palestinians are imposing. Abbas says that he definitely wants peace and would be more than happy to come back to the negotiating table, but only if Israel promises ahead of time that a Palestinian state will be established within the 1967 borders, that Israel will provide for the 6 million Palestinian refugees, release all Palestinian prisoners ahead of time, and commit to (east) Jerusalem being the capital of the Palestinian state.Of course, he also has requirements that completely ignore previous agreements reached between the Palestinians and Israelis, such as evacuating settlements, and recognizing Israel as a country, but not as the Jewish state. Anyone who knows Abbas well knows that never before has he showed such determination or leadership ability. Abbas has never been a true leader, in the sense of being capable of making tough decisions or leading his people to reach a true peace. Like Arafat, he may be the official leader of his organization, but he never succeeded in leading his people anywhere. Like Arafat (and in some ways, like Netanyahu, too), he lacks vision, could care not less about the needs of the Palestinian people, and is mostly concerned about his own personal political survival and how he will be remembered in the annals of history.When two sides remain stuck in the same place for years without finding a way to move forward, the laws of physics kick in and the situation begins to deteriorate. It’s only natural that another wave of violence broke out, and that international bodies condemned us and imposed boycotts upon us, as more blood continued to be spilled.We must accept the fact that there is no easy solution to our predicament.Netanyahu is correct when he says that we have no partner with whom to negotiate since the conditions Abbas is demanding are not realistic. And Abbas is also correct when he claims that the current Israeli leadership is not interested in establishing a Palestinian state or evacuating settlements.There is no magical solution, and no one is so naïve as to believe that Israelis and Palestinians will be dancing in the streets together anytime soon. But the Palestinians are dependent upon us economically, since a huge percentage of Palestinians work within Israel.A Palestinian state could never exist without Israel beside it, and everyone knows it.The smart thing to do here would be to gather up all our courage and take some real steps, no matter how difficult they are, to strengthen the trust between us and bring back security for both sides. We might not succeed in achieving peace and friendship with the Palestinian people, but we should be able to reach some sort of mutually satisfying agreement, which we must do before we sit back down at the negotiating table. And the only way we’ll be able to do this is if the leaders on both sides put down their masks for a few minutes and make some real changes.

The writer is a former brigadier-general who served as a division head in the Shin Bet (Israel Security agency).Translated by Hannah Hochner.
Advertisement
Subscribe for our daily newsletter