We were once slaves

We were slaves but now we are free. When we sit down at our Seder tonight, we should think long and hard about what that means. 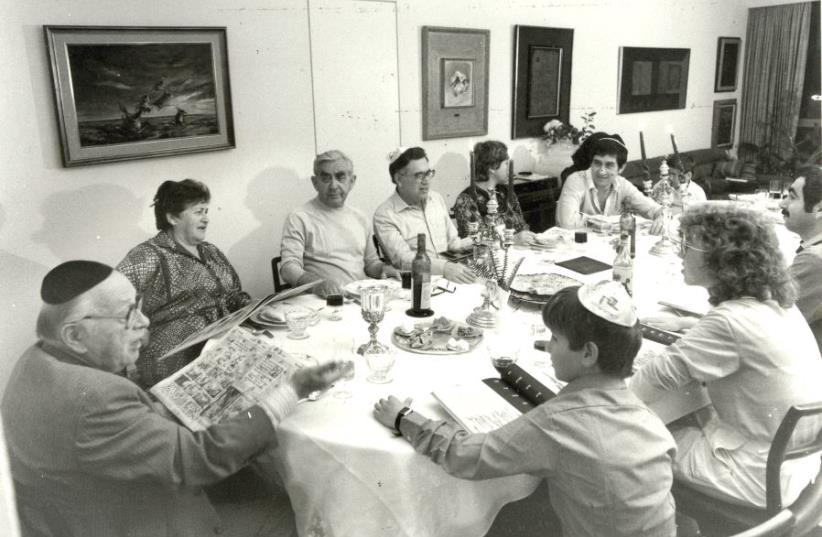 A Passover Seder
(photo credit: JERUSALEM POST ARCHIVE)
Advertisement
Tonight, virtually all Jews in Israel will gather with family or friends for the Passover Seder to recite the Haggada and partake in all of the delicacies and rituals associated with the holiday.According to a Jewish People Policy Institute survey in 2017, 97% of Israelis Jews said that they either host or participate in a Seder. Of course, that doesn’t include the mini-Exodus re-enacted by the thousands of Israelis who have traveled abroad over the last few days, stretching Ben-Gurion Airport to the max. Thankfully, they are offset by the multitudes of tourists arriving for the holiday, as well as those celebrating Easter.During the Seder, Jews sit down and recount the story of the Israelites and their time as slaves in Egypt. The Haggada gives considerable space to the hardships our ancestors faced – the bricks, the mortars and the tears. Likewise, the 10 plagues invoked on Egypt and Pharaoh are some of the central elements of the Passover theme and the Seder ritual.Recalling the misfortune befallen our people, is a time-honored Jewish tradition. But there’s another way to look at the story of Passover that doesn’t invoke this victim image. Rabbi Benjamin Segal, a highly regarded educator and lecturer based in Jerusalem, recently gave a talk about Passover in which he suggested that instead of focusing on the harrowing time while we were slaves in Egypt, we should emphasize what happened afterwards.We were taken out of Egypt as slaves and led into the Promised Land as free men and women. That point, said Segal, tends to get overshadowed, but is actually the main message of Passover. We are no longer in bondage, but are instead the masters of our own domain.The creation of the State of Israel made this point even sharper. For the first time since the destruction of the Second Temple, Jews have a place to call their own and are not subject to the whims and persecution – or worse – of their host state. As free people in our own land, we are no longer shackled by the chains of servitude and fear.We are no longer facing an existential threat, as some politicians would like us to think. We have one of the strongest militaries in the world that is poised to face any threat thrown our way.To be sure, Israel still lives in an extremely rough neighborhood, and there is no shortage of enemies who would be very happy to be latter-day Pharaohs and rejoice in our destruction.But Israel is no longer made up of timid slaves, afraid to stand up for themselves and demand equality. The very existence of Israel changes everything. For one thing, it frees us up – no pun intended – to look around somewhat differently.As ones who now determine our own destiny, we now have an obligation that Jews historically did not have to deal with – treating the stranger in our midst.The words that we repeat in the Haggada – “Remember that you were slaves in Egypt” – are not only meant to remind us to not take our freedom for granted, but can also be seen as a message about remembering how we were treated as strangers – and how we should treat other strangers now.The strangers in this scenario are, of course, the non-Jews of Israel. Whether they’re Filipino au pairs, foreign workers from Thailand, migrants or refugees from Eritrea, Muslim-Israelis from Taiba, Ethiopian immigrants, Christian pilgrims or Palestinian laborers, we must give up old habits of looking at them as threats, eyeing them with suspicion or disdain, and making them feel like unwelcome outsiders.As the majority here, we need to recall that we were once slaves and it is our obligation to ensure that we don’t do the same to the “stranger” in our midst. We’re no longer a persecuted people – and with the hindsight and wealth of experiences that our people have endured, we are well positioned to learn from the past and set an example for those whose place in society is not as secure as our own.We were slaves but now we are free. When we sit down at our Seder tonight, we should think long and hard about what that means.