When I was seven 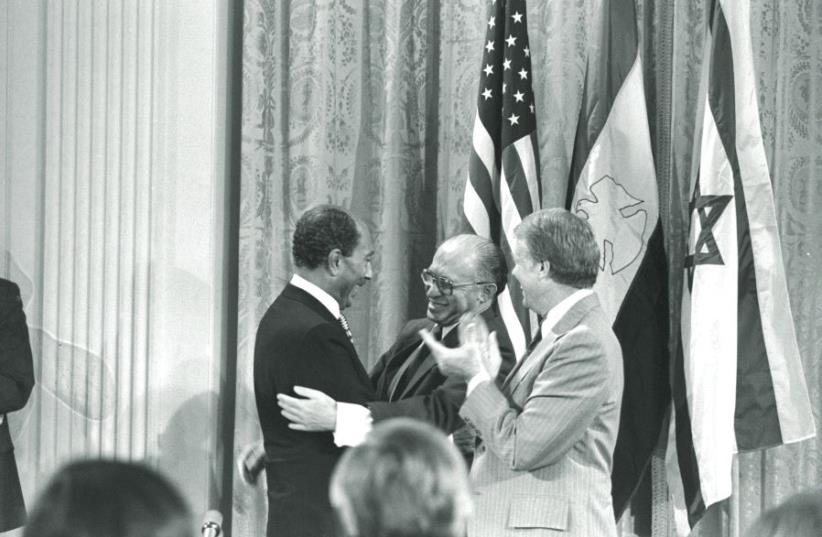 After signing the Camp David Accords, Begin laid down in the Knesset in December 1977 his principles for an autonomy plan
(photo credit: MOSHE MILNER / GPO)
Advertisement
Last week Israel marked a historic milestone in the cementing of its democracy, namely Menachem Begins’ May 1977 electoral victory. A fierce opposition leader in what eventually morphed into the Likud Party, his election was perceived and described by many, regardless of politics, as a revolution. The dramatic change to a government that had held unmitigated power from the moment of Israel’s inception was regarded not only as an important political transformation, but also as having extensive economic, ideological and social implications.I recall awaiting the election results in the familiar Knesset miznon (cafeteria). Through the eyes of a seven-year-old, that was a night filled with unlimited pickles and entertainment, provided by intellectual and political giants doubling as babysitters. In retrospect, considering the challenging path they had traversed, the presence of a seven-year-old at the all-night event likely provided some much needed distraction.Forty years later I vividly remember the moment of the dramatic announcement, which unleashed tears of joy, congratulatory hugs and spontaneous song and dance. I remember the pure, unadulterated sense of joy and victory that I felt, a seven-year-old carried on the shoulders of those figurative giants, overcome with emotion.Following the waves of euphoria for some, and shock and grief for others, came the reality of that dramatic night. To me, the humility of the newly elected leader meant frequent visits to the prime minister’s home following piano lessons at the music conservatory right next door. His values meant what at the time seemed like very late night meetings with Aliza Begin in socio-economically difficult neighborhoods, aimed at improving physical and emotional conditions, instilling hope and encouraging so many to actualize their potential.Before understanding the significance of identity, politics or faith, the unfolding drama meant experiencing first-hand the importance of people being given a genuine, deserved opportunity, accepted and respected for who and what they are, learning to believe in themselves, leading to their mobility and to their ultimate success.On a national level, the ideology of the newly elected leader translated into tangible exposure to and understanding of concepts of liberty, human rights and equality, creating or restoring faith in humankind for many who never experienced it or forgot what it felt like. Beyond theory and rhetoric, Israeli democracy was confirmed as real and concrete in that defining moment. The peaceful transition of government which, until that moment, had been ruled by centralist, socialist leadership, very possibly the only one that could have founded the state, indicated that Israeli democracy had matured. A fledgling country, threatened and attacked by its neighbors; struggling for survival; absorbing immigrants and refugees from geographically, culturally, ethnically and religiously diverse backgrounds – that dramatic moment was without a doubt a central one in the history of the Jewish People generally, and in the then-brief history of the return to Zion in particular.Forty years have passed. As we evolve individually, collectively and nationally, it seems we are on the brink of yet another significant chapter of the journey. The challenges are tremendous, as are the opportunities. Transcending the politics, beyond nostalgia (and avoiding amnesia), there are some significant and relevant insights from that moment in time, 40 years ago, that can guide the journey ahead.Especially significant are the importance of humility, authenticity and integrity in a nation’s leadership, which have a resounding, powerful and empowering effect. Igniting a sense of hope and dignity in the people’s hearts and minds, the covenant between the people and its leadership is renewed. Respect and trust can empower and inspire those who have never received the basic opportunity to take their rightful place in history, regardless of ethnicity, origin, religious affiliation or socioeconomic background. Human rights, which serve as a guiding beacon, along with an innate respect for the court and the rule of law, are paramount. Judaism, which Begin regarded as a fundamental source for universal values, can strengthen and deepen the commitment to uphold and protect. The power of each and every individual to make a difference through the right to vote exponentially multiplies the strength of democracy, bringing out the magnitude of its potential.Those are only some of the relevant lessons which can be learned from that moment in time, 40 years ago. With this understanding comes the awesome responsibility to become and seek the kind of leadership that will honestly and humbly serve; to uphold and protect human rights and the rule of law; to represent the public genuinely; to partake in the democratic process with perseverance, diligence and integrity; to effect change democratically, while maintaining and upholding the delicate balance of power.It seems it’s that time again. Paraphrasing the words of Lukas Graham, “soon we’ll be 70 years old....”The author is a PhD candidate in law at the Hebrew University of Jerusalem, researching the topic of free speech. She is a research fellow at the International Institute for Counter-Terrorism (ICT) at IDC Herzliya and a board member of Tzav Pius.