With a little more urgency and with the whiff of a threat in the air: if you do not participate in an international conference, the French said, we will recognize a Palestinian state. 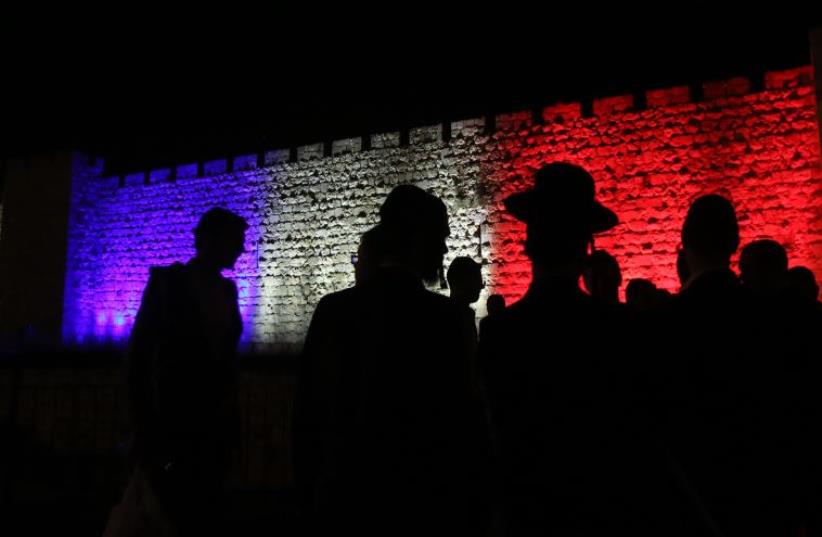 Wall of Jerusalem's old city lit up in colors of French flag
(photo credit: MARC ISRAEL SELLEM/THE JERUSALEM POST)
Advertisement
Not only does Israel lack a foreign minister, it lacks a foreign policy and above all lacks political wisdom. The case of Laurent Fabius, the French foreign minister, tells us everything. The French appeared with a political initiative, an updated version of previous plans and ideas.Nothing really new, but with a little more urgency and with the whiff of a threat in the air: if you do not participate in an international conference, said the French, we will recognize a Palestinian state.Okay. We have heard that before.However, nothing, but nothing justifies the hasty, Pavlovian response made by Jerusalem.Its “no” echoed from one end of the Middle East to the other. Only one response competed with it, the one made by Hamas. Israel and Hamas are part of the same rejectionist society – a great honor. And in the middle is the Palestinian Authority with a flexible, moderate and sensible approach.I remember the many plans created to solve the Arab-Jewish conflict, both before 1967 and after, from all the American administrations, every president, every secretary of state.Various UN institutions and intermediaries and of course the various inventors, also offered plans and took initiatives, and they’ve all gone back to where they came from. Still no solution.The big difference is that in the past Israel was considered to be a peace seeker and made an effort to market herself that way. (Remember that Golda rejected the Rogers initiative on the eve of the Yom Kippur War?) It always had a political and propaganda value to it. It is us against those who refuse to accept peace.What characterizes Netanyahu and his government are reflexes, rash decisions and acting impulsively. Together with saying a loud “no,” it added a sarcastic comment about the peace conference France had with Islamic State that just killed and wounded hundreds of Frenchmen. Why, why rub salt into the wounds? Only one month ago we embraced them with a big hug. All this because they didn’t buy the Israeli claim that terrorism is terrorism is terrorism? In the past (yes, I miss the past), Israel knew how to respond politely. We “listened and learned” and we waited patiently for the Arabs to act their way. Roll the dice for us, and of course they will eventually say no. We received the world’s sympathy and essential understanding of the circumstances of our lives here. Now the tables have turned.By the way, the confusion in the world order started when Saudi Arabia introduced the Arab peace initiative in the early 2000s. And on that subject the Israeli government has still not responded.France is not alone. It followed major countries in South America and Europe that recognized a Palestinian state.Some parliaments, even the British, made decisions that called to recognize Palestine. It could happen to France.We have always basked in Arab recalcitrance, but today, truth be told, it is Israel that does not miss an opportunity to miss an opportunity. After all, we have had good teachers.

The author is an MK from the Zionist Union Party and a member of the Knesset Foreign Affairs and Defense Committee.
Translated by Maya Pelleg.
Advertisement
Subscribe for our daily newsletter