A letter in support was signed by three rabbis from the Sanhedrin organization, including the head of the group’s rabbinical court, Rabbi Yisrael Ariel. 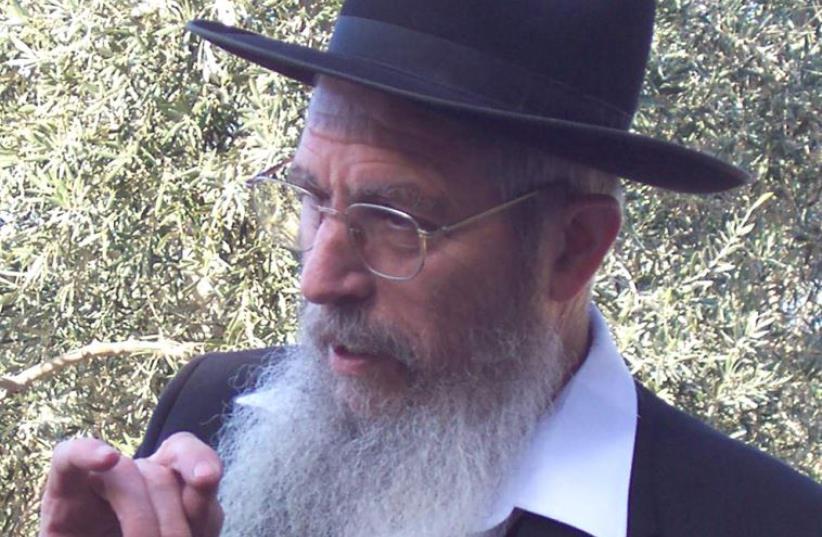 Rabbi Yisrael Ariel
(photo credit: Wikimedia Commons)
A rabbinical organization called the Sanhedrin, which includes several prominent rabbis from the hardline wing of the national- religious community and from the haredi (ultra-Orthodox) sector, wrote letters of support to the 10 men who have been banned from entering Judea and Samaria on Sunday by the Shin Bet (Israel Security Agency).The restraining orders were issued against the individuals due the intelligence agency’s suspicion that they are involved in Jewish extremist groups and activities in the area. The move follows other tough measures against such individuals and groups by the security services following the murder of Sa’ad Dawabsha, 32, and his 18-month old son, Ali, in an arson attack in the Palestinian village of Duma last month.“Praiseworthy are you who represent an example and an inspiration to rabbinical judges and to all the faithful of Israel,” the rabbis wrote in their letter, Ynet reported.“He who redeemed Israel in the days of Greece will be the One who will redeem Israel from the hands of all the dictators as long as they fail to repent quickly before the great and awesome day of God,” the text continued.The missive was signed by three rabbis from the Sanhedrin organization, including the head of the group’s rabbinical court, Rabbi Yisrael Ariel.Ariel is the founder and director of the Temple Institute, a group that prepares the vessels and other requirements for the building of the third Jewish temple in Jerusalem. He is also a former member of the banned Kach Party and ran as the second candidate on the party’s list in the 1981 general election behind its assassinated former leader, Rabbi Meir Kahane.Prof. Hillel Weiss, a member of the Sanhedrin and the organization’s spokesman, told The Jerusalem Post that the letter expressed support for the youth in question “for their self-sacrifice, their dedication and their faithfulness,” and that the reference to “dictators” was directed towards Israel’s current leadership.Weiss, a professor in the Department of Literature of the Jewish People at Bar-Ilan University, said that the letter was not praising violence but rather the youths’ dedication to “settling every part of the Land of Israel.”The group spokesman described the political leadership of the state – as well as the state itself – as “mentally ill” and added that “proportional responses to provocations by the state,” – whether against the right of the Jewish people to the Land of Israel, or to the values of the Jewish people – were acceptable.“There is complete justification in measure for measure and a proportional response and revenge,” he said although he added that murder or physical harm to private Arab citizens was not permissible.Citing efforts of the government and security services to remove settlers from illegal outposts, Weiss said that physically resisting such efforts is permissible.“If the security official tries to beat you, you can beat him back, you are obligated to beat him back, this is a human reaction,” he insisted. “You cannot expect Jews not to defend themselves.There is a right for men to defend their property, their honor and their good name.”He also said that acts of vandalism to express anger and opposition to government action were also acceptable, but said that there was no evidence tying Jewish extremists to the arson attack in Duma and the murder of the two members of Dawabsha family.Weiss said that he is in touch with, and speaks with, radical settler youth and that he acts to restrain their activities.The Sanhedrin organization was established in 2004 as an attempt to revive the ancient rabbinical council known by the same name, which existed during the time of the Talmud and comprised 71 Jewish sages. The institution constituted the supreme religious decision-making body of the Jews during that era.The newly established Sanhedrin – which is not recognized by the state or by mainstream Jewish denominations and groupings as having any formal standing – has adopted radical and hardline positions on the conflict with the Palestinians and on the place of Jewish law in the State of Israel.In March 2005, the organization ruled that it was forbidden for anyone, including soldiers and members of the police force, to cooperate with the disengagement plan from Gaza.The group supports the application of Torah law in place of the secular law of the State of Israel, and in February 2010 ruled that “it is obligatory for every Jew to exclude himself from the secular Israeli judicial system in every matter.”In 2011, after violent clashes between radical settlers and security forces clearing the illegal settlement outpost of Havat Gilad, the organization ruled that it was permitted to “defend the