Space travel rewires your brain due to low gravity - study

The study highlights a need to find a countermeasure, such as artificial gravity, to help humanity spread to the universe around us.

The human body must overcome many different obstacles in order to travel in space, and this includes what amounts to rewiring the brain, according to a new study.

The result of research conducted by the European Space Agency (ESA) and international research team Roscosmos, published in the peer-reviewed academic journal Frontiers in Neural Circuits, is the first-ever analysis of changes in the structural connectivity of the brains of astronauts caused by long-term spaceflights.

How does space travel affect the body?

A number of studies have pointed out the many physiological effects that can be caused by a long duration in space.

According to NASA, the main stressors in space, specifically on hypothetical Mars missions, have been collectively designated under the acronym of RIDGE, which stands for Radiation, Isolation and Confinement, Distance from Earth, Gravity fields and Hostile/Closed Environments. 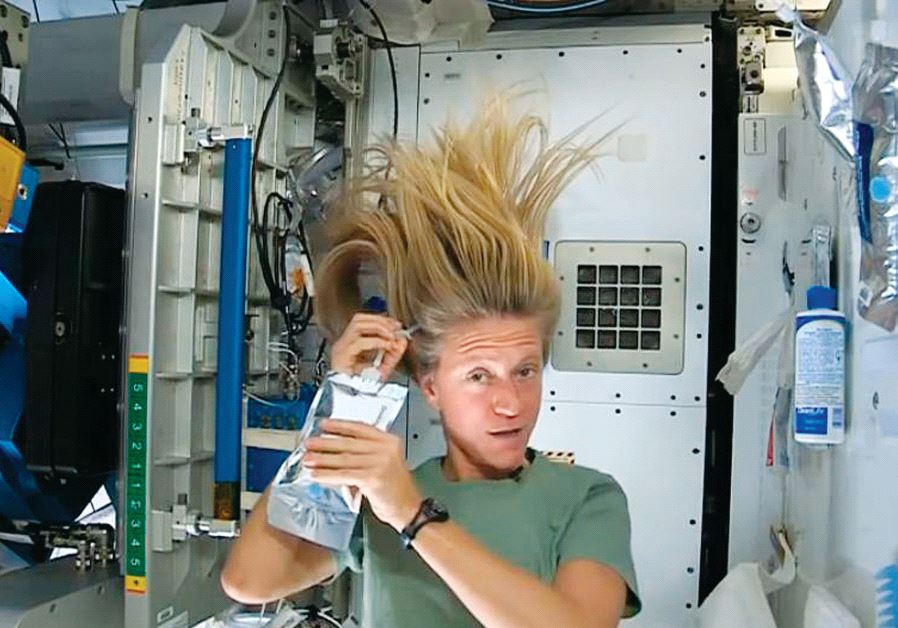 Nasa astronaut Karen Nyberg demonstrates how she washes her hair in zero gravity in outer space during a mission in 2013 (credit: NASA,REUTERS)

These various factors impact the body in many ways. For example, due to the difference in gravity, astronauts' weight-bearing bones lose on average 1%-1.5% of mineral density per month, and bone loss might not be able to be fully healed after they land.

Astronauts also lose muscle mass faster, and the fluids shifting to the head due to gravity can cause vision problems.

The entire change messes with hand-eye and head-eye coordination and balance and is known to cause motion sickness.

Furthermore, the effects of gravity can also cause increased calcium excretion from bones and dehydration, which in turn can lead to developing kidney stones.

But while scientists are well aware of all of this, how spaceflight impacts the brain is something less understood. They have, however, theorized some sort of effect was likely.

A few prior studies have been done, using MRI scans, and these have found some evidence of changes in the brain, but more research was still needed.

In order to better understand how long-term space flights impacted the brain, the team took 12 male cosmonauts and studied their MRI scans taken before and after their trips to space, each of which lasted on average 172 days, and compared to scans from a control group. Eight follow-up scans were also taken of the astronauts seven months after their return.

To analyze them, the researchers made use of a certain brain imaging technique known as fiber tractography, which, as explained by study leader Dr. Floris Wuyts of the University of Antwerp, "gives a sort of wiring scheme of the brain."

And what they found was fascinating.

Firstly, the results supported the concept of the "learned brain," which means that the brain adapts to spaceflight and the many challenges it has, such as the weightlessness of microgravity.

“We found changes in the neural connections between several motor areas of the brain,” explained first author Dr. Andrei Doroshin, of Drexel University.

“Motor areas are brain centers where commands for movements are initiated. In weightlessness, an astronaut needs to adapt his or her movement strategies drastically, compared to Earth. Our study shows that their brain is rewired, so to speak.”

These changes weren't exactly temporary either. When looking at the follow-up scans, these changes could still be seen.

The brain (illustrative). (credit: PIXABAY)
Is this a problem?

As mentioned earlier, astronauts lose muscle mass and bone material density at a faster rate in space, and they can suffer from a wide variety of other physiological changes. However, there are some countermeasures to combat this. In the case of muscle mass, for example, there are diets and exercise routines available.

For the fluids going to the brain, lower-body negative pressure devices could help fluids go to the legs. Certain medical solutions can help stem bone loss and stop kidney stones from forming.

But we don't yet have a countermeasure for the brain.

Since the brain changes seem to be in some ways long-lasting, it is possible the brain will have a hard time readjusting to Earth after being changed by spaceflight.

And this is important, because if we don't find a countermeasure for this, then it could become more prominent the longer the time spent in spaceflight.

Considering the fact that, at minimum, a flight to Mars would last nine months, it is possible that longer trips in space could have even more pronounced impacts on the human brain. Without a countermeasure in place, it could become considerably difficult.

However, it does once again reinforce the importance of finding what would be, in theory, an ideal solution: Artificial gravity. However, as of yet, no way to actually have functional and viable artificial gravity has emerged. As such, other countermeasures will likely be needed.

Ultimately, learning more about how the brain is impacted by time in space can help us understand more about space travel and how humanity can begin spreading further into the universe around us.