Was the Six Day War fought in part over Israel’s nuclear program?

“I am trying to show what might be an alternative narrative to what led to that war, or to combine the two narratives together. This is the last big secret.” 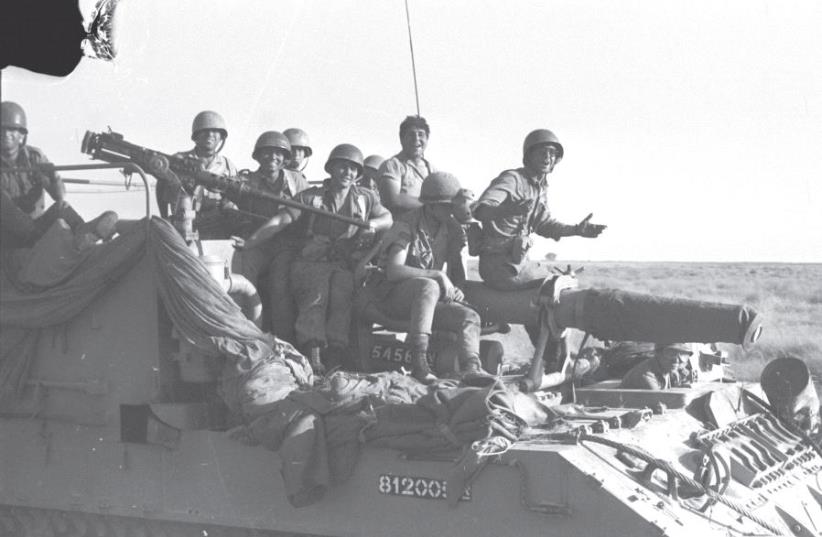 Israeli troops near Rafah during the Six Day War
(photo credit: DAVID RUBINGER,GPO)
Advertisement
The 1967 Six Day War that restructured the entire Middle East may have partly been fought over Israel’s nuclear program in Dimona, top nuclear expert Avner Cohen told The Jerusalem Post on Monday.While Cohen acknowledged the many pressures on Israel and its adversaries which led to the war, he argued that a sizable part of going to war may actually have been a byproduct of Egyptian-Israeli actions related to Dimona as Israel’s last defense.Cohen, a Professor at the Middlebury Institute of International Studies at Monterey and one of the leading experts on that program, made the comments as he unveiled a wealth of new documents about the topic on the Woodrow Wilson Center’s website on Sunday and Monday.“I felt very puzzled and intellectually unsatisfied with the classical narrative of the 1967 war. Part of my purpose in this work is to shed light on a piece of the war which until now has been put aside, or treated as marginal or as nonessential,” Cohen said.“I am trying to show what might be an alternative narrative to what led to that war, or to combine the two narratives together. This is the last big secret.”Regarding the non-discussion until now of the nuclear aspect of launching the 1967 war, Cohen said, “You need to understand the Israeli psyche. People did not want to discuss it. But people need to confront and explore their own history.”Cohen explained the background to his perspective: “On May 27, 1967, Egypt was very close to launching an offensive. There was a real crisis and there was a great deal of angst and uncertainty. They [Israel] worked day and night to make the nuclear ability into something operational. The crisis showed that they almost had something, but didn’t have it yet.”
50 Years Ago Today | Six Day War Project
A big piece of the new documents presented by Cohen included a never-before-seen 1999 interview he had with former IDF Brig.-Gen. Yitzhak Yaakov. Yaakov was allegedly involved in planning a potential nuclear test demonstration in the Sinai to deter Egypt from continued fighting as a last-resort scenario to ensure Israel’s existence in the case of a looming defeat.According to Cohen, Yaakov helped “give them the operational capability. Planning for deploying helicopters, logistics, protection, security – everything to make a nuclear demonstration possible. He took it upon himself to do military support to make it operational... This was the real moment that Israel crossed the [nuclear] threshold.”Cohen acknowledged that there was little other direct evidence of this backup doomsday scenario besides Yaakov’s detailed testimony, especially from others who were involved, such as Rehavam Ze’evi and Yitzhak Rabin, already deceased.But he pointed to significant circumstantial evidence.Cohen noted declassified minutes from a May 26, 1967 meeting between then-prime minister Levi Eshkol and the Knesset Foreign Affairs and Defense Committee in which Eshkol refers to the consequences of Egyptian Air Force reconnaissance flights over Dimona and the implications of a weapon being stored there.In other words, Egypt may have acted aggressively – potentially to strike Dimona – and Israel might have acted aggressively to defend Dimona.Egypt sent reconnaissance flights over Dimona on both May 17 and May 26, 1967.According to Cohen and documentation he quotes – often from various persons involved in the events – the Israeli government and IDF took the flights as a potentially serious threat to its nuclear program and escalated military readiness.Rabin and then-Gen. Ezer Weizman held an emergency meeting with Eshkol to consider options, while the security cabinet was “shocked” at the developments.In the May 26 meeting, Cohen quoted Eshkol saying, “Today four [Egyptian] airplanes flew over Israel. We immediately telegrammed Abba Eban about it. The purpose of a certain weapon can be crucial in this matter.”According to Cohen, this passage and accounts from other interviews with those involved in the program about rushed activity during that time period, confirm high-level concerns about Dimona worked into the decision- making of key leaders.Further, he said this additional evidence confirmed Yaakov’s nuclear test last-resort scenario.He asserted that the lack of post-war documentation stemmed from a desire to deemphasize the scenario and the nuclear angle once Israel emerged so successful militarily.Cohen asks in documentation on the Wilson Center Website, “How real were the Israeli ever-present concerns over Dimona? Was Dimona a true high-priority Egyptian target, possibly even the ultimate (but hidden) trigger for the entire crisis, or perhaps it might have been mostly an Israeli obsession, a mirror image of perceived Egyptian thinking?” Overall, Cohen said, “It is now widely believed that Egypt did plan to launch an aerial attack on Israel in the morning hours of May 27. Israeli air bases and (probably) Dimona were the key targets.”Cohen decided that the 50th year anniversary of the 1967 war was the right time to publish his interview with Yaakov.The alleged nuclear test demonstration plan never came to fruition due to Israel’s massive victory in the war. But Cohen contends that nuclear calculations and miscalculations still might have been a major factor leading to the conflict.Yaakov was arrested in 2001 on charges of “high espionage” after telling his story to Cohen and received a twoyear suspended sentence. He died in 2013 at age 87.