After Itai Shechter celebrated scoring a goal in Hapoel’s 3-2 victory at Red Bull Salzburg he pulled a red kippa out of his sock and placed it on his head. 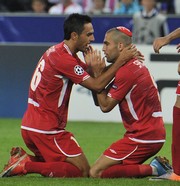 After Itai Shechter celebrated scoring a goal in Hapoel’s 3-2 victory at Red Bull Salzburg in the first leg by pulling a red kippa out of his sock and placing it on his head, the club’s management purchased some 10,000 light grey kippot with the Hapoel emblem on them to hand out to fans ahead of Tuesday’s encounter.However, few supporters were seen wearing the kippot inside Bloomfield Stadium and Tel Aviv’s publicity stunt will not be repeated when the team faces Europe’s big guns on the most prestigious stage continental soccer has to offer.Shechter was booked for his initial celebration, but the yellow card will prove to be insignificant as single cautions received before the group stage expire upon completion of the playoffs.
Advertisement
Subscribe for our daily newsletter