Career peak for Pe’er with rise to No. 14

Just reward for the 23-year-old’s superb performances during the recent clay-court season.

By JEREMY LAST
JUNE 8, 2010 12:47
Shahar Peer good 311
(photo credit: Associated Press)
Advertisement
Shahar Pe’er rose to a record 14th in the WTA rankings on Monday, her highest ever ranking.It was a just reward for the 23-year-old’s superb performances during the clay-court season in recent weeks. 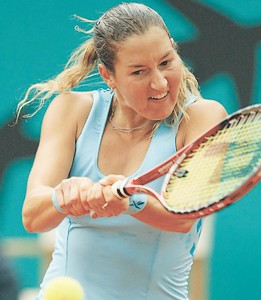 Pe’er reached the semifinals at Madrid and Stuttgart before progressing to the last 16 at Roland Garros last week where she was beaten by No. 1 seed Serena Williams.The woman from Maccabim was clearly delighted with her achievement, as seen by the latest post on her twitter account.“I officially broke the best ranking EVER of an Israeli tennis player!!! 14 :-)” she wrote.Anna Smashnova in 2003, and Pe’er herself in 2007, both reached No. 15.Pe’er is now taking a week’s break before preparing for Wimbledon at Eastbourne next week. And she believes she can get over the hump over losing to the Williams sisters.

“This is not a mental block. I am only 23 so I have a lot of time to beat the best in the world,” she said last week. “I said at the start of the season this would be one of the best for me. I hope I can continue like this in the coming months.” Meanwhile, Dudi Sela began to put his poor clay court season behind him on Monday afternoon, coming back from a set down to defeat Australia’s Chris Guccione in the first round at Queens Club, 6-7(4), 7-6(5), 6-4.The 25-year-old Israeli, currently ranked No. 63 in the world, started shakily, but finished strongly against the man from Melbourne (212).Sela, who performed admirably at Wimbledon last year where he reached the fourth round, will be confident of beating Luxembourg’s Gilles Muller (196) in the second round at Queens.
Advertisement
Subscribe for our daily newsletter