By NIV ELIS
USelections2012
(photo credit: Supplied)
Advertisement
Twitter’s trending topics, the Top 10 terms and tags being tweeted at a given time, reflect the momentary, conversational zeitgeist of its users in real time.  The list offers insight into the various issues people are talking about at a given moment. On the rare occasion when one topic manages to occupy several of the trending terms, it is a clear sign that an issue has struck a chord with the public.That’s what happened within minutes of US President Barack Obama telling ABC News that he had finished his “evolution” on whether to support gay marriage last Wednesday, becoming the first sitting US president to openly advocate same-sex nuptials.Viral video of the week:Suddenly, Tweeters around the country were talking about #MarriageEquality, Mr. President, POTUS, #IfIWasPresident, #FutureBidenGaffes (a reference to the fact that Obama’s announcement was forced by Vice President Joe Biden, who prematurely expressed his own support for gay marriage days earlier) and Log Cabin Republicans (a gay Republican advocacy group). The reactions occupied 60 percent of the terms on the trending list.Tweet of the Week:

Across the Internet, gay rights supporters expressed joy at the announcement, which helped re-energize the liberal base that had grown disillusioned with Obama since his 2008 campaign. The Obama campaign, immediately pushing an onslaught of pro-LGBT emails, adverts and merchandise, managed to ring up over $1 million in donations within 90 minutes. A George Clooney-backed fundraiser in Hollywood a few days later, already expected to be a bonanza for Obama, ended up pulling in a record $15 million.While the general reaction was positive, reflecting the growing majority of Americans’ belief that same-sex couples should be free to wed, the move prompted swift condemnations from social conservatives as well. Several hours after the announcement, religious Tweeters opposed to Obama’s stance managed to trend “Put God First” on Twitter right alongside “Gay Marriage.”Senator Rand Paul, son of unlikely GOP candidate Ron Paul, said he didn’t think Obama’s views “could get any gayer.” Bristol Palin, daughter of former vice presidential candidate Sarah Palin, caused an uproar when she lambasted the president in her blog. Responding to Obama’s explanation that conversations with his daughters helped him reach his decision, Palin wrote, “It would’ve been nice if the President would’ve been an actual leader and helped shape their thoughts instead of merely reflecting what many teenagers think after one too many episodes of Glee.” Angry fans of the musical comedy show and gay rights advocates alike quickly shot back on Twitter:

"Obama's daughters watch too much Glee." said Bristol Palin who must have watched too much 16 and Pregnant.

Fox News got into hot water for its knee-jerk reaction to the announcement, headlining its Fox Nation website with the proclamation, “Obama Flip Flops, Declares War on Marriage.” 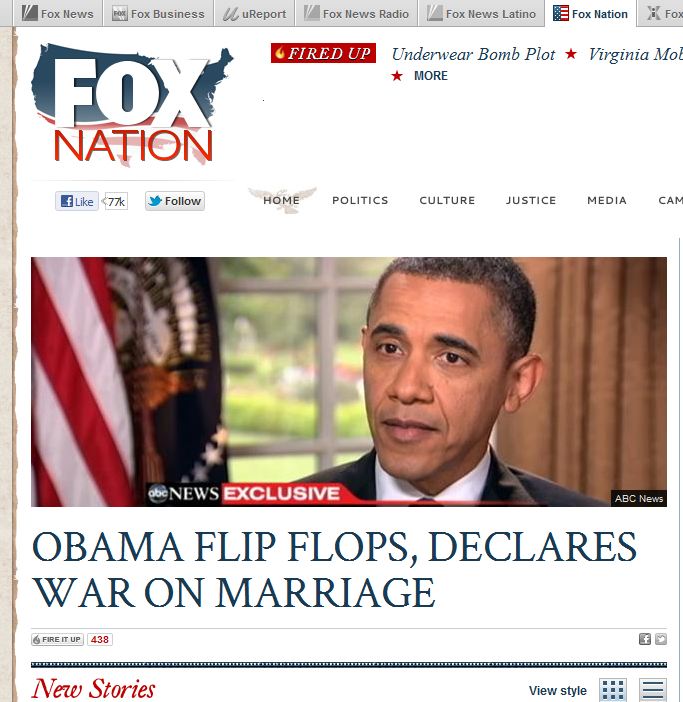 Though they quickly changed the headline to “Obama Flip Flops on Gay Marriage,” they were not quick enough to escape criticism for their heavy editorializing. The Huffington Post even produced a meme out of the incident, imagining the kinds of headlines even Fox would have rejected, such as “Obama Actually Gay Muslim, Bin Laden Lives.”The Log Cabin Republicans blasted the US president for not arriving at the “Dick Cheney position on marriage equality” a few days sooner, in time to influence North Carolina’s referendum banning gay marriage in their state. As Yahoo! News pointed out, the statements made no mention of presumptive Republican nominee Mitt Romney’s position on the issue.Romney clarified that himself, quickly declaring that he always has been and remains opposed to gay marriage and even civil unions if they entail the same set of rights as marriage.Though it helped him shore up his conservative credentials, Romney’s stringent opposition to gay rights took on a sinister turn following a Washington Post report that that he at his prep school as a teenager. The accusations aligned uncomfortably with the Romney campaign’s own attempts to play him up as mischievous prankster, a portrayal they hoped would break his image as a stiff, un-cool candidate.Romney said he does not remember the incidents, but admitted that “back in high school, I did some dumb things and if anybody was hurt by that or offended, obviously I apologize for that.” Given the spate of suicides attributed to gay bashing in the United States last year and the anti-bullying activism it has spurred from celebrities, politicians and major companies in the form of “It Gets Better” videos, the bullying charges against Romney may well resonate with the American public.But the Republicans establishment itself may be coming to terms with the fact that opposing gay rights will land them on the “wrong side of history.” In 2004, a weakened George W. Bush used opposition to gay marriage as a wedge issue to distract from the flailing Iraq War. In 2012, Obama is using support for gay marriage as a wedge issue to distract from the flailing economy. The only reason that is possible is because more and more of the American electorate is coming to see gay marriage as a civil right. A leaked memo by a top Republican pollster warned that, even among Republicans, support for gay marriage is growing "at an accelerated rate with no sign of slowing down.” It recommends that Republicans start supporting gay rights as a conservative value, a “freedom to decide how you live and to enter into relationships of your choosing, the freedom to live without excessive interference of the regulatory force of government.”#USelections2012 offers weekly insight into the US Presidential election through a social media lens, tracking candidates as they try to reach 270 electoral votes in 140 characters or less.The writer is a Breaking News editor and blogger at The Jerusalem Post. Read his blog ‘The Bottom Line’ here.