It's not just mineral water and mud. Hobby-hiker Yitzchak Miskin journeys through one of Israel's greatest wonders.

By YITZCHAK MISKIN
Hiking the Dead Sea
(photo credit: YITZCHAK MISKIN)
Advertisement
The Dead Sea is one of the world’s most renowned health and therapeutic resorts. People come from all over the world to soak their bodies in the therapeutic minerals of the Dead Sea and to cover their bodies with the mineral-concentrated mud of the Dead Sea. However, a while ago, just before the wintry rains and flash flood season began, my wife and I traveled to the Dead Sea and the Judean Desert on the eastern rim of Israel for a three-day hiking and sight-seeing vacation, and pleasantly discovered that the Dead Sea, a natural wonder of the world, is not just mineral water and mud, but is an extraordinary, all-around “health resort”. 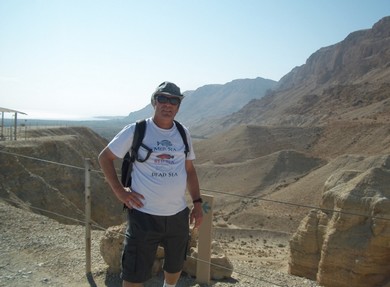 DAY 1: The Way DownAfter driving for 2 ½ hours from Tel Aviv to the Hatrurim Junction on Route 31 (ten minutes past Arad), we turned right onto Route 258 for about 1 kilometer (2/3 mile) until we saw the “Black” trail (black and white striped) on the right side of the road marking the end of the hike we were about to do. We parked our car there, and walked the 1 kilometer (2/3 mile) back to Hatrurim Junction and began waiting for a cab, or hitchhike, back towards Arad, to the signpost of the Kidud Cisterns, 3 kilometers (2 miles) up the road. A young Bedouin stopped, and once under way demanded money for the ride. Fearing the worst, I offered him the 20 shekels I would have paid a real cab for the short ride. He accepted it, and 5 minutes later, he did drop us off at the signpost. To avoid a similar frightening experience, I recommend only getting into a real cab traveling up from the Dead Sea to Arad, or call one in Arad to come get you.After we got out of the Bedouin’s car, we crossed the 2-lane highway (Route 31) and immediately saw the famous orange-blue-white marker of the 'Israel Trail.' We turned left on the 'Israel Trail' and began the steep and long climb up to the summit of Rosh Zohar, the tallest mountain rising up from the Dead Sea. We hiked steadily upward for ½ kilometer (1/3 mile) until we came to the ruins of Rogem Zohar, an old Roman fortress strategically built on this spot because of its commanding view of the Judean Desert rising up from the Dead Sea, built to protect the trade routes and travelers going to and from the Dead Sea. The view was amazing, but nothing compared to what was yet to come. We continued hiking steadily upward for another ½ kilometer (1/3 mile) and finally reached the summit of Rosh Zohar where we were greeted with an astounding 360 degree panoramic view of the entire southern portion of the Dead Sea and Judean Desert. There is nothing to the east, north, and south higher than Rosh Zohar. In addition to the Dead Sea which was panoramically spread out before us, we could see the Moab Mountains of Jordan rising up behind the Dead Sea to the east, and we could see Masada and the famous Roman rampart off to the left. To the far left, we could see the city of Arad and all the valleys leading down to the Dead Sea. Turning our heads to the right we could see the huge expanse of the Arava and the Negev mountains. And straight down below us, we could see the ruins of Rogem Zohar that we had passed on the way up. It was an utterly breath-taking view of this wonder of the world.              We continued for another 2 kilometers (1.3 miles) on the Israel Trail, and then turned left onto the same “Black” trail on which we were parked 5 kilometers (3 miles) away. The trail descended down into the dry Abuv Stream, and thus began the most “extreme”, rugged, and challenging adventure we have ever had in our lives. We caught up to a large group of hikers who were also descending down into the dry Abuv Stream, and we hiked in the stream with them for a while. Following the well-marked “Black” trail, we traversed the sides of several cliffs, which rose straight up from the stream bed, by holding onto and stepping onto metal hold bars strategically positioned on the sides of the cliffs. We never felt in danger, but needless to say, it WAS dangerous. After a while we parted from the group and continued hiking on the “Black” trail, sometimes in the stream bed and sometimes up and down steep embankments and cliffs, until we finally arrived back at our car. Without question, this had been one of the most exhilarating and thrilling hikes of our lives (total of 8 kilometers/5 miles). 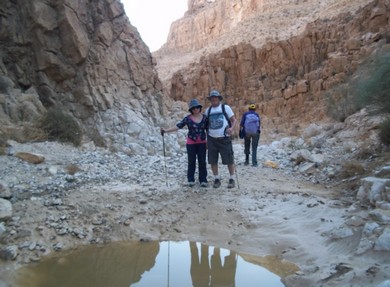 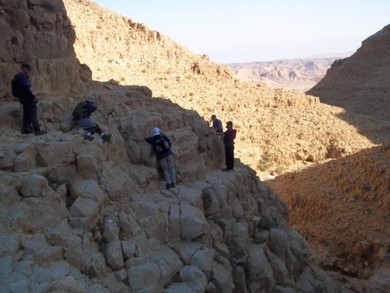 We then drove down to the Dead Sea to the resort hotel area at Ein Bokek and checked into our hotel, the Rimonim Royal Hotel. And this hotel really is 'royal.' It’s a superb-looking hotel with superb accommodations and amenities, superb staff, and superb meals. After checking out the Jacuzzi – a “mchaya” (lifesaver) for our weary bones and muscles - we ate supper at the hotel. It was a royal feast with a huge and tasty selection of meats, fish, hot and cold side dishes, salads and desserts. After supper, we went straight back to our room, and fell on the bed exhausted, but exhilarated, from this action-packed day.    DAY 2: A View from the TopThe next morning, we ate a superb breakfast at the hotel. There was a wide and tasty selection of cheeses, salads, fish, and hot dishes.Right after breakfast, we drove north to the upper northwest corner of the Dead Sea and visited the archaeology site of the ancient city of Qumran near the famous caves in the Judean Desert where the Dead Sea scrolls were found. Because Qumran is a national park, there is an admission fee to get into the park, but is well worth the price. We watched an interesting video presentation (available in several languages) about the history of Qumran, the Dead Sea scrolls, and the nearby caves. We meandered through the ruins (hiking 1 kilometer/ 2/3 mile), including a short hike up to the base of a massive nearby cliff, all the while admiring the mountain and desert landscape all around us, including the actual caves where the Dead Sea scrolls were found on the ridge across from us. A well-placed sign had pointed them out to us. 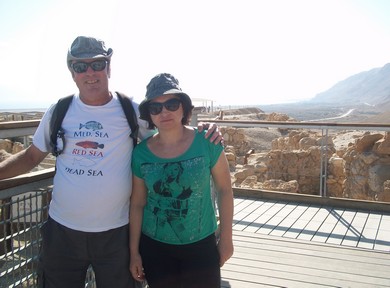 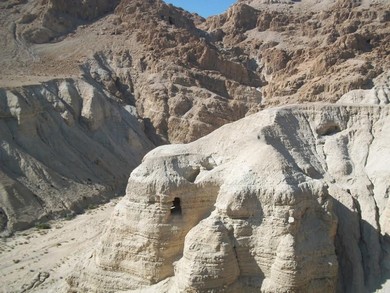 Next, we drove south for about 4 kilometers (2.5 miles) until we came to the Einot Tzukim Nature Reserve on the left. We parked our car there, crossed the highway, and began our hike up to the Rosh Tzukim (“Cliff Head”) lookout. This “Black” trail starts off easy enough but after ½ kilometer (1/3 mile), it became more rugged and we soon found ourselves huffing and puffing up some rocky and steep inclines and challenging terrain. One exhausting kilometer (2/3 mile) later, we reached a flat outcrop of rock, and marveled at the stupendous 360 degree sweeping view of the whole northern portion of the Dead Sea including its northern shore to our left, the ancient city of Jericho and the Jordan Valley to our far left, the Moab Mountains of Jordan rising up behind the entire length of the Dead Sea across from us, the lakes and springs of the Einot Tzukim Nature Reserve below us, and the Tzukim cliffs to our immediate right, left, and behind us. We could see that the trail continued up the cliffs some more to what appeared to be a plateau ridge and the real lookout. However, because my wife had not fully recovered from yesterday’s “extreme” hike, she declared that this wonderful lookout where we now stood was lookout enough. We rested here for a while and then hiked back down to our car (total of 3 kilometers/2 miles). 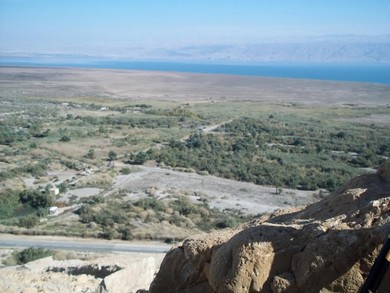 We then drove straight back to the hotel to get ready for Shabbat. We ate our Friday night Shabbat dinner at the hotel, and it was even more royal than yesterday because of Shabat. There was an enormous selection of soups, salads, hot and cold fish and meats, hot and cold side dishes, and desserts. After dinner, we checked out the cabaret show in the entertainment lounge, and then went back to our room where we had no trouble whatsoever falling asleep.DAY 3: A Sabbath StrollThe next morning, we ate a nice Shabat breakfast at the hotel. Because it was Shabbat, there was no cooked food, but the breakfast was nonetheless very good, with a nice selection of salted fish, cheeses, salads and warmed-up kugels, quiches, and pastries. Immediately after breakfast, because we do not travel on Shabbat, we simply walked out of the hotel, crossed the street, turned right, and began hiking along the beautiful promenade which connects the two hotel districts. After about 1.5 kilometers (1 mile), we came upon what looked like a dirt road stretching out into the Dead Sea. Upon closer examination, we saw that it was not a dirt road, but a salt road. Piquing our interesting, we decided to hike on it out to its end. There must have been a high concentration of sulfur in the seabed at this point because the water was a stunningly beautiful, glowing hue of aqua-green. We then walked back to the hotel having hiked four very pretty kilometers (2.5 miles). 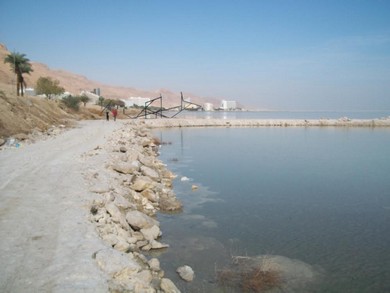 Later in the afternoon we went down to the beach across the street from the hotel and finally availed ourselves of the therapeutic mineral waters of the Dead Sea.When Shabbat ended, we drove back to Tel Aviv basking in the radiance of this wonderful, exhilarating, and highly recommended visit to this wonder of the world and our country!